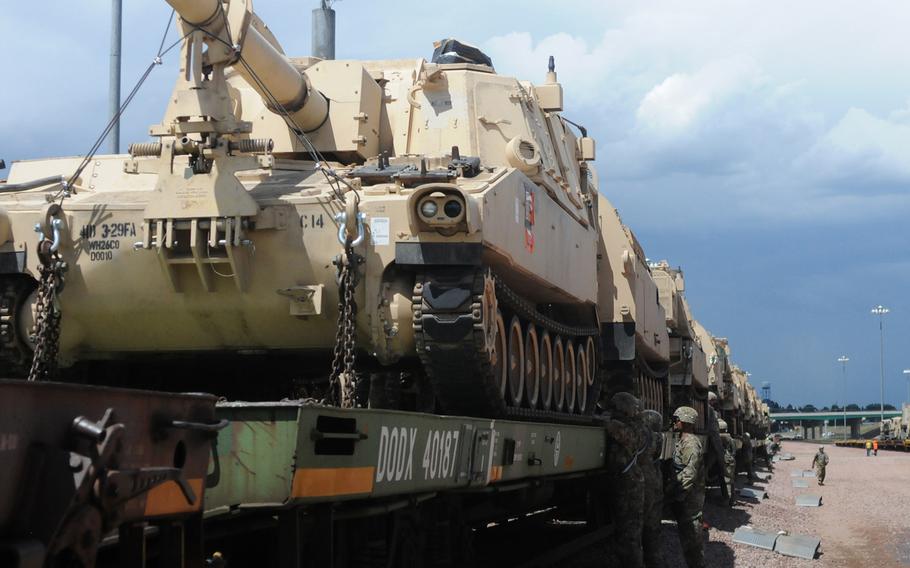 SAN ANTONIO — An aviation brigade and an armored brigade are deploying to Europe this winter as part of NATO efforts to reassure Eastern Europe in the face of an assertive Russia, the Army announced Thursday.

The 3rd Armored Brigade Combat Team of the 4th Infantry Division, based at Fort Carson in Colorado, will send 4,000 soldiers, the Army stated Thursday in a news release. An Army spokesman confirmed the unit will begin moving in January.

The Fort Drum, New York-based 10th Combat Aviation Brigade will deploy 1,750 soldiers, more than half the brigade, the Army stated in a separate news release, with earlier reports saying the unit will arrive in Germany in March.

Both units will support of Operation Atlantic Resolve, the growing U.S. effort to reassure NATO allies in the region in response to Russian intervention in Ukraine in 2014.

The Pentagon has significantly increased the presence of troops and warfighting equipment in Europe to counter Russian aggression, with $3.4 billion allocated this fiscal year for the ongoing European Reassurance Initiative — tripling last year’s budget.

Tensions between Russia and the United States have increased since the Ukrainian incursion and annexation of Crimea, and most recently Syria, where Russian warplanes have aided President Bashar Assad’s regime in its civil war against rebel groups, some aided by U.S. training and equipment, and the Islamic State group.

Concerns have mounted of collisions in Syrian airspace between U.S. and Russian jets. The Pentagon said last week a Russian fighter jet and a U.S. aircraft came within a half-mile of colliding during a night mission over Syria in mid-October. Pentagon officials held a video conference Thursday to discuss ongoing measures to prevent mishaps, a Defense Department release stated.

The 3rd Armored Brigade will be the first continuous rotation armored brigade to deploy to Europe, with the intent of a permanent heavy armor presence, said Army Lt. Col. Jason Brown, a 4th Infantry Division spokesman.

The brigade will arrive in Poland and will fan out across the continent, Brown said.

“I am confident we are the right heavy brigade to continue the armored presence in Europe,” Col. Christopher R. Norrie, commander of 3rd Armored Brigade, said Thursday in the release.

“Living and training alongside our NATO allies and partners on a daily basis will provide ample opportunities to build a comprehensive team that strengthens defensive capabilities and deters aggression in Europe,” he said.

The 10th Combat Aviation Brigade will arrive with approximately 60 aircraft, including CH-47 Chinooks, UH-60 Blackhawks and medevac helicopters, said Maj. Isaac Taylor, a 10th Mountain Division spokesman. The brigade will be headquartered in Germany, and the brigade’s units will be forward-based at locations in Latvia, Romania and Poland, Stars and Stripes reported Thursday.

Their deployment comes as allies in Europe have identified an increased need for aviation units in Europe to counter Russian power, and as a complement to the main focus on tanks and infantry.