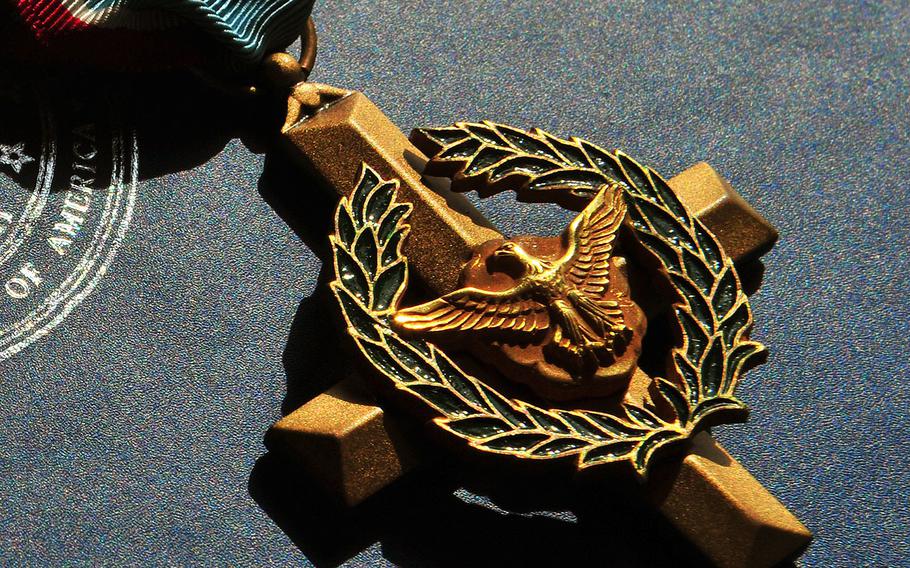 The Air Force Cross is second only to the Medal of Honor, and is awarded for extraordinary heroism in the face of danger. (Ryan Conroy/U.S. Air Force)

The Air Force Cross is second only to the Medal of Honor, and is awarded for extraordinary heroism in the face of danger. (Ryan Conroy/U.S. Air Force) 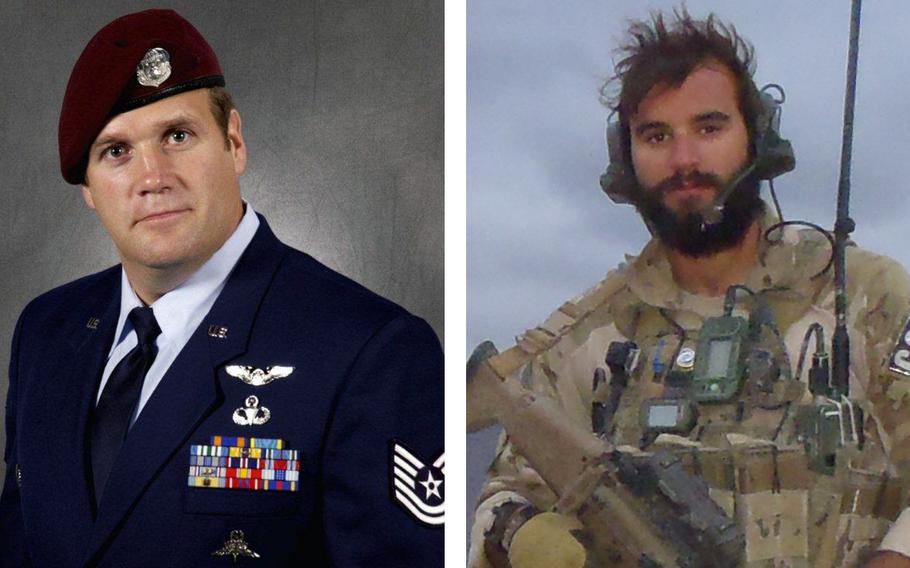 Retired Master Sgt. Keary Miller, left, and Staff Sgt. Christopher Baradat are among those who have had their awards upgraded from Silver Stars to Air Force Crosses as part of the Pentagon-wide review of more than 1,100 medals awarded across the services for the wars in Iraq and Afghanistan. (DOD)

WASHINGTON — The Air Force awarded its highest honors Thursday to two airmen for their acts of valor serving in Afghanistan more than a decade apart.

Both airmen had their awards upgraded from Silver Stars to Air Force Crosses as part of the Pentagon-wide review of more than 1,100 medals awarded across the services for the wars in Iraq and Afghanistan after questions were raised about whether some of the actions had warranted higher honors. The Air Force has reviewed 147 medals awarded for action in Iraq and Afghanistan since 2001, including 12 Air Force Crosses and 135 Silver Stars. To date the Air Force has upgraded 10 medals.

The Air Force Cross is given for extraordinary heroism while engaged in military operations against an opposing foreign force. It is the highest Air Force award, second only to the Medal of Honor.

Miller, a technical sergeant at the time, deployed to Afghanistan as a pararescueman in November 2001 with the 23rd Special Tactics Squadron, Joint Special Operations Aviation Component-North.

On March 4, 2002, Miller was on an MH-47 Chinook helicopter flying into the mountains to save two servicemembers who were trying to evade capture. The servicemembers had been in a firefight with al-Qaida and Taliban militants in the Paktia Province of Afghanistan, a snow-covered mountainous region south of Kabul.

“As [Miller’s] helicopter approached the landing zone, the team immediately began to receive heavy enemy fire from rocket-propelled grenades and machine guns. Just prior to landing, accurate enemy rocket-propelled grenades slammed into the cockpit and tail rotor, crippling the aircraft and forcing it to crash land,” the Air Force said in the official narrative accompanying the award.

Miller and the other forces on board immediately came under fire as they tried to exit the downed aircraft. Four soldiers were killed and five others wounded. Miller began returning fire where he dragged the co-pilot, who had been shot in the leg, to safety at the rear the aircraft with the other wounded.

The firefight would continue for the next 15 hours, testing everything the team knew about survival. As the hours went on, Miller and the team were pinned and low on ammunition.

“As the duration of the fight increased, Sgt. Miller removed M-203 and 5.56 rounds from the deceased and, in an act of extraordinary courage, moved through some of the day’s heaviest rocket-propelled grenade, mortar, and small arms fire while distributing the ammunition from position to position,” the Air Force said.

But Taliban and al-Qaida fighters knew their location and with each mortar, those enemy forces got closer to directly hitting the remaining troops. Miller re-entered the line of fire multiple times to move the wounded to a bunker, where soldiers found the bodies of the two servicemembers who they had come to rescue initially. Miller secured the bodies for movement with the downed helicopter’s rappel rope, in case they had been booby-trapped by enemy forces.

Then their bunker position started to take grenade fire, “mortally wounding another pararescueman and critically injuring an Army medic,” the Air Force said.

Miller began treatment of the additional wounded, “moving from one to the next to provide life-saving medical intervention amidst relentless enemy attacks,” the Air Force said.

U.S. forces started to get the upper hand in repelling the al-Qaida and Taliban fighters. But the outside temperature was dropping quickly.

“Counteracting hypothermia became paramount,” the Air Force said. Miller “again proceeded to the helicopter to recover medical supplies, blankets, and sleeping bags. This proved to be inadequate in the snow-covered mountains, and Sgt. Miller stripped insulation from the helicopter’s fuselage in order to construct shelters and warm the patients.”

As another rescue helicopter finally secured Miller and the wounded, he kept providing aid, and is credited with “saving the lives of four seriously wounded Americans,” the Air Force said.

Baradat’s heroism would take place more than a decade later, in a region just north of where Miller had fought.

On April 6, 2013, Baradat was a combat controller attached to an Army Special Forces team in Kunar Province, Afghanistan. They were called in as a Quick Reaction Force for 66 Afghan forces who had come “under intense attack by 100 insurgents, pinning them down and preventing their escape.”

The Afghan forces were trapped by militants in a valley used by the Taliban and al-Qaida as a main route to move arms and fighters. The route was narrow and the terrain rugged, slowing the U.S. forces’ armored or lighter trucks as they tried to reach the trapped Afghans.

So Baradat and his team got out on foot. As they closed in on the Afghans, the U.S. rescue unit also began taking fire.

“As a hail of bullets impacted all around them ... Baradat and his dismounted team sprinted 200 meters east along the valley road, taking cover in a small mud compound approximately 800 meters from the pinned down element,” the Air Force said.

Baradat communicated with an overhead A-10 ground-attack aircraft to direct its 30-mm gun on the enemy forces. The rescue team then moved forward, reaching a compound that was just 200 meters from the trapped Afghans.

Then they came under fire again.

“As [Baradat’s] team passed this compound, gunfire raining down on the isolated [Afghans] increased dramatically and the 100 enemy fighters redirected their entire volume of fire at [Baradat’s] team,” the Air Force said.

But the compound walls prevented Baradat from communicating with C-130 and A-10 aircraft for support. So he stepped into the line of fire.

“Ignoring repeated shouts from his team leader and teammates to take cover, Baradat willfully remained in the compound’s unprotected, open courtyard in order to spot enemy locations and maintain communications with the [close-air support] assets and other friendly positions,” the Air Force said.

“Despite enemy rounds impacting inside the courtyard and in such close proximity that dirt from the impacting bullets sprayed all over him,” Baradat remained exposed to direct the gunships.

The hail of gunfire from the overhead U.S. aircraft allowed the rescue team to free the Afghan forces. But the way out, back along the narrow valley road, would be just as dangerous, and the column of exiting forces started to take fire again.

“Realizing that he couldn’t effectively communicate with aircraft or keep eyes on the flanking enemy positions from inside the vehicle … Baradat knowingly chose to reject the safety of the armored vehicle and took up a position on the exterior of the vehicle. Exposed to enemy fire, he balanced himself on the vehicle’s running board while one of the occupants held onto his belt.”

As their escape vehicle lurched along the narrow path, Baradat kept calling in support fire from aircraft. The road’s rocky wall scraped “his back, head and heels of his boots,” and enemy machine gunfire ricocheted off the rock wall behind him, spraying rock fragments on his head and body.

In those three hours of intense attack, Baradat would communicate with six A-10s and two AC-130s and direct 13 500-pound-bombs and approximately 7,000 rounds of ammunition before the convoy would successfully make it out of the valley.