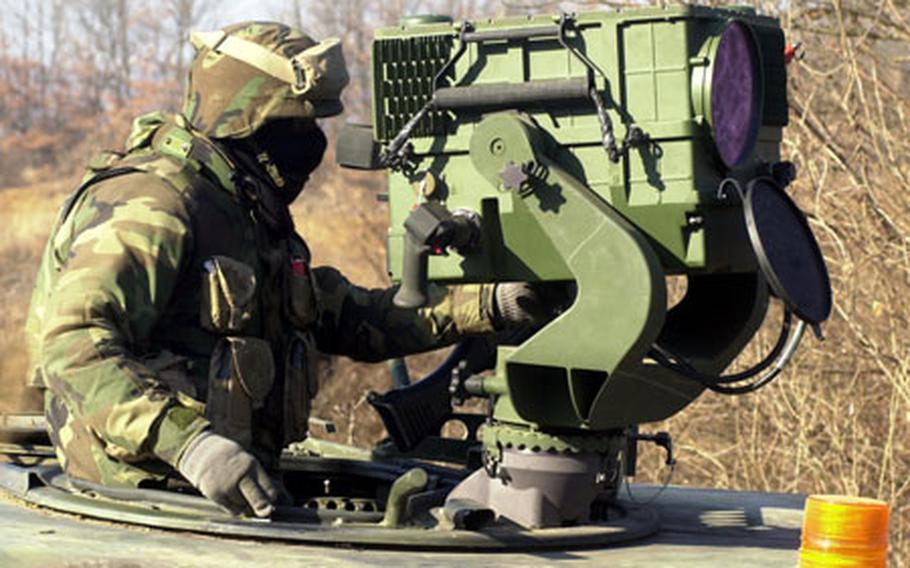 A soldier looks for opposing forces on the battlefield using the Long-Range Advanced Scout Surveillance system at a training area near Yeoncheon on Friday. The battle scenario was part of the 1st Heavy Brigade Combat Team&#39;s Iron Focus exercise, which continues this week. (Erik Slavin / S&S)

A soldier looks for opposing forces on the battlefield using the Long-Range Advanced Scout Surveillance system at a training area near Yeoncheon on Friday. The battle scenario was part of the 1st Heavy Brigade Combat Team&#39;s Iron Focus exercise, which continues this week. (Erik Slavin / S&S) 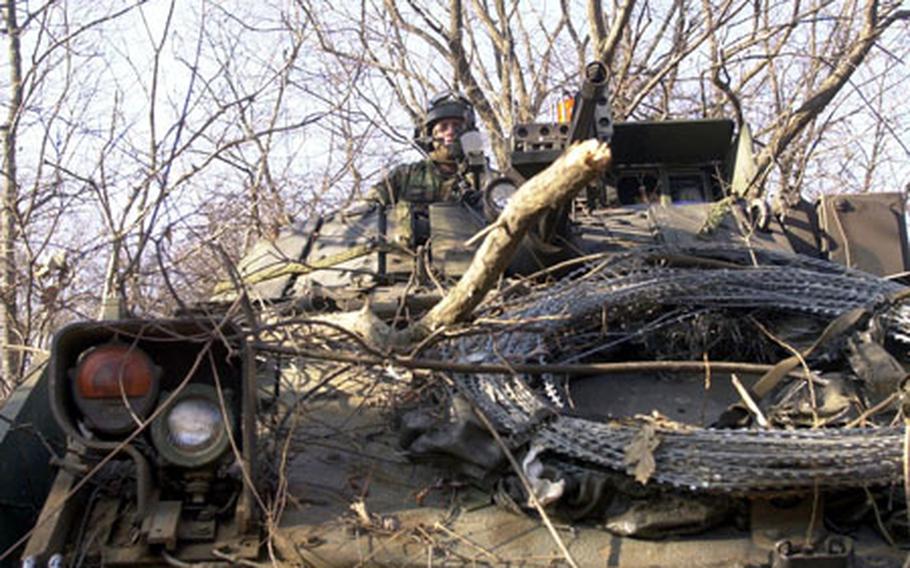 Staff. Sgt. Frank Howard awaits simulated battle with opposing forces while concealed under a tree line in his Bradley Fighting Vehicle at a training area near Yeoncheon on Friday. (Erik Slavin / S&S)

YEONCHEON, South Korea &#8212; Sgt. Sean Burke and the rest of his scout squad gazed across a chunk of ruddy land lined by a hilly ridge of leafless trees and orange clay.

Within the trees, three tanks from the 2nd Infantry Division&#8217;s 1st Battalion, 72nd Armor Regiment concealed themselves, along with even more Bradley Fighting Vehicles.

However, Burke said the opposing forces had been at the Rooster 8 training area since the beginning of Iron Focus, the 2,900 soldier-strong, 1st Brigade Heavy Combat Team multi-week exercise, while Burke and his men, on Friday, had been on site only a couple of days.

As he spoke, Op4 cavalry scouts lurked through trees, attempting to pinpoint blue force positions and send them back to their armor component.

To compensate, Burke and another team peered across the battlefield with the Long-Range Advanced Scout Surveillance system. It allows them to see the enemy from several miles away in detail, and from even farther away in thermal imaging mode.

The brigade soldiers at the opposing forces headquarters had a pretty good idea what they would be up against, but it didn&#8217;t affect their confidence, or their trash-talking.

Actors often say that while everyone roots for the hero, it&#8217;s more fun to play the villain. The black-clad opposition forces clearly relished their role as spoilers.

&#8220;They came in here thinking they were the Pittsburgh Steelers from last year, when they&#8217;re really the Steelers from this year,&#8221; said Sgt. Zane Young, referring to the defending Super Bowl champions who recently missed the playoffs.

However, most of the soldiers placed the talking in context. Friday&#8217;s scenario was held to improve tactics on both sides and help commanders see how their soldiers respond to the pressure of being under attack.

It was very effective, added a smiling Pfc. Robert Whalen.

The tactics have kept the blue forces on their toes, said Staff. Sgt. Frank Howard as he watched for the enemy from the top of his Bradley vehicle.