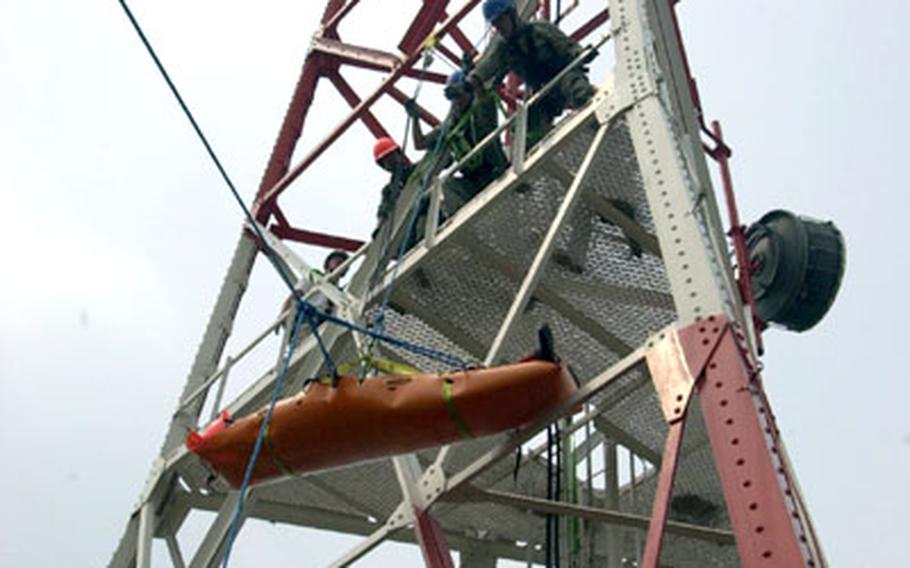 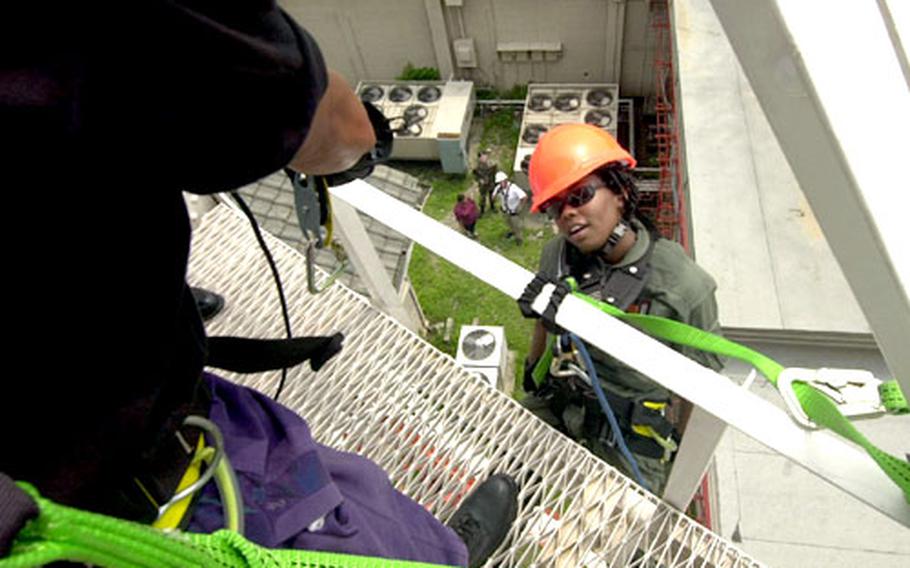 Spc. Erica Tilley prepares to be lowered from a radio tower on Yongsan Garrison during rescue training. (T.D. Flack / S&S) 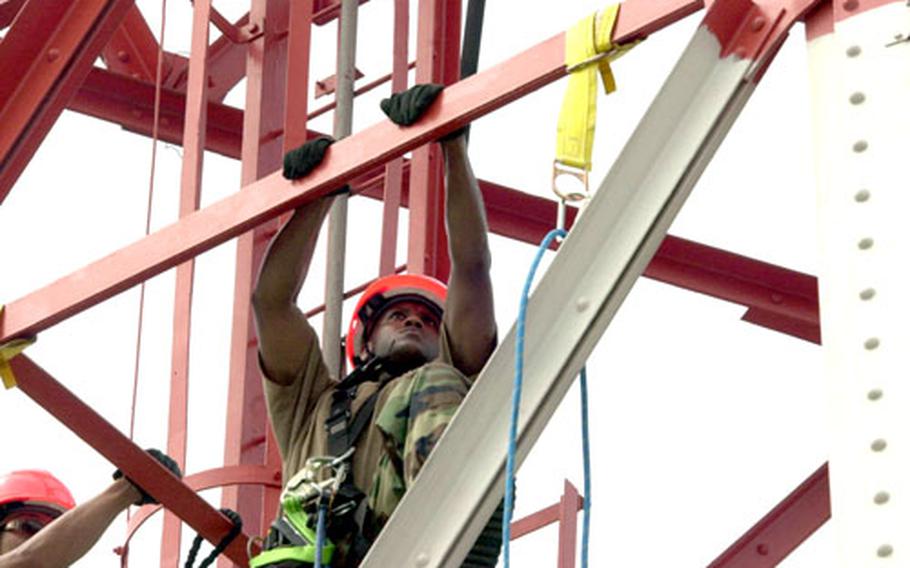 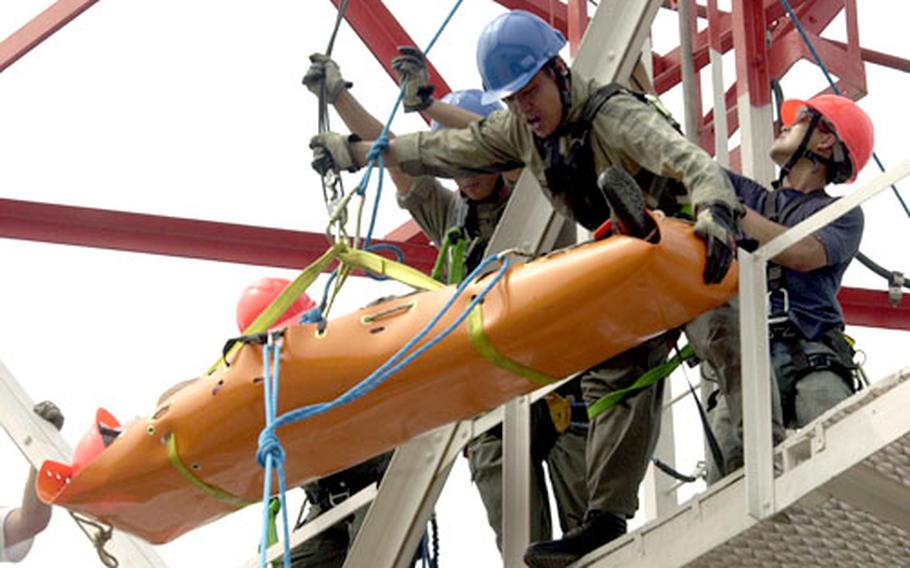 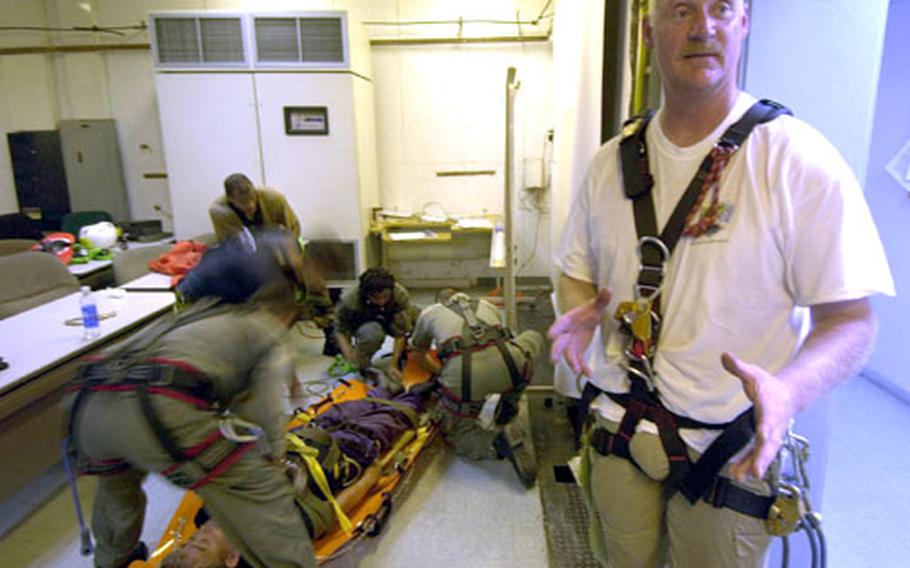 Mickey Kimball, 1st Signal Brigade safety manager, said the training is crucial for the maintenance support team soldiers who climb hundreds of feet up radio towers as part of their daily duties.

&#8220;Most towers are in remote locations,&#8221; he said. If an emergency arises, there aren&#8217;t really any South Korean emergency response teams to call, Kimball said. And some towers are so remote that the soldiers couldn&#8217;t even use a cell phone to call for help.

In November, a group of soldiers from the 36th and 41st signal battalions and a handful of South Korean firefighters from Yongsan Garrison went through the weeklong basic course. Last week, Schillreff was back in South Korea for a day of refresher training that included horizontal litter rescues. He held one class in Daegu and another at Yongsan.

The students said the training is vital.

During the Thursday class at Yongsan, Schillreff and the students practiced lowering &#8220;victims&#8221; from a radio tower platform about 50 feet off the ground. With temperatures in the 90s, it was grueling, realistic training, the soldiers said.

And, Kimball said, having two photographers and a team from American Forces Network recording every move put added pressure on the students.

Schillreff welcomed the pressure, saying it ensures the students learn the skills.

When practicing securing a victim in the litter, he used a strict five-minute time limit.

He said in real emergencies, people will often walk in a circle or step side-to-side instead of reacting because there are 43 to 46 different steps they&#8217;re thinking about. But if everyone knows what role they&#8217;ll play in a scenario, from who calls the medics to who ties which knots, they&#8217;ll succeed, he said.

Kimball said the teams train with specifics in mind &#8212; including developing pre-accident plans that detail everything from the nearest hospital to which locations require an extra vehicle that can double as an ambulance if soldiers are unable to call for help on cell phones.