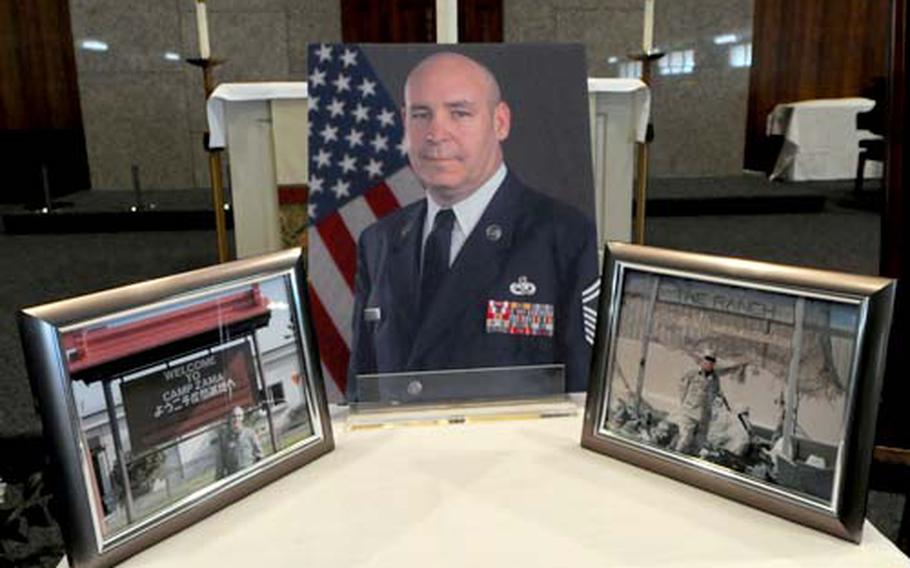 A display of photos of Senior Master Sgt. James G. Strong was part of his memorial service at the Yokota Air Base, Japan, chapel on Thursday. (Laszlo Babocsi/Courtesy of the U.S. Air Force)

A display of photos of Senior Master Sgt. James G. Strong was part of his memorial service at the Yokota Air Base, Japan, chapel on Thursday. (Laszlo Babocsi/Courtesy of the U.S. Air Force) 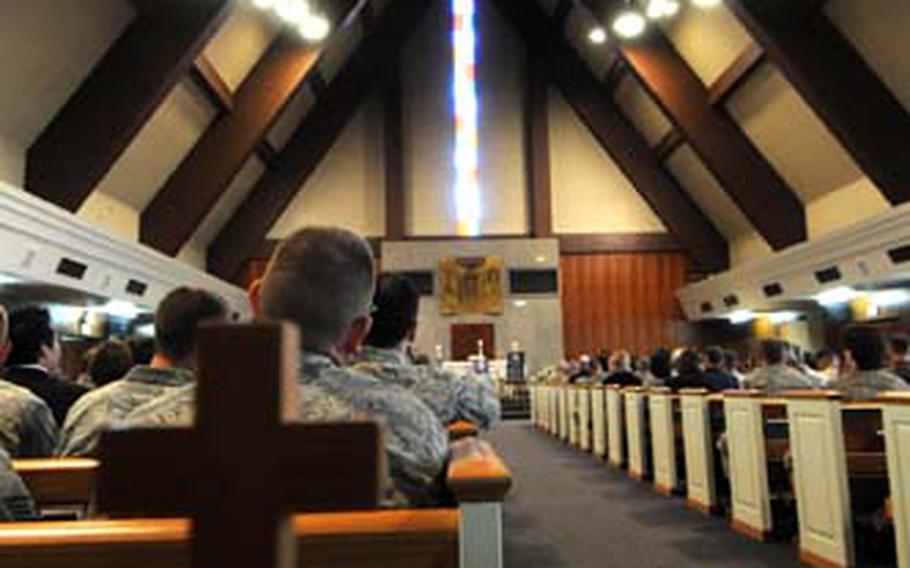 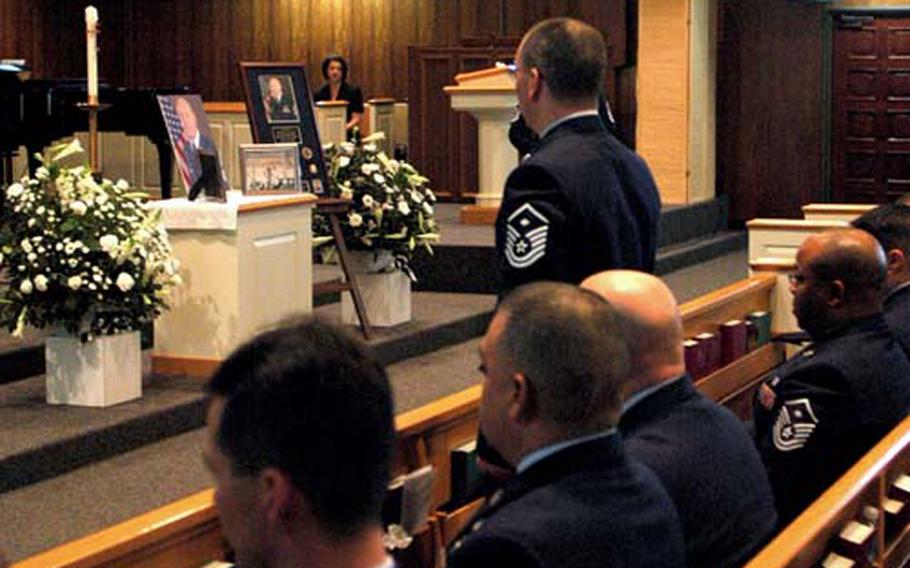 Yokota first sergeants stand up as their names are called out during the final roll call at the memorial service. (Bryce S. Dubee / S&S)

YOKOTA AIR BASE, Japan &#8212; He was tough. He was opinionated. And he always held his airmen to a high standard.

But to those who knew Senior Master Sgt. James G. Strong, there was a softer side to him as well &#8212; a side that cared deeply about his troops.

"He tried to come off as a tough, rugged, old first sergeant," Senior Master Sgt. Mike Yabes said. "But, in fact, he was probably the biggest teddy bear on base."

Hundreds of people filled the base chapel to capacity Thursday to remember the gruff and well-regarded first shirt of the 36th Airlift Squadron who died last Friday shortly after he collapsed during a physical fitness test.

A first sergeant for 12 years and stationed at Yokota for more than five, Strong, 47, served as first sergeant in several other units on base before arriving at the 36th.

Airmen working at the ceremony quietly moved along the crowded isles, handing out tissues to saddened members of the community as co-workers and squadron leaders paid tribute to Strong.

"He was fair, but tough, and made sure his airmen followed the standards," said Chief Master Sgt. Michael Sundberg, the 36th&#8217;s squadron superintendent. "However, he expected the same from base agencies &#8212; to take care of his airmen."

Yabes, who is "regrettably" the acting first sergeant for the 36th, agreed.

"When it came to taking care of his folks, the man was a bulldog," he said.

Both men remembered Strong as a fun-loving individual with a joy for life and his family.

But while a cold beer and good cigar were preferable to spending time in the gym, Sundberg said, Strong knew the importance of being mission ready and had been working to get in better shape, even quitting smoking, in preparation for a March 2009 deployment.

And he knew the importance of making first impressions count.

Mayheu said that in an era of e-mails and faceless communication, the world needs people like Strong to knock on doors, take responsibility and get results.

"You made it easy for us," Mayheu said. "And you made it so hard to say goodbye."

A memorial fund has been set up for his family through the Yokota Community Bank, said Sundberg, who added that anyone interested in making a donation can simply ask any teller about the Strong Family Fund.

He said he&#8217;s received calls from throughout the Air Force from people who knew Strong, offering their condolences and asking how they can help.

Strong is survived by his wife, Rita, and their three children.