Families line up on the parade deck at Camp Horno, on Camp Pendleton, Calif., on Monday, Aug. 25, 2014, to welcome the Marines of 1st Marine Regiment back from their deployment to Helmand province, Afghanistan. (Jennifer Hlad/Stars and Stripes)

Families line up on the parade deck at Camp Horno, on Camp Pendleton, Calif., on Monday, Aug. 25, 2014, to welcome the Marines of 1st Marine Regiment back from their deployment to Helmand province, Afghanistan. (Jennifer Hlad/Stars and Stripes) 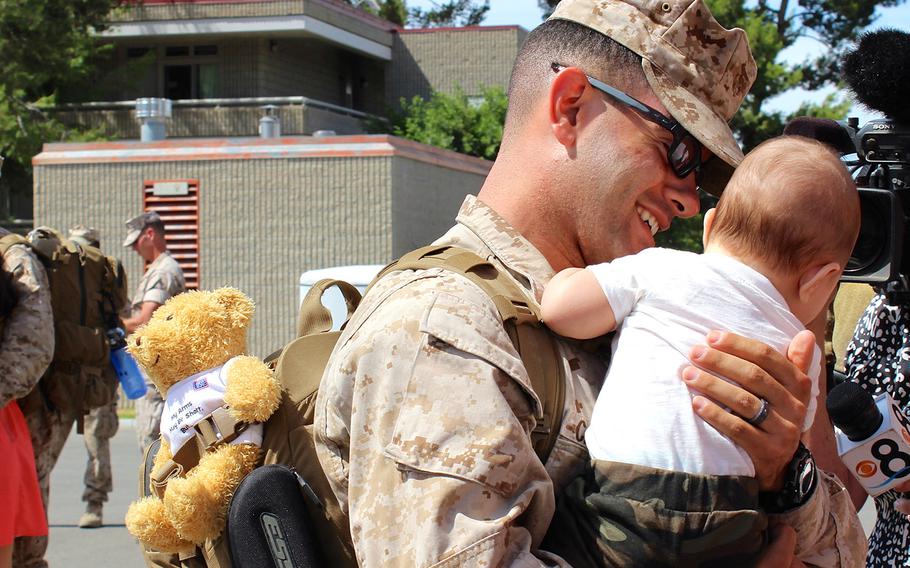 Cpl. Eric Candelario meets his 4-month-old baby, Liam, for the first time on Monday, Aug. 25, 2014. Candelario deployed with 1st Marine Regiment to Helmand province, Afghanistan, where his unit headed up the task force in charge of security for Camp Leatherneck and Camp Bastion. (Jennifer Hlad/Stars and Stripes) 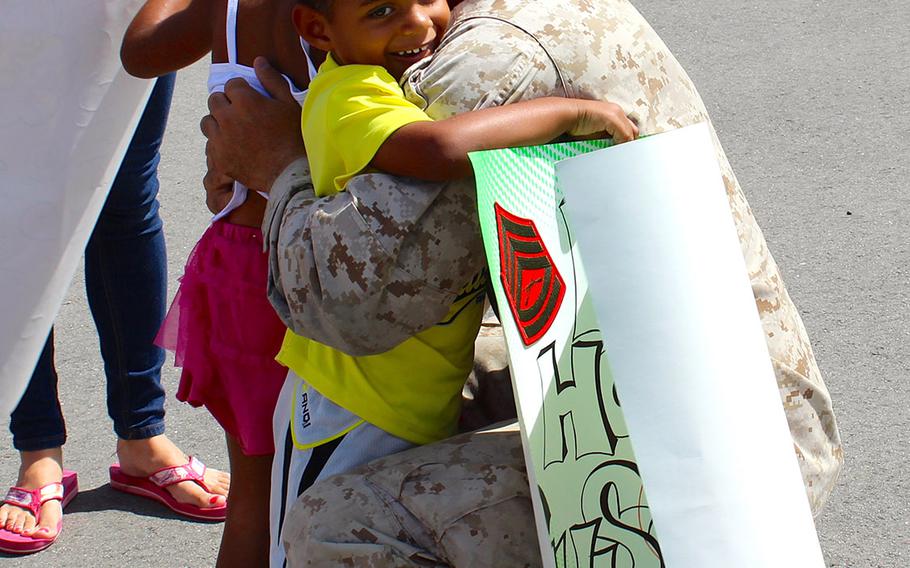 A couple embraces Monday, Aug. 25, 2014, at a homecoming ceremony for 1st Marine Regiment. About 40 Marines left Camp Pendeton, Calif., in February and had planned to stay in Afghanistan until December. Instead, they returned early after handing over control of the task force in charge of security for Camp Bastion and Camp Leatherneck to the Marines of 1st Battalion, 2nd Marine Regiment. (Jennifer Hlad/Stars and Stripes) Col. Peter Baumgarten, commanding officer of 1st Marine Regiment, praises his Marines on Monday, Aug. 25, 2014, shortly after returning from a six-month deployment to Helmand province, Afghanistan. "It's time for a well-deserved break," he said, before sending them home with their families. (Jennifer Hlad/Stars and Stripes)

CAMP PENDLETON, Calif. — When the 1st Marine Regiment left for Afghanistan in February, they weren’t anticipating being home until the end of the year. But on Monday, they became the last Marine regiment to return from Afghanistan — four months early.

Their families were certainly not upset about the schedule change.

Janice Perry and her two children all made posters for the occasion; Janice’s poster noted that her husband, Chief Warrant Officer Jarod Perry, had been gone for 10,072,800 seconds, and it was time for the Marine Corps to give him back.

Capt. Tobin Walker, the unit’s assistant operations officer, was one of at least four fathers meeting a new baby for the first time at the homecoming. Walker’s daughter, Moira, is five months old.

Walker said the deployment was busy and interesting, with all the changes happening at rapidly shrinking Camp Leatherneck, but he was glad to see his family.

Another new baby, 4-month-old Liam Candelario, held a stuffed doll with a picture of his father, Cpl. Eric Candelario, printed on it. And when Candelario got off the bus, he had a replacement toy strapped to his pack: A teddy bear wearing a USO T-shirt.

Cpl. Trevor Bissett said he enjoyed his first deployment, but that he was “more than ecstatic” when he learned they were coming home early.

First Marine Regiment deployed much lighter than usual when it left for Leatherneck. Instead of the 350 Marines commander Col. Peter Baumgarten was planning to take, he learned a few months before the deployment that he would only be taking 45.

The trimmed-down unit was in charge of an international coalition of more than 3,000 troops serving as the security force for Camp Leatherneck and Camp Bastion in Helmand province.

Baumgarten said the security force worked to make sure the camp was secure, and used guard towers, camera systems, patrols and “disruptive operations” to maintain security several kilometers out from the base’s perimeter.

The 2012 attack on Camp Bastion that killed two Marines, wounded nine others and destroyed several jets was always in the back of everyone’s mind, Baumgarten said.

It’s hard to know whether the security force’s actions thwarted any specific plans, but there were no enemy attacks of any kind during their time there, Baumgarten said, and the situation when they left was as quiet as they had ever seen.

The regiment turned over its duties to 1st Battalion, 2nd Marine Regiment, which had been part of the security task force since April.

And while there may have been some “professional disappointment” from 1st Marines that they didn’t get to see the mission through until Camp Leatherneck is closed at the end of the year, Baumgarten said it was the right time to head home.

“I’d love to stay to the end,” he said, “but I understand that we’ve got to lighten the load [there].”

During the regiment’s deployment, the last Marine advisers in Sangin district left the area for good — and shortly afterward, the Taliban launched a vicious attack. The Afghan forces performed well, with limited support from international forces, Baumgarten said, but questions remain about how well Afghan forces will perform, and how much support will be able to get from Kabul after coalition troops leave.

Baumgarten deployed twice to Iraq, including once near the end of U.S. operations there, and said it was “very disheartening” during this deployment to see areas that had taken years to maintain and build lost in just a matter of days.

He said Iraq and Afghanistan are very different and he tries not to draw parallels, but said Iraq should be a “cautionary tale” for the Afghan government.

Before the Marines left with their families Monday, Baumgarten presented an award to one corporal and then spoke about the historic significance of the event.

First Marine Regiment was the last Marine infantry regiment in combat in Vietnam, he said, and the unit’s commander at the time, who later became the commandant of the Marine Corps, brought the regiment’s colors home in his suitcase.

This time, the unit brought the colors home in a carrying case, and flew them as they celebrated the end of their deployment.

“We’re so glad to be home,” Baumgarten said. “It was a great honor and a great opportunity … now it’s time for a well-deserved break.”