1st Infantry Division's Europe exodus a trickle, not a flood 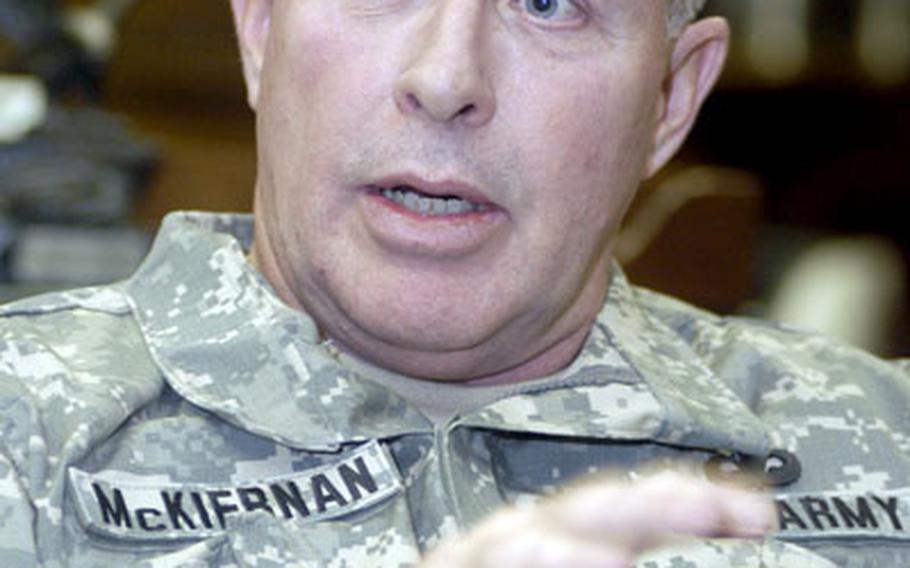 For the U.S. Army, it&#8217;s big, the first major forces realignment in 60 years. For Germany, it&#8217;s big &#8212; a nearly two-thirds reduction in a population that rented apartments, bought cuckoo clocks and drank a lot of beer.

But for individual soldiers within U.S. Army Europe, Army transformation is pretty much business as usual, officials say.

Although the transformation plan &#8212; which will send the 1st Infantry and 1st Armored divisions back to the U.S., inactivate some units and convert others &#8212; calls for 62,000 U.S. troops stationed in Europe to become 25,000 within the next four years, the Army is shrinking that force through natural processes, not preparing for a mass exodus.

The 1st ID, in the middle of its transformation process that is scheduled to end with leaving W&#252;rzburg this summer for Fort Riley &#8212; has already seen some 35 percent of its Germany soldiers dispersed, Coppernoll said.

They have either left the Army, moved to another duty station or been reassigned, Coppernoll said.

The 1st ID actually underwent a significant drawdown before the news even came out that they were supposed to do so. That happened when the division returned nearly a year ago from Iraq and a stop-loss, stop-move order was lifted. Personnel actions that had been on hold happened all at once. Soldiers got out of the Army. Soldiers went to new assignments.

The next big group happened after a July announcement that said the 1st ID would be gone from Germany by October 2006, along with a list of units that were to inactivate or convert to something different. After that, Coppernoll said, &#8220;We stopped receiving replacements.&#8221;

The 4th Battalion, 3rd Air Defense Artillery Regiment, with some 500 soldiers, learned when in Iraq that the unit was to be inactivated. They returned in February, stop-loss was lifted in May, and by June the unit had lost 40 percent of its soldiers, Coppernoll said. By July, 55 percent had disappeared, and by August, 65 percent.

Among them were 40 who went to the 69th Air Defense Artillery Brigade in Giebelstadt and about 200 whose military jobs, along with their unit, were being done away with. Many of them headed off to training to learn new specialties, Coppernoll said.

The unit inactivated in September, with 25 people left. Those 25, Coppernoll said, became members of the new Air Missile Defense Detachment of the 1st ID, and some of them will return, along with members of the division&#8217;s headquarters, to Fort Riley.

The 3rd Brigade Combat Team in Vilseck, also set to move to Fort Riley, has over the past several months gone from 3,500 troops to about 500 troops. What happened to the rest? PCS, ETS and reassignment, Coppernoll said.

One reassignment site was the 1st ID&#8217;s 2nd Brigade Combat Team. That unit, although part of the 1st ID, is and will remain at full strength. That&#8217;s because it is not returning to the U.S. quite yet. It is returning to Iraq this spring.

There have been hiccups along the way. Some families with Company A of the 121st Signal Battalion, for example, were given just a couple of months to move from W&#252;rzburg to Schweinfurt after the unit, part of an inactivating battalion, was reassigned to the 2nd Brigade Combat Team.

For them, battalion commander Lt. Col Jim Garrison said last fall, &#8220;The transformation happened fast, and for the families it was really fast.&#8221;