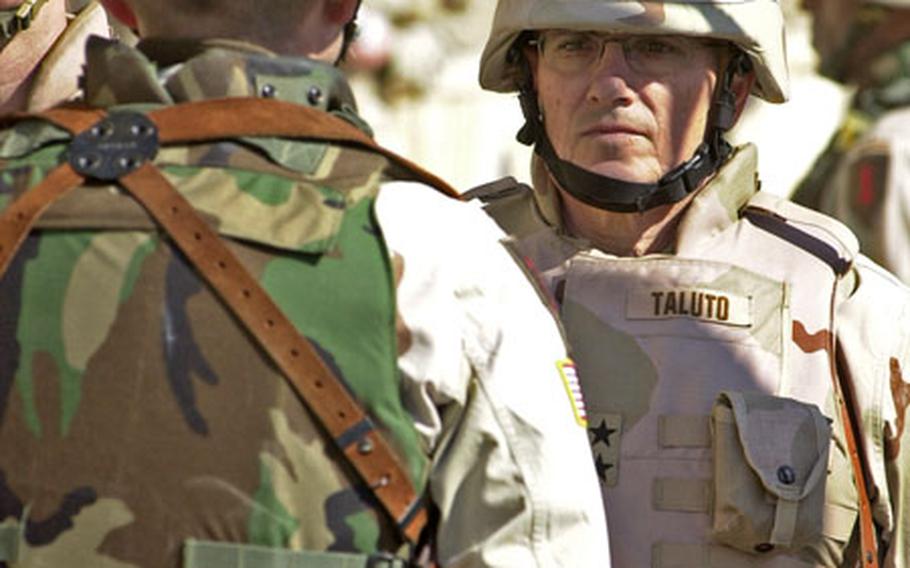 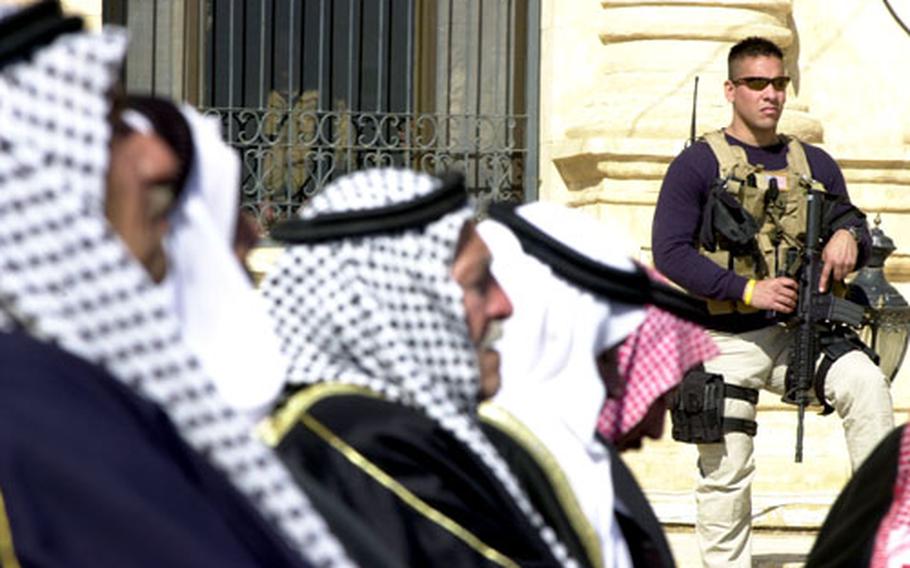 Security was heavy at the ceremony as about a hundred Iraqi dignitaries and U.S. civilians attended the transfer of authority to the 42nd Infantry Division from the 1st Infantry Division. (Terry Boyd / S&S)

The end of his division&#8217;s yearlong deployment brings &#8220;irreversible momentum&#8221; toward Iraqi participation in self-governance that will thwart the insurgency, Batiste said.

With the Jan. 30 elections, the Iraqi people showed the courage to choose their leaders and control their destiny, he said. Quoting an Iraqi woman, the elections &#8220;were like a bullet in the heart of the enemy,&#8221; Batiste said, while acknowledging the 1st ID&#8217;s own losses of more than 100 soldiers killed and 1,000 wounded.

The Big Red One increased combined operations with new, better-led Iraqi army units and oversaw 2,000 reconstruction projects worth about $1 billion, he said.

Taluto took time to thank by name several 1st ID officers and soldiers, including Batiste and Command Sgt. Maj. Corey McCarty, for their assistance in helping the 42nd transition.

While there has been dramatic progress during the last few months, there&#8217;s much to do, Batiste said in a Sunday interview. The new government must undo decades of Saddam Hussein&#8217;s Arab-centric, Sunni-based rule and integrate Kurds, Turkmen and Shiite Iraqis, he said.

The 42nd ID&#8217;s tenure got off to a deadly start. One American soldier was killed and three wounded Monday when a bomb detonated near their patrol in northern Iraq, the military said.

The explosion occurred when the soldiers from Task Force Liberty were on a combat patrol near the town of Baqouba, 35 miles northeast of Baghdad, the U.S. command said in a statement. The identities of the soldiers were withheld pending notification of the family members.