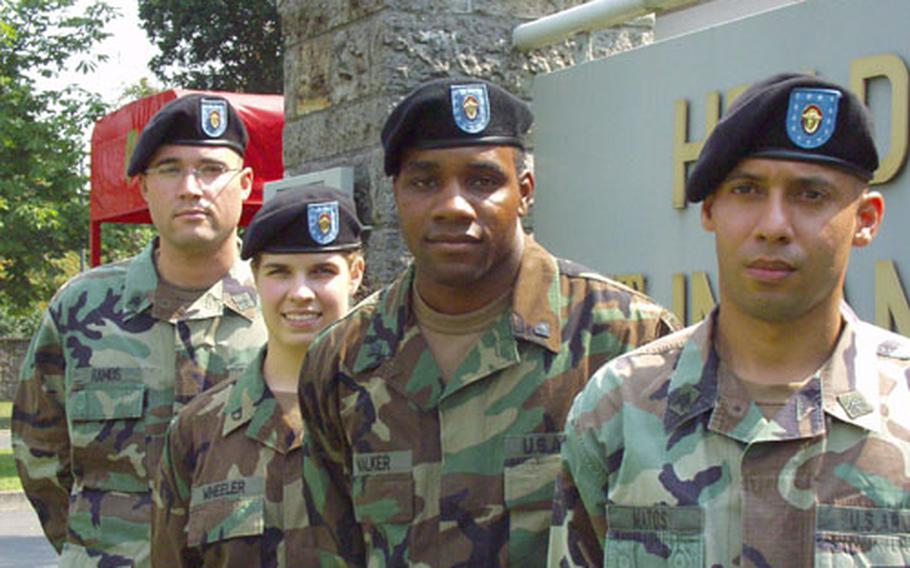 More than 2,000 soldiers from the Würzburg, Germany-based 1st Infantry Division returned in late July from an extended eight-month peacekeeping deployment in Kosovo. The recent returnees included, from left, Sgt. Javier Ramos-Garcia, Pfc. Kara Wheeler, Spc. Jamie Walker and Sgt. Rafael Matos. All are members of the 1st ID&#39;s headquarters company. Upon their return, they learned they will be deploying to Iraq next spring for one year. (Steve Liewer / S&S)

In the early days of the Iraq invasion, soldiers such as Spc. Mark Sapp and Pfc. Jake Brice crowded around televisions in chow halls and recreation tents to see what war looked like up close.

The soldiers, both members of the 1st Infantry Division&#8217;s 82nd Engineer Battalion from Bamberg, Germany, had arrived at Camp Bondsteel, Kosovo, with their unit four months earlier. Now they watched with a mix of relief and envy as other soldiers rode off to battle.

Over the past three weeks, more than 2,000 1st ID soldiers have returned home to Germany from an extended eight-month peacekeeping tour in the former Yugoslav province that was a killing ground only four years ago. On Thursday, the division commander, Maj. Gen. John Batiste, formally welcomed them home at a ceremony in Vilseck, Germany.

Before the start of the war on terror, peacekeeping in Kosovo stood out as perhaps the Army&#8217;s toughest tour. Ethnic tensions between the long-oppressed Albanian majority and the Serbian minority still simmered, and sometimes they still killed one another.

Afghanistan and Iraq have pushed the Army&#8217;s efforts in Kosovo far into the shadows. The 1st ID troops sometimes felt forgotten as they carried out their duties, but they came home to yellow ribbons and banners and cheers from their families, two months later then they&#8217;d originally expected.

The conditions at Bondsteel and the two other primary U.S. camps, Monteith and Magrath, proved far better than many of the soldiers expected.

Kosovo itself was something of a surprise to soldiers who had never visited Third World countries. Although the area is distinctly European, living standards don&#8217;t match up with what soldiers see in Germany.

Sapp and Hurwitz spent most of their rotation as gate guards, six monotonous months of checking ID cards and searching underneath trucks with mirrors. Others stood lonely guard duty at cold, muddy fire bases with few comforts.

Wheeler and Sgt. Javier Ramos-Garcia, 27 of Dorado, Puerto Rico, worked in the comfort of indoors. Ramos-Garcia serves in the division&#8217;s personnel office. Part of his job was handling the affairs of soldiers who died.

As the Army geared up to invade Iraq, the soldiers learned most of them would have to stay 2&#189; months beyond their scheduled May return. The 1st Cavalry Division, slated to replace them, would head to Iraq instead. Eventually the 28th Infantry Division, a Pennsylvania National Guard unit, was assigned to take their place.

Many soldiers got a two-week rest-and-relaxation break. Wheeler used hers to fly home to Vermont and get married. With only three weeks&#8217; notice, she learned that she and her fianc&#233;, Spc. David Wheeler &#8212; who had deployed with other 1st ID troops to Turkey &#8212; could both get leave at the same time.

In late July, the soldiers finally flew home in small groups to a low-key welcome. They arrived just as Gen. John Keane, the Army&#8217;s acting chief of staff, announced that 1st ID would deploy to Iraq next spring for one year.

After a couple of weeks of decompression, the Big Red One will start training later this month for its turn in Iraq. To these soldiers, that deployment seems blessedly far in the future.