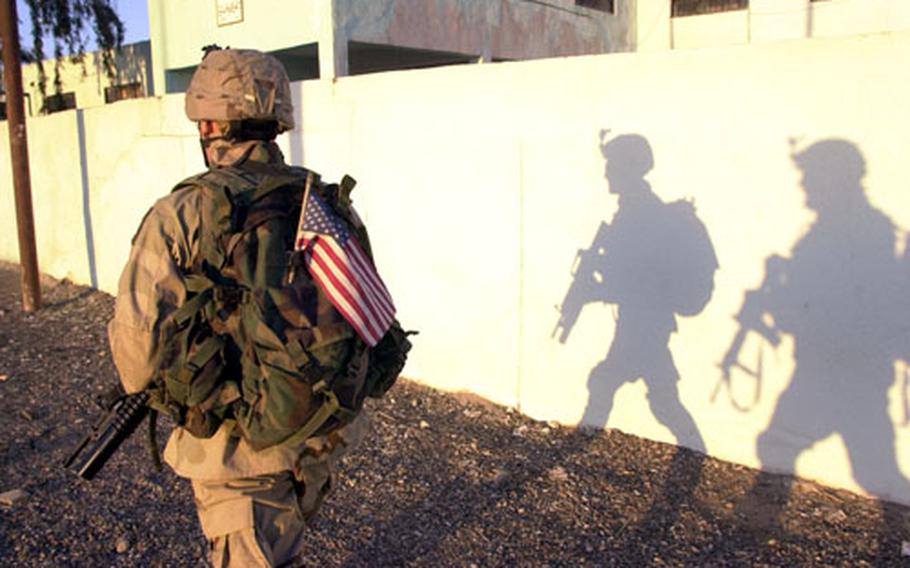 Spc. Javier Aguilar and another scout cast big shadows as they pass through Ad-Dawr, Iraq, in the late afternoon. Soldiers from the 1st Infantry Division do everything from helping bolster the fledgling Iraqi Army to counterinsurgency missions. (Terry Boyd / S&S)

Spc. Javier Aguilar and another scout cast big shadows as they pass through Ad-Dawr, Iraq, in the late afternoon. Soldiers from the 1st Infantry Division do everything from helping bolster the fledgling Iraqi Army to counterinsurgency missions. (Terry Boyd / S&S) 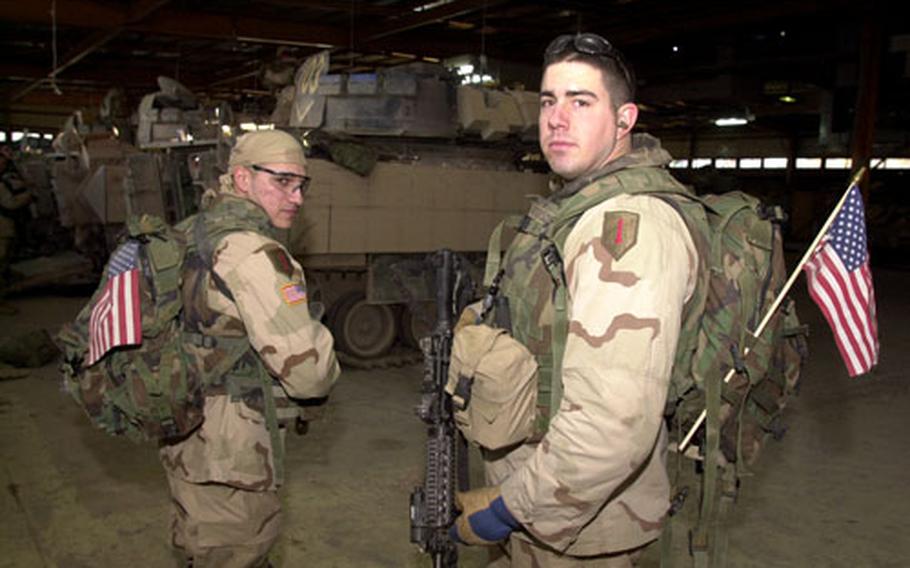 Spc. Justin Patterson, left, and Spc. Javier Aguilar prepare to get in the Bradley fighting vehicles that will take them to Ad-Dawr. (Terry Boyd / S&S) Sgt. Michael Robin has a shadow as he takes a global positioning system reading in Ad-Dawr. The prime directive for American soldiers in this area is to help the new Iraqi army become a more effective, reliable presence on the way to replacing coalition forces. (Terry Boyd / S&S)

FORWARD OPERATING BASE WILSON, Iraq &#8212; In a relatively large force of 14 soldiers, a joint 1st Infantry Division/Iraqi army patrol flows through town with the relentlessness of Jehovah&#8217;s Witnesses working a virgin neighborhood.

House by house, block by block, neighborhood by neighborhood, they cover mile after mile of Ad-Dawr, a Sunni Triangle town of 12,000 people.

Just when residents are sure the patrols have passed, there&#8217;s a knock at the door. Soldiers seem to be everywhere after Bradley fighting vehicles drop scouts from Troop C, 1st Squadron, 4th Cavalry Regiment for a sunset rendezvous with Iraqi counterparts.

For Veach and his scouts, Thursday night is one of their last after 12 months, hundreds of missions, big victories and bad days including three attacks in the past week.

Not so long ago, Ad-Dawr was ignored because it was quiet, 1st ID officers say. But when an October offensive drove the insurgents out of Samarra, they regrouped in Ad-Dawr.

A night engaging the enemy is atypical for scouts, who are more likely to pull surveillance in vulnerable Iraqi army positions or search for insurgents firing rockets.

A night on the town offers the chance for what soldiers term &#8220;movement to contact,&#8221; which means luring the enemy to an unfair fight.

Lately, insurgents have reminded the scouts that despite their best efforts, this is still their town.

On Tuesday, a grenade went off a few feet from Spc. Javier Aguilar, spraying him with shrapnel. A few days before that, a makeshift bomb knocked out Staff Sgt. Reginald Graham, a Bradley commander, as he ferried a squad of scouts to Ad-Dawr.

Both soldiers recovered quickly. On Thursday, Aguilar was back but subdued.

Doing this night after night takes fortitude: Insurgents always have the initiative, setting bombs, or shooting, then disappearing into alleys.

Thursday night is &#8212; all things considered &#8212; a pretty good night in a bad place. Still, the new guys are inheriting an angry populace loyal to their deposed benefactor, Saddam Hussein.

&#8220;People down here really, really despise us,&#8221; Veach says early in the evening. Ad-Dawr is home to Izzat Ibrahim Al-Douri, Saddam&#8217;s former vice president of the Revolutionary Council and current insurgent leader. Al-Douri&#8217;s mansion in a neighborhood of mega-houses remains unfinished as if he might return any minute.

Of course, nothing in Iraq is quite that simple. There are seven tribes in the area, says Sgt. 1st Class Jacob Stockdill. Every neighborhood has a different feel.

When soldiers knock, they&#8217;re usually greeted with reserved politeness. In one northside neighborhood, an older, distinguished couple seems pleased to host the soldiers, even if the soldiers say their family is suspect.

Elsewhere, men and women, young and old, walk stiffly past the patrol. Are searches intrusive? Yes, say soldiers. But they say Ad-Dawr only got worse during the months they left it alone. Soldiers try not to intimidate Iraqis, though that&#8217;s difficult when entering houses wearing battle rattle, Kevlar and carrying weapons, Robin says.

Still, he says, soldiers have to persuade Iraqis &#8220;we&#8217;re not bad guys. I try to talk as a parent, not a soldier. Try to talk as a person&#8221; who understands the fear of sending children to a school targeted by bombers.

After a dry spell, Veach and company hit a smallish-but-neat house full of evidence that someone&#8217;s been busy, perhaps making roadside bombs.

Curious electrical devices are everywhere, including a detonator cap. There are long rods that look like sparklers, used to ignite Russian rockets. Everything can be explained away, the three men inside say, until soldiers find a mujahedeen recruitment DVD.

American soldiers zip-strip the men and Iraqi soldiers take them away.

At least to a few, the Americans are the best hope for normalcy. On Tuesday, a neighborhood man tipped soldiers, who seized three suspects in the grenade attack.

So the 1st ID soldiers keep the pressure on Ad-Dawr as time runs out. They&#8217;ll keep pushing until the last patrol, but that last patrol is on their minds.

After the soldiers are back into the personnel carriers, and the Bradleys are reaching cruising speed, Veach raises his hand and flashes four fingers at his comrades.