1st ID sets up new base near Iraqi border 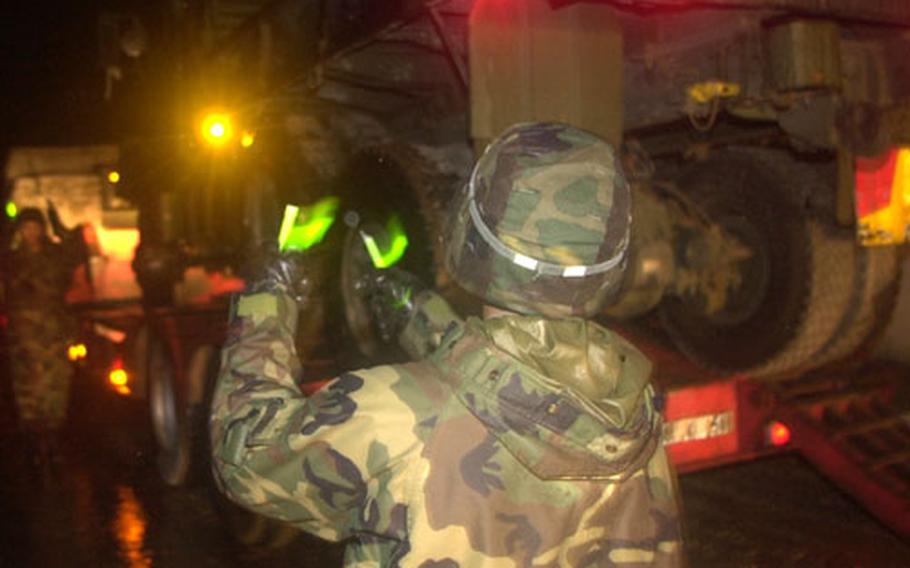 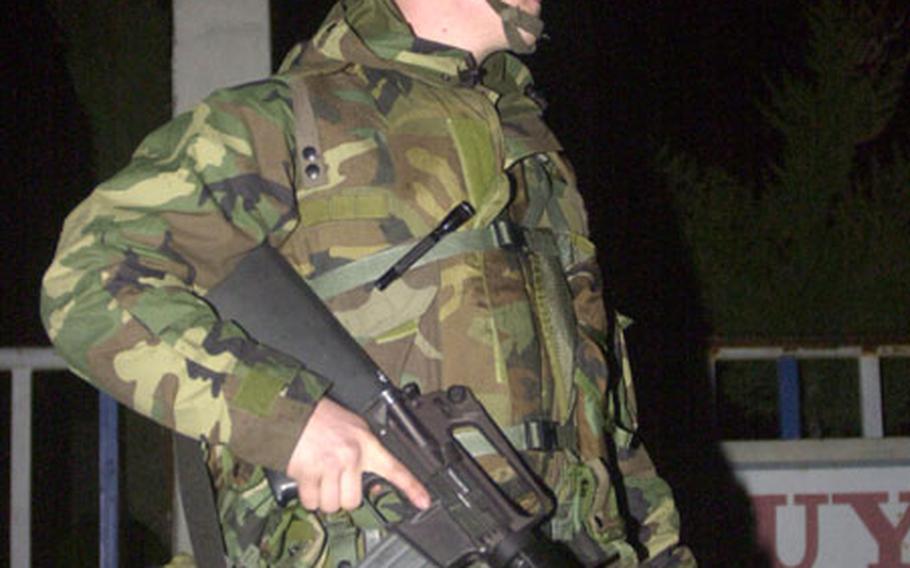 Spc. Ryan Baker stands guard as the first major contingent of U.S. troops and gear unloads at a new forward logistics base in eastern Turkey early Friday morning. Despite continuing uncertainty on whether Turkish leaders will approve a front combat force to pass through the country into northern Iraq, a 1st Infantry Division-led logistics task force is continuing preparations. (Jon R. Anderson / S&S) A pair of U.S. soldiers stand guard behind coils of razor-wire Friday afternoon at a new U.S. military forward operating base about 100 miles from Turkey&#39;s border with Iraq. (Jon R. Anderson / S&S)

On the outskirts of the ancient mountaintop city of Mardin, the new outpost is near a small civilian airport and sits just off the main road leading to Turkey&#8217;s frontier with Iraq.

The compound once served as a grain refinery and warehouse complex, according to local residents.

Rain-soaked soldiers worked into the pre-dawn hours Friday, unloading dozens of Humvees, trucks, fuel haulers and other hardware after a grueling 15-hour convoy from southern Turkey&#8217;s port city of Iskenderun.

Officials say the new base will serve as a logistics hub for tens of thousands of U.S. combat troops, if Turkish leaders approve an American invasion force.

&#8220;It&#8217;s a command and control node for the flow of site preparation equipment and other potential forces,&#8221; said Navy Cmdr. Ike Skelton, spokesman for the U.S. buildup in Turkey.

Soldiers wearing the Army&#8217;s medical command patch and the Germany-based 21st Theater Support Command patch could also be seen working around the compound.

Establishment of the new base comes amid continuing uncertainty over U.S. plans to use Turkey as a springboard for an invasion into northern Iraq.

While Turkish lawmakers approved 3,500 U.S. troops to begin laying the groundwork for that more than month ago, the parliament failed to pass a motion last week to give the green light a 62,000-stong invasion force.

Urged on by the top general of the Turkish military on Wednesday, government leaders have hinted they may push for another vote soon.

Key elections are slated for Sunday, which will likely see a new prime minister installed, so it&#8217;s uncertain when that vote may happen. Some reports predict days, other reports say weeks.

Troops have waited for more than two weeks to move out of staging areas, while military gear has piled up along Iskenderun&#8217;s docks.

Instead of grinding to a halt, however, the cogs of site preparation have quickened in recent days.

Within hours of the 1st ID convoy pushing east out of Iskenderun to set up the new outpost, a fourth cargo ship brimming with more logistics gear began unloading along the port&#8217;s freshly cleared marshalling areas.

&#8220;This is a damn sight better than being cooped up, that&#8217;s for sure,&#8221; said the soldier, guiding a Humvee through the rain off a flatbed trailer with green chemical lights known as glow sticks.

Inside, a command post has been set up, with more troops checking ID badges.

Just down the muddy, potholed road, American civilians wearing Brown & Root baseball caps were seen overseeing improvements at other facilities in the area, including a fuel station. Brown & Root is well-known among troops serving in Kosovo and Bosnia for playing an important role in setting up and running military camps.