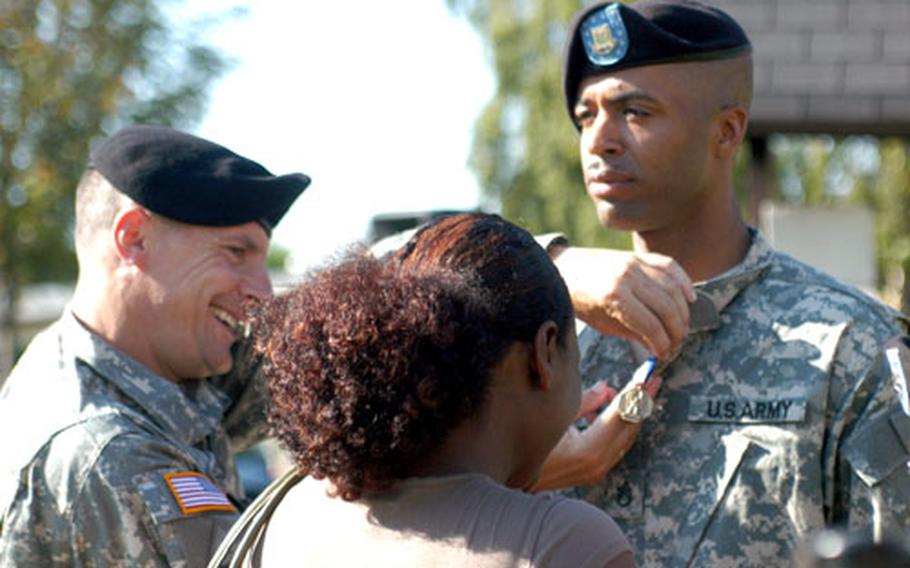 FRIEDBERG, Germany &#8212; First came the bright flash, then the ball of flame, then a man named War burst onto the scene to chase down a burning tank and pull two soldiers from its smoking hull.

But White and Morados weren&#8217;t just &#8220;anybody&#8221; to Mobley, who was 31 years old at the time. He knew the two teenagers well, and had spoken to White shortly before White drove his M1A2 tank onto the Brookhaven Range for the gunnery exercise.

On Wednesday, both White and Morados were on Mobley&#8217;s mind as he accepted the Soldier&#8217;s Medal at a ceremony on Ray Barracks in Friedberg. The ribbon was awarded at the start of a promotion ceremony for 1st Battalion, 37th Armored Regiment soldiers.

At the time of the accident, Mobley was assigned to the 3rd Battalion, 67th Armored Regiment, 4th Infantry Division (Mechanized).

&#8220;The performance must have involved personal hazard or danger and the voluntary risk of life under conditions not involving conflict with an armed enemy,&#8221; the section states.

Mobley was observing the exercise when White&#8217;s tank caught fire because of a malfunction with its nuclear, biological and chemical weapons system, an Army spokesman said. He ran from a reviewing platform to a vehicle and, with others aboard, chased down the tank, which eventually crashed into a tree. The soldier then climbed into the smoke-laden tank twice to retrieve White and Morados. Two others in the crew managed to jump clear of the tank as it rolled along unguided.

A veteran of the 1991 Persian Gulf War, Mobley is humbled by the award, saying he often thinks of where White and Morados would be in their careers had they lived.