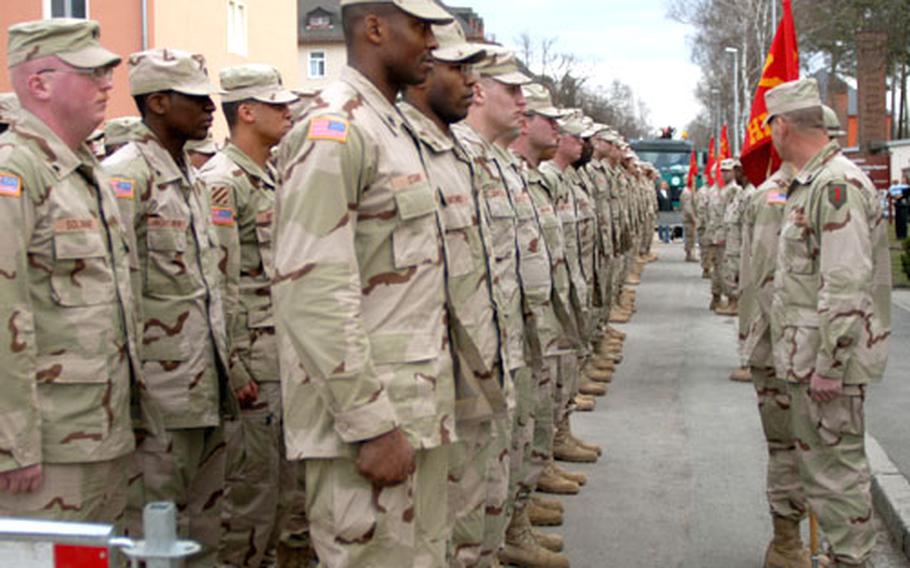 Soldiers from 1st Battalion, 33rd Field Artillery Regiment stand in formation Feb. 5 at a ceremony to case the battalion colors before deploying to Iraq. The unit deployed Tuesday and was expected to arrive in Kuwait on Wednesday. (Rick Emert / S&S)

BAMBERG, Germany &#8212; The 1st Battalion, 33rd Field Artillery Regiment deployed Tuesday to Iraq, becoming one of the first units within the 1st Infantry Division to fully deploy to Iraq.

About 500 soldiers from the unit deployed in support of the second rotation of Operation Iraqi Freedom.

During a color-casing ceremony last week, Lt. Col. Ken Boehme said the battalion was ready for the deployment.

The confidence also came from a lot of training, he said after the ceremony.

The unit was expected to fly to Kuwait on Wednesday. Upon arrival in Iraq, it will conduct Reception, Staging, Onward movement and Integration, or RSOI, operations with the units it will replace, Boehme said.

He said the unit should be fully prepared to take over its future missions by mid-March.

Command Sgt. Maj. Francisco Aponte said he supervised all of the training for his battalion.

&#8220;Based on how seriously they trained, and by talking to the soldiers, I have no doubt that 99.9 percent of the soldiers are ready to deploy,&#8221; Aponte said after the Feb. 5 ceremony.

However, some soldiers did have to remain behind &#8212; but not because they were unprepared.

Pvt. Matthew Wixon was held from the deployment because of an injury. He expects to join his fellow soldiers in about a month. He said it will be a long wait.