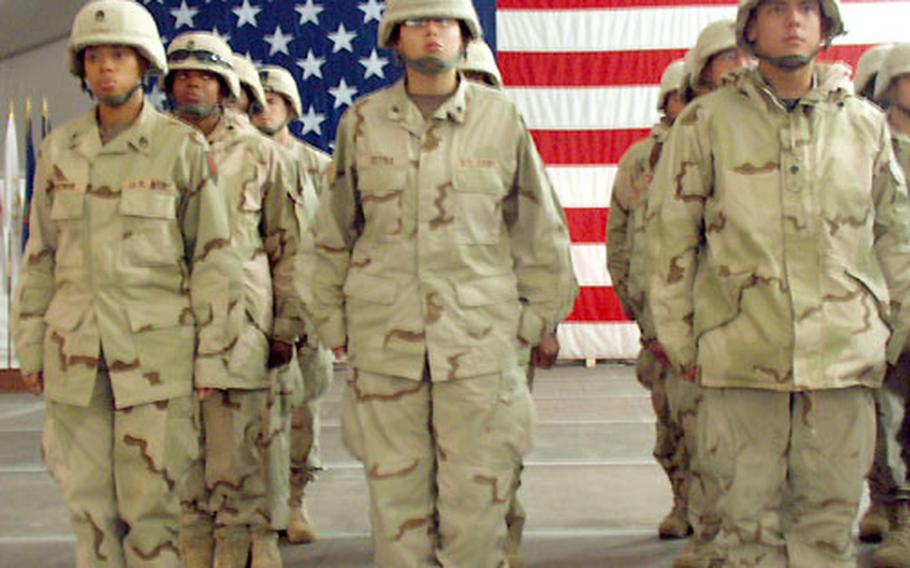 Soldiers from the 1st Infantry Division’s Division Support Command stand at attention, moments before their reunion with families at Harvey Barracks in Kitzingen, Germany. Fifty-three members of the unit returned home with the division’s advance party Saturday after serving 10 months in Iraq. (Steve Liewer / S&S)

Soldiers from the 1st Infantry Division’s Division Support Command stand at attention, moments before their reunion with families at Harvey Barracks in Kitzingen, Germany. Fifty-three members of the unit returned home with the division’s advance party Saturday after serving 10 months in Iraq. (Steve Liewer / S&S) 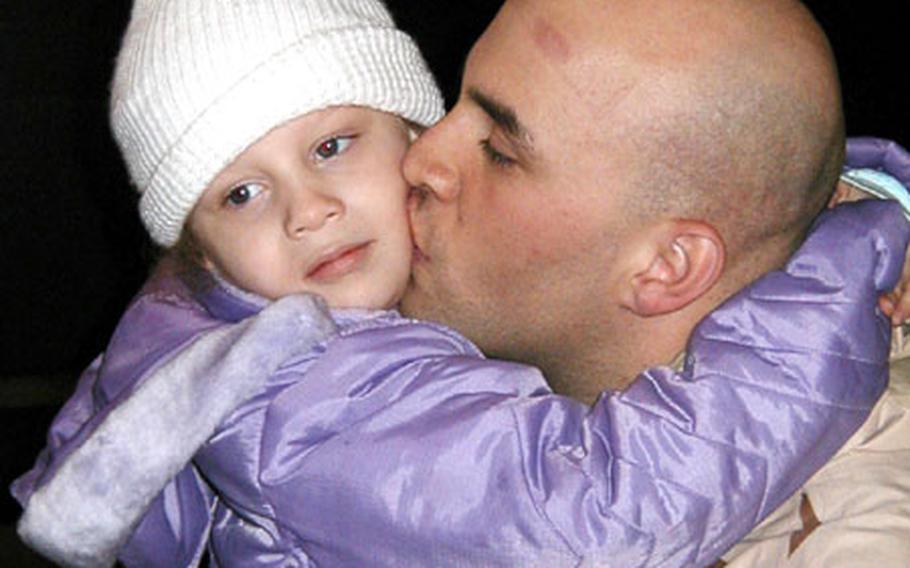 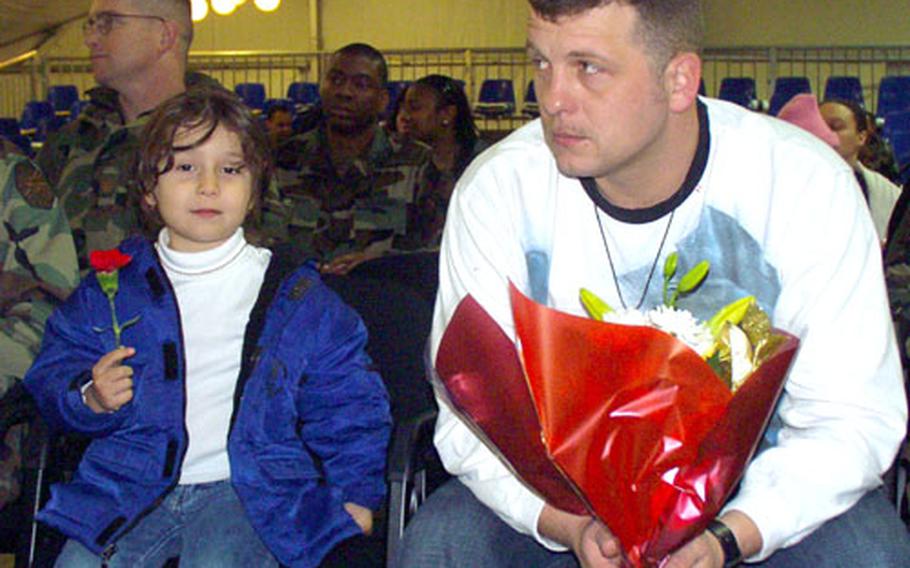 KITZINGEN, Germany &#8212; Monica Lavarrkkaetti got the best fifth birthday present a little girl could ask for.

For a half-hour before sunrise, she sat quietly next to her mother, Melissa, and her 2-year-old sister, Maria, holding a birthday card tightly to her jacket.

Then a curtain opened, revealing 53 soldiers from the 1st Infantry Division&#8217;s Division Support Command, or DISCOM, standing at attention under the roof of the &#8220;reintegration tent&#8221; at Kitzingen&#8217;s Harvey Barracks.

After some patriotic music and one short speech, the soldiers and their families &#8212; separated by war for 10 months &#8212; ran together. Monica&#8217;s daddy, Sgt. Vishnutivanan Lavarrkkaetti, scooped her up and kissed her, again and again.

The Lavarrkkaettis were among dozens of families reunited Saturday as the first three planeloads of 1st ID soldiers arrived home in Germany after 10 months of duty in Iraq.

The 154-member advance party included mostly cooks, truck drivers, armorers and motor pool specialists who are needed to help prepare the way for main body of troops that will follow them in February and March, said Spc. Rebecca Sharpton, a spokeswoman for the division&#8217;s W&#252;rzburg-based rear detachment.

At least a few soldiers returned to most of the 1st ID&#8217;s bases, Sharpton said. But the largest returning contingents included 52 from four units in Katterbach, 30 in Schweinfurt and 53 DISCOM troops in Kitzingen.

The soldiers had endured an all-night journey: more than six hours on a military cargo jet from Iraq, then five hours of collecting baggage, riding buses and turning in gear after arriving in Germany.

But the final day of waiting paled compared with the seemingly endless months of separation.

Most of Saturday&#8217;s returnees, though, were single soldiers whose homecomings with moms, dads and sweethearts are yet to come.

Some of the soldiers felt uncomfortable about coming home early with the advance party, which means their Iraq tours will be about two months shorter than those of their peers.