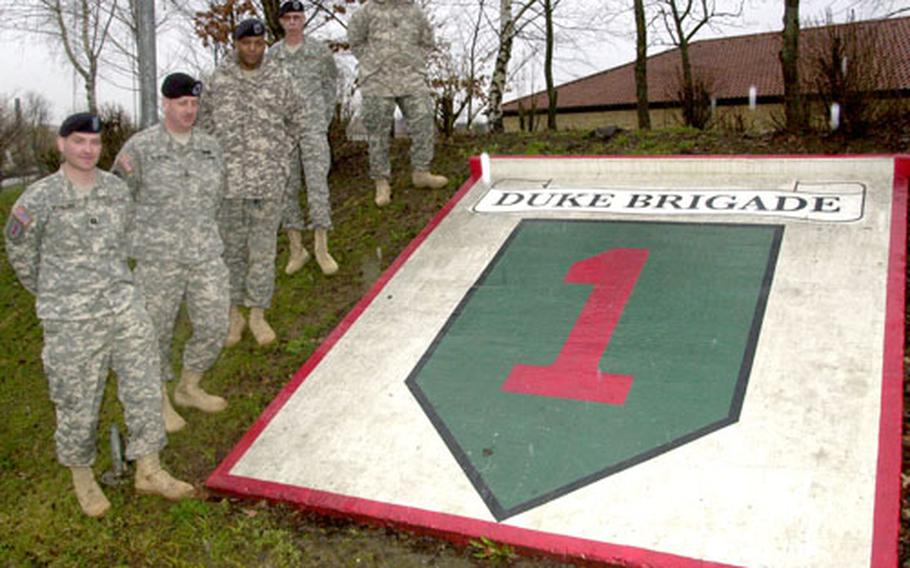 Only about 300 1st ID soldiers are left at Vilseck. Most of their comrades have moved to other units as 3rd Brigade prepares to inactivate May 3 so it can reactivate with new soldiers in the U.S., Capt. Dan Woodlock, 32, said Monday.

When the new soldiers arrive on buses from the airport, another sponsorship team member, Master Sgt. Thomas MacIntyre, 44, of Windsor, Vt., will be there to meet them.

On their first day in Vilseck, incoming troops will be issued ration cards and transported to their new homes. U.S. Army Garrison Grafenw&#246;hr has already assigned 2nd Cav soldiers and their families to houses and barracks, something that does not normally happen until a unit is in the country, MacIntyre said.

Because so many soldiers will arrive at once, the Chrystal Inn, Vilseck&#8217;s on-post hotel, will be at full capacity, he said.

Off-post housing in and around Vilseck is some of the best in Europe, added MacIntyre, whose family lives in nearby Kaltenbrunn in a three-bedroom duplex.

Another sponsorship team member, Staff Sgt. Robert Laury, 32, of Jackson, Miss., said barracks for single soldiers at Vilseck meet the Army standard but they are nothing special.

However, Laury, who is on his third tour to Germany and first came to Vilseck six years ago, said the base is one of the most modern in Europe and that 2nd Cavalry soldiers should enjoy the local culture.

&#8220;You get to see different cultures here wherever you go. You don&#8217;t get that chance in the States. You are limited to McDonald&#8217;s down the street and shopping malls,&#8221; said Laury, who also praised the closeness of the Vilseck community.

Another sponsorship team member, Sgt. 1st Class Dennis Hamer, 43, of Chicago, is in an unaccompanied baggage detail that will work with German delivery companies to make sure soldiers&#8217; things are in their houses when they arrive. The baggage has left Fort Lewis but has yet to arrive at Vilseck, he said.

After the first-day reception, sponsors will guide the new troops through various classes including the Head Start program to acquaint them with German culture and language, Woodlock said.

The 2nd Cavalry soldiers will want to know about things to do in their new community, to include bars and sporting opportunities, Hamer said. Woodlock recommended that new troops check out the many ski areas in Bavaria and nearby Austria. The large city of Nuremberg, about an hour&#8217;s drive away, and the smaller Regensberg, are also good places to socialize, he said.