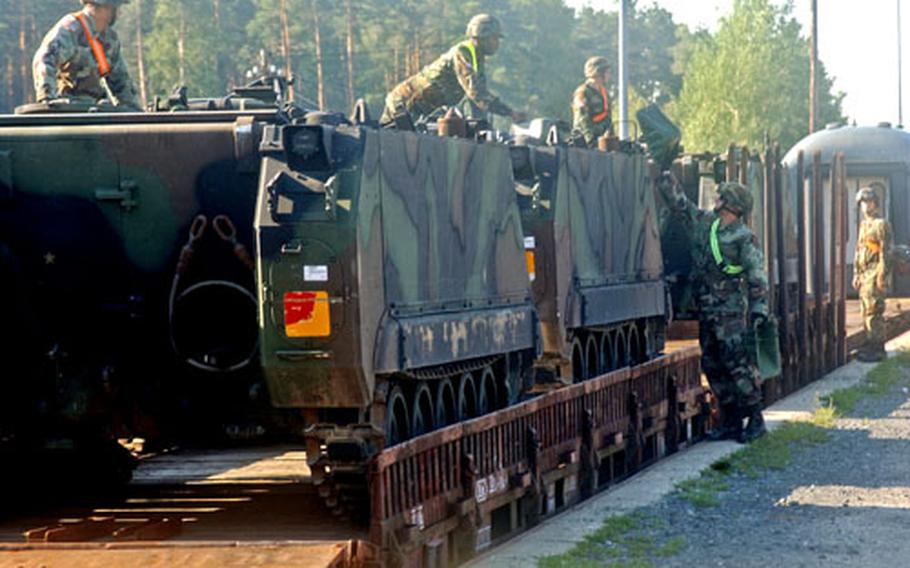 Soldiers from the 1st Infantry Division’s 3rd Brigade loaded 20 M1A1 Abrams tanks and three Bradley fighting vehicles onto rail cars Wednesday at Rose Barracks in Vilseck, Germany. The tanks were being taken to the Army Material Command and will be used later in the war on terror. The Army confirmed Monday that the 3rd Brigade is being downsized in Vilseck to make room for a Stryker Brigade Combat Team. (Joe Alger / U.S. Army)

Firming up another portion of the plan to transform the Army in Germany into a lighter, faster response force, the U.S. European Command Monday formally announced the 3rd BCT will have to all but disappear to make room for an as-yet unnamed Stryker brigade.

All 10 of the 3rd BCT&#8217;s units, including three company-sized elements in Bamberg, W&#252;rzburg and Kitzingen, will be drawn down over the next several months in a move that will affect approximately 2,900 soldiers and 3,990 family members, according to a EUCOM statement released Monday.

By mid-November, 370 3rd BCT soldiers will remain in the area, a U.S. Army Europe spokesman said.

The EUCOM statement, and a similar one issued by USAREUR Monday, were follow-ups to an announcement last week that the 3rd BCT is in the process of reducing its units down to &#8220;cadre&#8221; strength, creating a small unit to take care of operations in Vilseck until the Stryker troops arrive.

The new, reduced unit will be responsible for overseeing the completion of the drawdown and preparing the base for the arrival of the new brigade, acting as a &#8220;trail party,&#8221; for the outgoing troops, said Maj. Bill Coppernoll, a 1st ID spokesman.

Some units may be inactivated in the process, including the small, company-sized elements located outside of Vilseck, Coppernoll said.

Likewise, the fate of the remaining 3rd BCT detachment after the Stryker team arrives, &#8220;is a decision that still needs to be made,&#8221; he said. Some of the soldiers could be incorporated into the Stryker brigade, be reassigned within the division or sign off as the last active members of the brigade.

In the meantime, the unit is already well into the process of slimming itself down, allowing soldiers to transition out of the brigade without replacing them, and evaluating troops for possible reassignments in Europe or the States, said USAREUR spokesman Bruce Anderson.

The natural attrition began when the unit returned from Iraq in the spring.

The Stryker brigade, when it does arrive, is expected to be about 1,000 troops larger than the 3rd BCT, fielding about 3,900 soldiers, the EUCOM statement says.

Meanwhile, during the lull in population created by the reduction of the 3rd BCT, officials also plan to reassess the base support structure at the post.

&#8220;We will evaluate the requirements for garrison support as it becomes clearer what support is needed between the departure of the 3rd Brigade Combat Team and the arrival of the Stryker Brigade, and may make appropriate adjustments that would affect garrison personnel,&#8221; EUCOM&#8217;s release reads.

That statement, however, shouldn&#8217;t be considered a warning to base employees at Vilseck, said Kathy Gibbs, 100th Area Support Group spokeswoman.

As part of its drawdown, the following units of the 3rd Brigade Combat Team are being reduced by undetermined amounts: