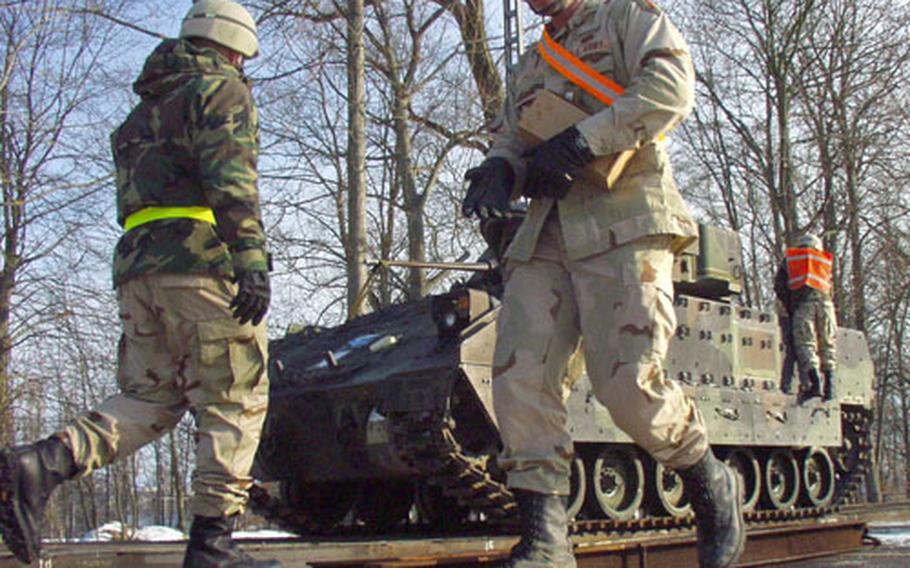 Soldiers from the 1st Infantry Division&#39;s 1st Battalion, 26th Infantry load tracked vehicles aboard railroad flatcars Friday at Conn Barracks in Schweinfurt, Germany. The division is shipping about 7,000 vehicles to Iraq for use by its 12,000 soldiers in Operation Iraqi Freedom during the coming year. (Steve Liewer / S&S)

Soldiers from the 1st Infantry Division&#39;s 1st Battalion, 26th Infantry load tracked vehicles aboard railroad flatcars Friday at Conn Barracks in Schweinfurt, Germany. The division is shipping about 7,000 vehicles to Iraq for use by its 12,000 soldiers in Operation Iraqi Freedom during the coming year. (Steve Liewer / S&S) 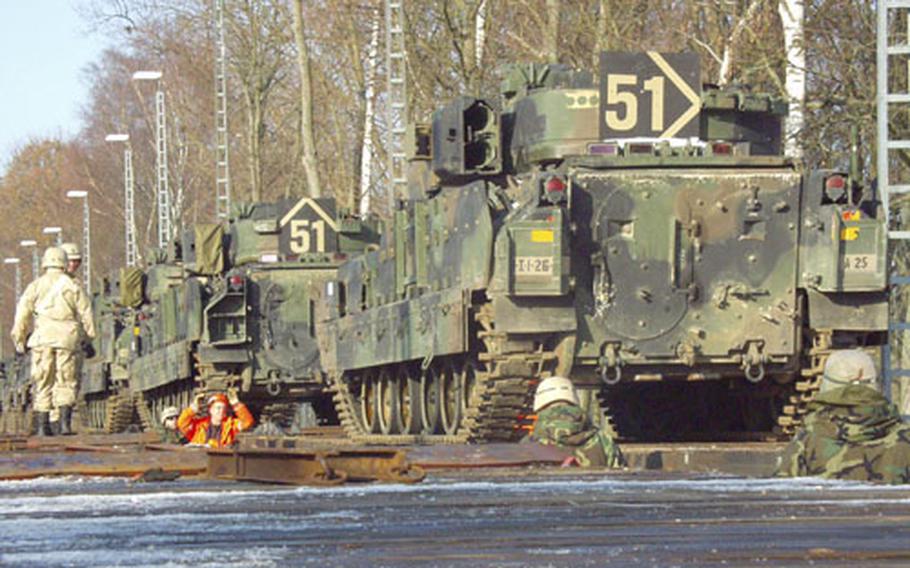 Lines of tracked vehicles fill railcars Friday at Conn Barracks in Schweinfurt, Germany, last week for shipment to Kuwait. The 1st Infantry Division&#39;s 1st Battalion, 26th Infantry, based in Schweinfurt, will join the 12,000-strong Big Red One next month in Iraq, part of one of the largest rotations of troops in history. (Steve Liewer / S&S)

SCHWEINFURT, Germany &#8212; A year ago, Spc. Thomas Minuto and the rest of the 1st Battalion, 26th Infantry Regiment rolled their Abrams tanks and Bradley fighting vehicles across the frozen ground onto flatbed train cars at Schweinfurt&#8217;s Conn Barracks, ready to head for the Middle East and bring freedom to the people of Iraq.

Minuto and his buddies were back at the railhead Friday, ready to try again. Last year, politics kept the 1-26 Infantry and the rest of the 1st Infantry Division from joining the invasion of Iraq when the Turkish Parliament blocked the Big Red One from landing there.

This year, there is little doubt Minuto will land in Iraq. Some 12,000 troops from the W&#252;rzburg-based 1st ID have begun shipping vehicles and gear to the Middle East where, during the next two months, the unit will relieve the 4th Infantry Division in patrolling the dangerous area north of Baghdad.

On Friday, 1st ID officials invited German and American news media to watch as soldiers from the 1-26 Infantry loaded their heavy vehicles aboard trains. Maj. Deb Stewart, a division spokeswoman, said these and other vehicles shipped by barge or truck, will arrive at the port in Antwerp, Belgium, this week for shipment to Kuwait.

All together, the division will ship about 7,000 vehicles to the Middle East. About 1,300 are Humvees, Stewart said, 50 of them armored for protection against the roadside bombs and rocket-propelled grenades that have killed dozens of soldiers in Iraq since the U.S. invasion began March 20.

But, she said, another 600 armored Humvees currently en route from the United States will be waiting for division troops when they arrive in Kuwait next month. More are expected to be shipped during the 1st ID&#8217;s scheduled one-year deployment.

The division&#8217;s troops will fly to Kuwait from Germany in about 50 planeloads over the coming month as part of one of the biggest shifts of manpower in military history. By May 1, 108,000 new troops will fly to Iraq to take the place of about 143,000 currently deployed there.

Stewart said 1st ID troops will unload their equipment in Kuwait while living in tent cities. Then they will go through about 7-10 days of training, including live-fire convoy drills for every soldier.

Then they will convoy north to their bases. Although for security reasons the division won&#8217;t reveal exactly where individual units will be deployed, spokesmen have said it will patrol roughly the same area as the 4th ID has for the past year. The 4th ID headquarters has been at the palace complex in former Iraqi leader Saddam Hussein&#8217;s hometown of Tikrit, and its other forces have been based in Samarra, Balad and Baqubah.

The area includes most of the &#8220;Sunni Triangle,&#8221; an area of heavy guerrilla activity since President Bush declared the end of major combat operations May 1. According to the Web site of the 4th Infantry Division Association, 41 4th ID soldiers have been killed in Iraq, 27 of them from hostile actions. But U.S. Central Command has noted a sharp drop in guerrilla attacks since Saddam was captured near Tikrit Dec. 13.

The risk doesn&#8217;t faze the soldiers of the 1-26 Infantry, said Sgt. Dennis Stanley, 31, of Avila Beach, Calif. He served in the Army from 1991-2000 and rejoined last fall because he missed military life and wanted to aid in the war on terrorism. His wife, Sgt. Cindy Stanley-Segovia, just returned from six months in Iraq.