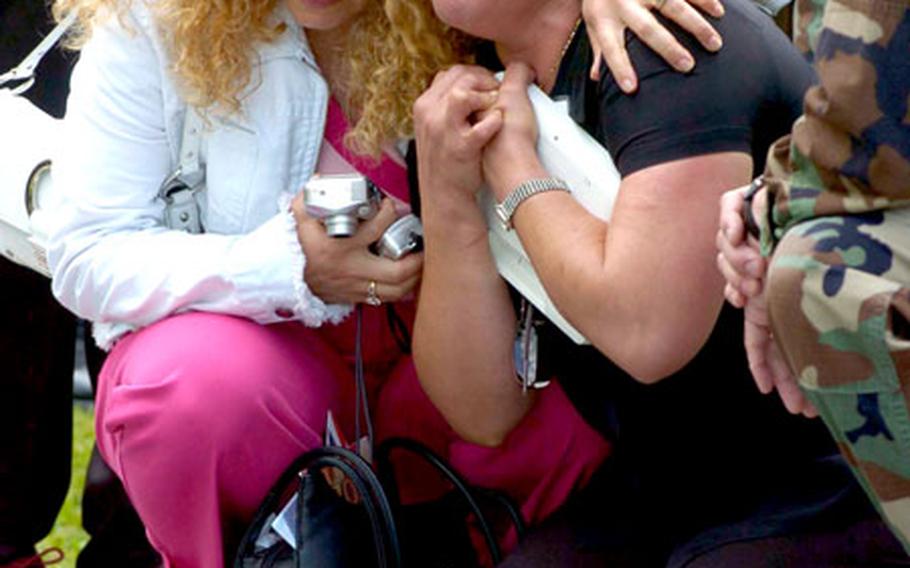 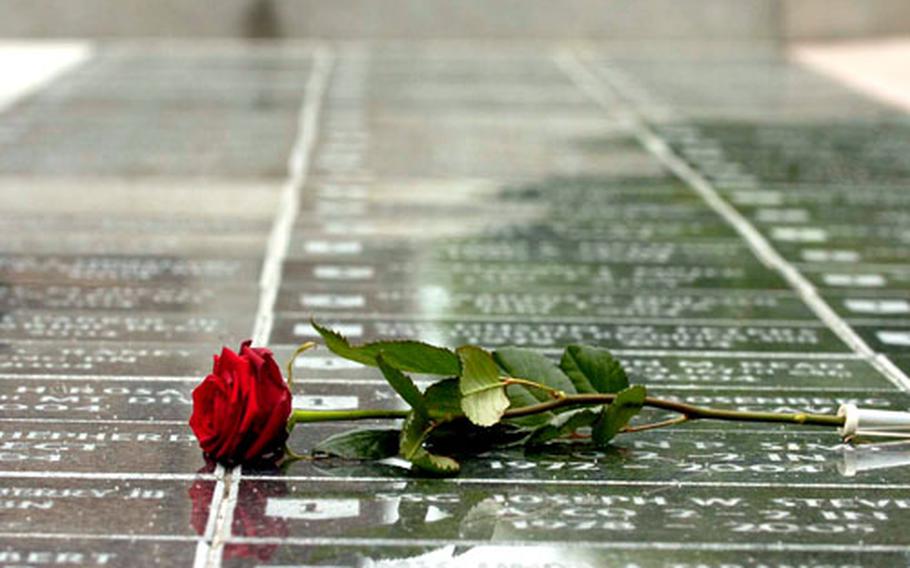 A lone red rose rests on plaques bearing the names of 193 soldiers killed in Iraq since 2003. (Raymond T. Conway / S&S)

The boy they remembered reveled in messiness like the cartoon ogre. He loved to get his hands greasy working on his car or rolling around in the mud playing football.

Nearly five years before Carlson, 22, of the 2nd Battalion, 2nd Infantry Regiment died Jan. 24 with four of his platoon mates in the back of a Bradley fighting vehicle that rolled over in an Iraqi canal, he wrote a senior-year essay about his hopes for the future. His brother, Daniel Carlson Jr., ran across it last year while cleaning house and thought it would make a fitting tribute if the worst should ever happen.

Maj. Gen. John Batiste, commander of the 1st Infantry Division, dedicated a monument in memory of the soldiers from the Big Red One and its attached units who have died since 2003 in Iraq. Carlson&#8217;s name is one of 193 etched in bronze on the statue&#8217;s base, and in a stone walkway that lies before it.

The 1st ID soldiers and supporters raised $60,000 to build the memorial in Victory Park, outside division headquarters in W&#252;rzburg.

More than 500 soldiers attended the ceremony. Chaplains read the names of every soldier who died.

Family members of 26 fallen soldiers watched the service, some wiping away tears. For many, it was the first time meeting the men and women who served with their loved ones. Several said they would not have missed the chance.

Not that it was easy. After the ceremony, Leslie Garza-Mu&#241;oz knelt down and wailed in pain as she held a photo of her only son, Sgt. Javier Marin of the 2-2 Infantry, who died in the same accident that took Carlson&#8217;s life.

She touched his name on the memorial stone, shouting &#8220;My baby! My son!&#8221; in her native Spanish. The sight and sound of her grief moved others to tears.

In his speech, Batiste thanked the families and asked God to comfort them. He promised that their soldiers&#8217; sacrifice wouldn&#8217;t be forgotten.

&#8220;We honor them on behalf of all the spouses who lost a partner in life, parents who have lost a son or daughter, and all the children who will grow up without a parent,&#8221; he said.