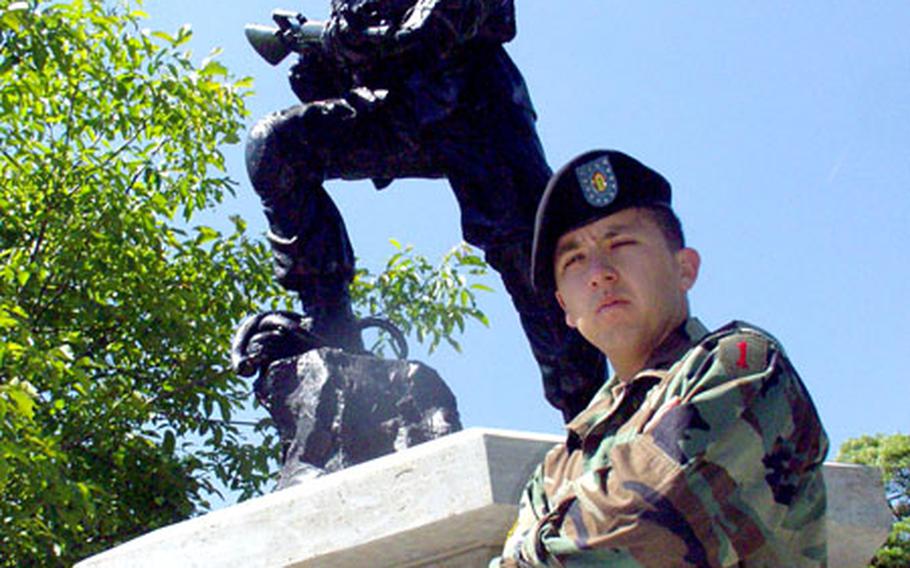 Cpl. Jared Luera of the 1st Infantry Division headquarters staff spearheaded the $60,000 fund-raising drive for the fallen soldiers monument, which is to be dedicated Monday in Würzburg, Germany. It is in memory of the 193 soldiers from the 1st ID and its attached units who died during Operation Iraqi Freedom. (Steve Liewer / S&S)

Cpl. Jared Luera of the 1st Infantry Division headquarters staff spearheaded the $60,000 fund-raising drive for the fallen soldiers monument, which is to be dedicated Monday in Würzburg, Germany. It is in memory of the 193 soldiers from the 1st ID and its attached units who died during Operation Iraqi Freedom. (Steve Liewer / S&S) 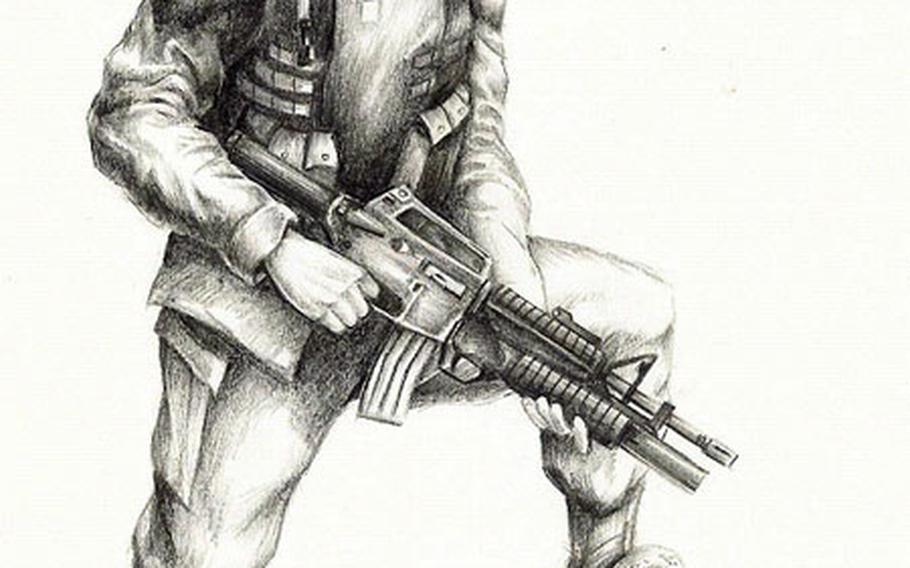 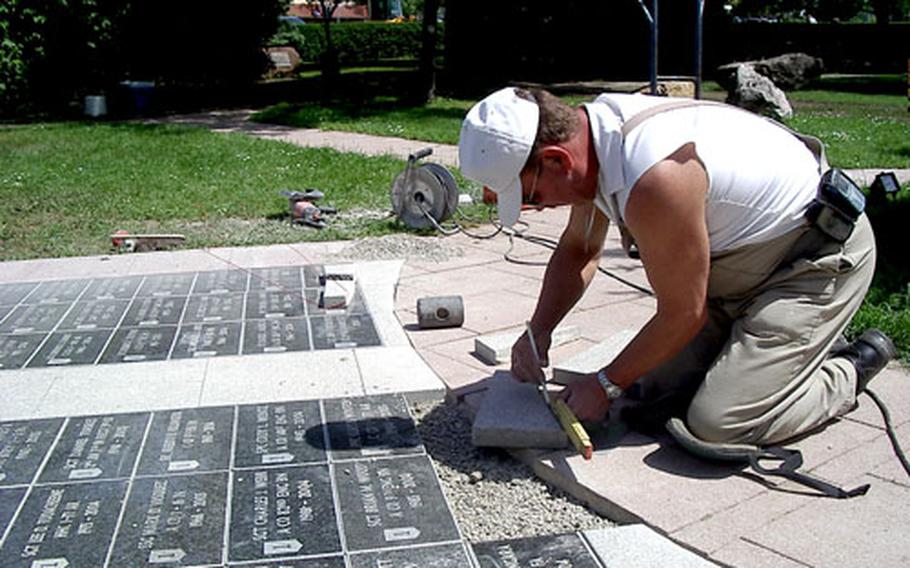 Otto von Hausen, a German base support battalion worker, puts the finishing touches on a sidewalk of memorial stones at the foot of the fallen soldiers monument. (U.S. Army photo)

W&#252;RZBURG, Germany &#8212; On the 61st anniversary of the day their forebears stormed ashore at Omaha Beach in Normandy, 1st Infantry Division soldiers will dedicate a memorial to the men and women who died in Iraq under the banner of the Big Red One.

A ceremony is planned for 1 p.m. Monday at Victory Park, just outside the division&#8217;s headquarters on Leighton Barracks.

During the event, soldiers also will extinguish the lights on the Victory Tree, an evergreen lit with white lights before the division deployed to Iraq early last year. And the division will officially open the new Operation Iraqi Freedom wing of the 1st Infantry Division Museum.

An Iraqi sculptor cast the &#8220;fallen soldiers&#8221; monument from the bronze base of statues that once stood at the entrance to former Iraqi dictator Saddam Hussein&#8217;s Tikrit palace complex. The 1st ID used the complex for its headquarters during a 13-month deployment that ended in March.

Leading up to the sculpture is a sidewalk of marble stones, each bearing the name of one of the 193 soldiers from Big Red One or its attached units killed in Iraq. Family members of at least 25 of those soldiers are expected to attend the dedication.

Cpl. Jared Luera, who serves on the staff of division commander Maj. Gen. John Batiste, led an eight-month fund-raising drive among soldiers from the 1st ID plus attached units from the 25th Infantry Division and several National Guard and Reserve units to gather money for the statue.

The drive netted $60,000, Luera said, enough to pay for the statute and its base. Because of Pentagon regulations, military funds couldn&#8217;t be used for the memorial.

Luera said the drive started in October and raised $42,000 by the time his company returned to Germany in late February. It was much more than the $18,000 needed to pay the sculptor.

Then he learned the base and bronze plaques would cost about $40,000, far more than expected. A last-minute flurry of fund raising in Germany netted the extra.

The sculpture almost didn&#8217;t make it to Germany, said Maj. Michael Ragan, who coordinated the project. The sculptor promised to deliver it by Jan. 5, well before 1st ID troops started leaving, but didn&#8217;t come through until mid-March, one day before the last flight returned to Germany.

How long the monument will remain in Germany is not yet clear. The Pentagon has announced plans to move the 1st ID to Fort Riley, Kan., but has offered no timetable. When that happens, the memorial &#8212; along with all the other division monuments in Victory Park &#8212; will move, too.

One boot stands on a rattlesnake, whose dead body is coiled around a small hill. The soldier&#8217;s position, with one foot atop the hill and one foot below, ready to take the final step to the pinnacle, symbolizes the division&#8217;s partly finished mission, according to Staff Sgt. Carlos Arguello of the 106th Finance Battalion.

Arguello, who created the design for the statue, said he was inspired by a quote from President Franklin Roosevelt that also was used in a speech by 1st ID commander Maj. Gen. John Batiste: &#8220;When you see a rattlesnake poised to strike, you do not wait until he has struck before you crush him.&#8221;

He also drew inspiration from the memory of a close friend, Sgt. Victor Rosales-Lomelli, a 1st ID soldier from Vilseck killed April 13, 2004, in Baqouba, Iraq.

Arguello, a 12-year Army veteran, is an amateur artist who has never entered a design contest before, and was surprised his entry was the winner.

He said he plans to begin work later this year on a graphic design degree through an online program offered by the Art Institute of Pittsburgh.