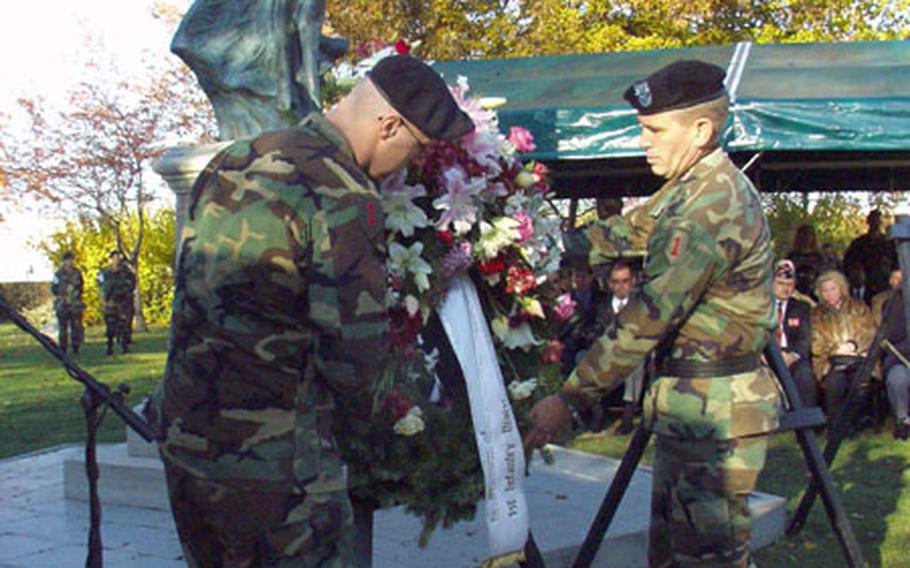 Spc. Billy Barnes (left) and Maj. Gen. John Batiste, the 1st Infantry Division commander, lay a wreath in honor of 1st ID soldiers awarded the Medal of Honor for heroism. Barnes, 26, of the 1st Battalion, 63rd Armor Regiment, earned a Purple Heart and an Army Commendation Medal with a "V" device for valor after being shot during a firefight May 18 near Al Hawija, Iraq. (Steve Liewer / S&S)

Barnes, 26, joined about 100 soldiers and veterans Thursday to dedicate stones memorializing two dozen 1st ID soldiers who had earned the Medal of Honor.

The 5&#189;-year Army veteran from Fulton, Mo., could feel a closer kinship with those &#8220;Big Red One&#8221; heroes. Nearly six months ago, Iraqi gunfire cut him down when his scout platoon from the 1st Battalion, 63rd Armor Regiment was ambushed about 25 miles west of Kirkuk.

The firefight near Al Hawija left 16 Iraqis dead, while Barnes was the only American wounded. It remains one of the biggest engagements for U.S. forces since President Bush declared an end to major combat operations May 1.

Barnes carries two colorful pieces of ribbon on his chest &#8212; for the Purple Heart and for an Army Commendation Medal with a &#8220;V&#8221; for valor &#8212; and a chunk of shrapnel just under his rib cage as reminders of the battle.

Spc. Dante Cammarata, 22, of Olympia, Wash., the medic who saved Barnes&#8217; life by dressing his wounds and huddling over him to protect him during the battle, earned a Bronze Star with a &#8220;V.&#8221; Five other soldiers and one officer also earned medals for bravery under fire.

Barnes joined the Army in 1998 and spent three years at Fort Stewart, Ga. He married his childhood sweetheart, Nicole, in November 2001 and joined his new unit in Vilseck, Germany, a month later. Only later did he learn that his wife and two stepdaughters, Haley, 8, and Sidney, 4, wouldn&#8217;t be able to join him because of custody issues involving the two girls.

The 1-63rd Armor got called up with only a week&#8217;s notice last April as a quick-reaction team in support of the Italy-based 173rd Airborne Brigade. The unit landed at Bashur Air Base in northern Iraq on April 18, then moved south to Kirkuk. The unit spent most of its first month clearing safehouses and seizing weapons.

On the night of May 18, though, his unit was charging into unknown territory. No unit had ever traveled to Al Hawija, a town that later turned out to be a hotbed of Baathist resistance.

Sometime after 10 p.m., the scout platoon stopped near a village about four miles east of Al Hawija to listen for the enemy. As they had approached towns along the way, the power would go out all at once, said Sgt. 1st Class Michael Williamson, 33, the platoon sergeant that night. Tracer rounds fired in the air signaled from one village to another.

The platoon&#8217;s seven vehicles formed into a herringbone, with Humvees staggered on each side of the road. Quickly it turned into a traffic checkpoint as an old Chevy Impala and several Toyota pickup trucks approached. All were filled with men, heavily armed with AK-47 rifles and grenades.

In a quarter-hour, the platoon had gathered 15 prisoners, bound them with plastic handcuffs and sat them among the vehicles. The headlights of an Iraqi truck gave off the only light.

Suddenly rifle fire burst from a building to the left of the road, about 500 meters from where Barnes manned a .50-caliber machine gun atop a Humvee. He squeezed off 20-30 rounds before the next burst of enemy fire.

He crawled out of the vehicle and shouted for a medic. Cammarata raced to his side and examined Barnes, turning his back to the line of fire. Moments later, Williamson joined them, laying down cover fire.

The medic stripped off Barnes&#8217; flak vest and found the wound in his side, under the thinnest part of the vest. Two other bullets had dented the chest area but didn&#8217;t penetrate. He dressed the wound, silently hoping the bullet had hit no vital organs.

With bullets hitting the pavement around them, Cammarata and Williamson managed to drag the injured soldier into a less-exposed position behind the Humvee.

Although the wound burned fiercely, Barnes stayed calm, guiding other soldiers and advising an embedded journalist accompanying the platoon to stay out of harm&#8217;s way. He thought about his wife and concentrated on staying alert.

After a few minutes, Williamson and Cammarata got Barnes to a tracked vehicle, which took him to an area where a medical evacuation helicopter could pick him up and take him to the hospital in Kirkuk.

The battle raged almost nonstop for about 45 minutes until the battalion, aided by Air Force A-10 Warthog attack aircraft, killed enemy soldiers running through the field and obliterated their hideout with a fiery boom.

Until the May 18 firefight, the soldiers of the 1-63rd Armor thought they might go home at any time. Now they knew the enemy that had abandoned Kirkuk during the war had faded dangerously into the countryside.

Williamson and Cammarata are home in Germany now. Williamson will transfer to a stateside unit later this month, and Cammarata is headed to a leadership course, now that he is eligible for promotion to sergeant.

Barnes spent almost a month at hospitals in Kirkuk, Qatar and Germany before he finally made it home to Missouri for two happy weeks with his family. He returned to duty in Vilseck and has slowly conquered weakness and pain in his left side.

He&#8217;s looking forward to a transfer to Fort Carson, Colo., in December, that will allow him finally to live with Nicole and their daughters as a family.

Still, he misses the buddies who helped him under fire and who are still in Iraq adding to the legacy of the &#8220;Big Red One.&#8221;

Medals awarded to members of 1st Battalion, 63rd Armor Regiment for actions taken while under enemy fire in a May 18 battle near Al Hawija, Iraq. The &#8220;V&#8221; designation denotes valor: