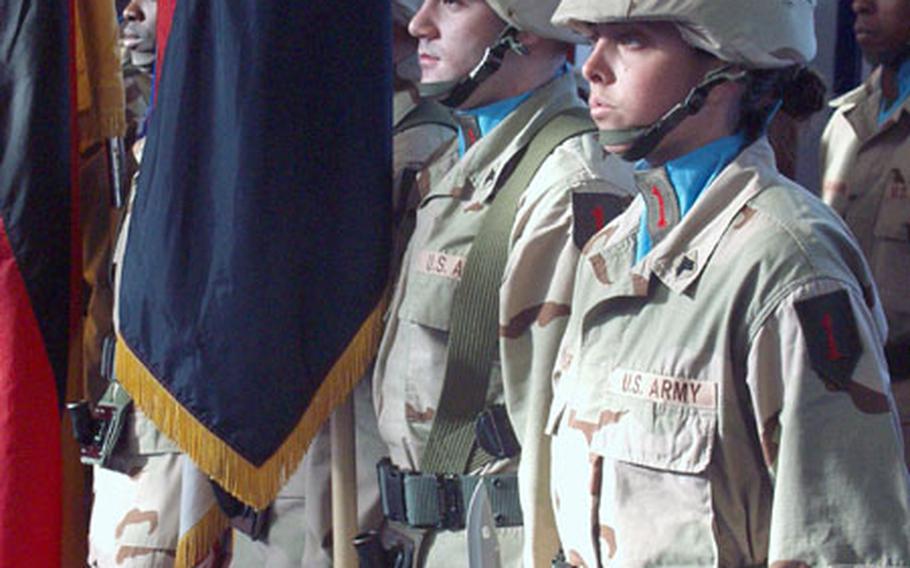 W&#252;RZBURG, Germany &#8212; With the W&#252;rzburg-based 1st Infantry Division just days from deployment to Iraq, senior German leaders bid auf wiedersehen Friday to the &#8220;Big Red One&#8221; &#8212; and urged the United States to leave the unit in southern Germany permanently once it returns home.

&#8220;Bavaria continues to rely on the protection and friendship of the United States of America,&#8221; said Bavarian Prime Minister Edmund Stoiber, speaking through a translator to about 500 Americans and Germans at Leighton Barracks. &#8220;The U.S. Army, &#8216;our&#8217; 1st Infantry Division, must remain in Bavaria. Not only will it continue to find here the best strategic and military conditions to work under, it will also continue to find here the many bonds between our peoples.&#8221;

Stoiber, who narrowly lost the German prime minister&#8217;s race in 2002 to Gerhard Schr&#246;der, led a delegation at the farewell ceremony that included three German army generals as well as many local mayors, county commissioners and members of the state parliament. He has been actively lobbying to keep American troops in Bavaria.

Coats said he spoke for President Bush in expressing gratitude on behalf of the 13 million U.S. soldiers and family members who have served tours of duty in Bavaria since the end of World War II.

&#8220;They have fond and lasting memories of the time they spent here and the friends they have made,&#8221; Coats said.

A year ago, the 1st ID packed up to join the invasion of Iraq through Turkey, but it was kept at home after the Turkish parliament refused to grant permission for U.S. troops to deploy there.

This year, its assignment is just as tough. It will be replacing the 4th Infantry Division in occupying the rebellious area northwest of Baghdad known as the &#8220;Sunni Triangle.&#8221; Its headquarters will be in Tikrit, the hometown of captured Iraqi dictator Saddam Hussein. Nearly 50 4th ID soldiers have died, most of them in guerrilla attacks on Army convoys.

Because of cold, snowy weather, 1st ID leaders moved the ceremony indoors from Victory Park. They unveiled a plaque that will be placed in the park, and flipped the switch on a tree that will remain lighted until all of the division&#8217;s soldiers return home next year.