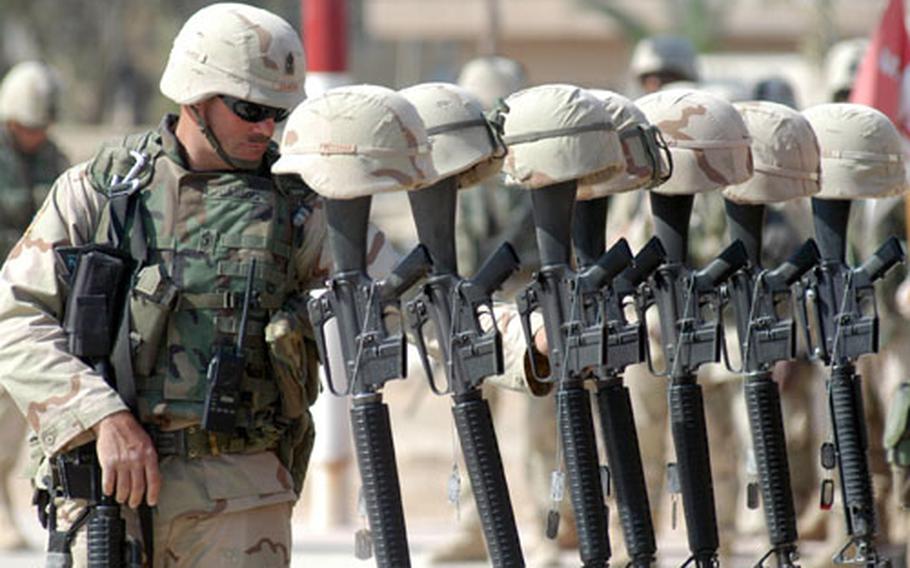 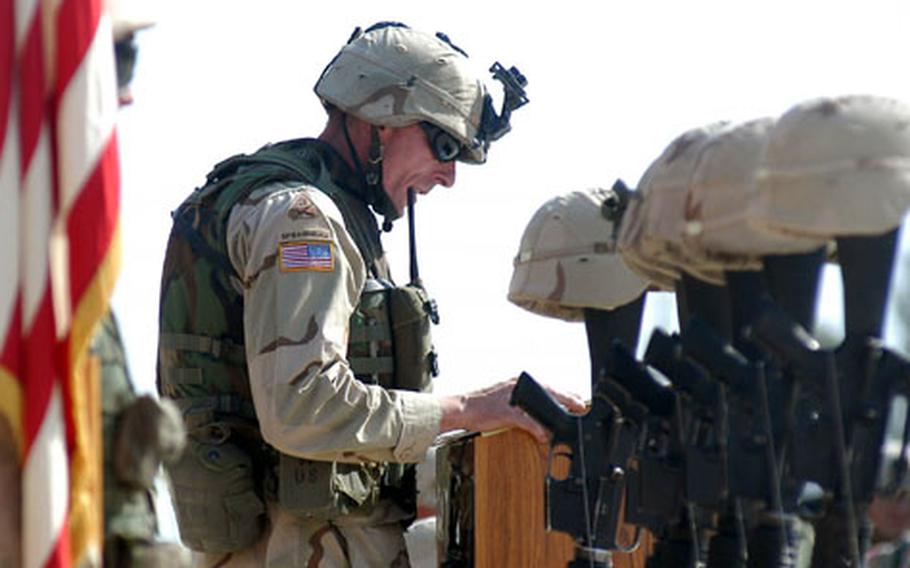 As 500 soldiers listened, only the sound of the Apache helicopters overhead could be heard.

Like the six other soldiers memorialized Saturday under a blazing Baghdad sun, and whose names were called during the traditional roll call at the service, Sheehan was killed in a firefight April 4.

Like the six others, all part of the 2nd Battalion, 5th Cavalry Regiment, 1st Cavalry Division, he was killed in a Shiite slum on the outskirts of Baghdad three weeks after getting off a troop plane from Fort Hood, Texas.

Like all eight soldiers killed that night &#8212; Sgt. Michael W. Mitchell of the 1st Armored Division was memorialized earlier &#8212; he was part of a quick response team that rushed out of Forward Operating Base Eagle to rescue a platoon pinned down by gunfire in Sadr City after what had been a routine patrol by four Humvees.

On FOB Eagle, less than a mile from where the soldiers were killed, each of the dead was remembered briefly. One was confident and well-liked, another was thought to be a little naive, with a good sense of humor. One was very generous, another was exceptionally strong, and after he was wounded, he gave the thumbs-up sign to say he was doing fine. Several were married and had children. One had four daughters and a son on the way.

They were all about 25 years old, except for Chen, who was in his 30s, had become a U.S. citizen while in the Army and spoke five languages.

The battle was one of the worst single losses for U.S. soldiers since the fall of Baghdad a year before. The firefight lasted into the early morning of Monday, wounding some 50 soldiers who went out in waves to put down the attack by a militia loyal to Shiite cleric Muqtada al-Sadr.

Bradley fighting vehicles, tanks and air support finally put down the uprising, one of several in Iraq that day.

Capt. Brian O&#8217;Malley, a 1st Cav spokesman, said the soldiers killed were riding in lightly armored tactical trucks. That taught a brutal lesson, he said. &#8220;More armor. From now on, tanks and Bradleys will do rescues,&#8221; he added.

The dead were remembered as brave soldiers, who went willingly to battle and whose finest hour came as they met their deaths for country and their fellow soldiers.

The same could be said of Cannon, who was among the wounded. He&#8217;d been gone from his soldiers for six days &#8212; too long, he said. His wound was really nothing, he said, just the back of his calf, the bullet went in and out, he was barely limping. He could not wait to get back to the base, and back to the soldiers.

Volesky mentioned those, the ones itching to get back out. He said he had asked some soldiers who had returned already to safety if they wanted to go back into the fray.