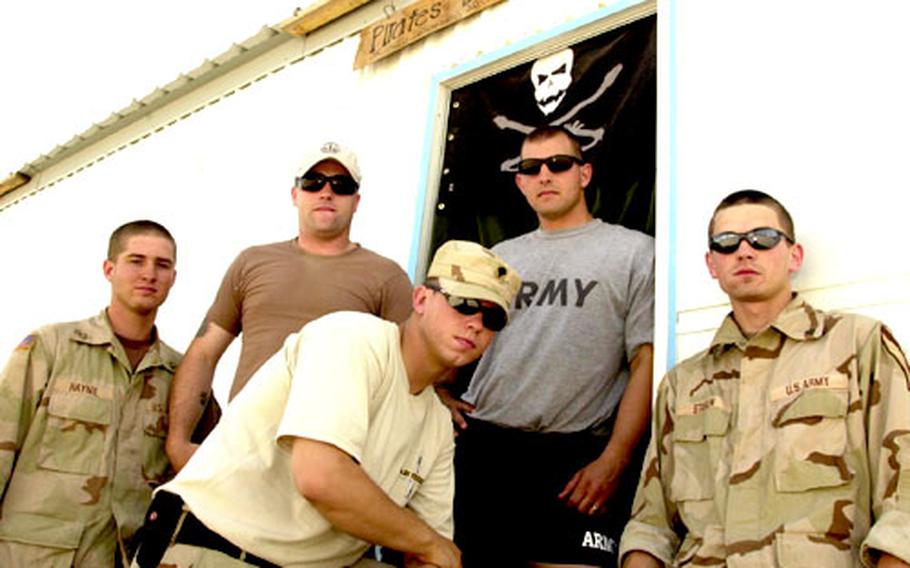 Usually it&#39;s the firefights that get scouts&#39; attention. But a big cache of artillery shells eclipsed that. "We all knew when we saw (the cache) we had saved a lot of lives that night," said Spc. Owen Starlin, far right. From left are scouts Spc. Keith Haynie, Sgt. Aaron Bibb, Spc. Kyle Clayton, Sgt. Billy Burrus and Starlin. All took part in capturing the weapons cache. (Terry Boyd / S&S)

First Cavalry Division officials are analyzing artillery shells that were part of a weapons cache seized Saturday night outside Baghdad.

Ordnance experts are analyzing the shells, trying to determine if they&#8217;re conventional 155 mm artillery shells or if they contain other substances, including sarin nerve gas or phosphorus, said Maj. Derik von Recum, spokesman for the 1st Cav&#8217;s 2nd Brigade.

On Saturday, a roadside bomb using a 155 mm shell filled with sarin exploded in Baghdad. It&#8217;s unclear whether that bomb is connected to this weapons cache.

Some of the shells were leaking, according to soldiers on the scene. Even if the shells turn out to be conventional, it would still be one of the most significant weapons seizures during the Fort Hood, Texas-based 1st Cav&#8217;s four months in Iraq.

A team of Dark Horse scouts from 2nd Platoon, Troop D, part of the 1st Cav&#8217;s 9th Cavalry Regiment, seized the cache, which included 43 artillery shells, each weighing about 90 pounds.

Slowly, word began to filter back to the scouts from explosive disposal soldiers that the find might be more significant than first thought.

Starlin and other soldiers say that even if the find turns out not to contain sarin, it&#8217;s still 43 fewer roadside bombs, the only way insurgents can use howitzer shells.

The night started out routinely, with two teams of scouts working observation points in a rural area northwest of central Baghdad.

Starlin said he was scanning outside his sector &#8212; looking past an earthen berm concealing his position &#8212; with high-powered night surveillance equipment when he noticed four Iraqis pull up and start working with irrigation equipment.

But on a second scan, he saw the men begin pulling munitions out of the small flatbed truck.

The men kept pulling out 155 mm artillery shells, one after another, he said.

At a relatively close range, Starlin said he could have taken out the men with his 240B.

Instead, the order came to try to capture the men along with their cache.

As scouts closed in, the men ran for it. A poor decision.

After that, the two gunners fired on the palm grove where they believed the remaining man was hiding, but found no bodies in the tall grass.

What they did find was artillery shells and fuses, four Russian-made AT-3 Sagger anti-tank guided missiles, an improvised rocket launcher capable of firing nine rockets simultaneously, and assorted weapons including a G-3 Heckler and Koch German-made assault rifle, said Haynie.

Each hole was full of artillery shells, with more rounds set in between the holes, he said. He considers the night &#8220;an early birthday present,&#8221; with the seizure coming two days before his 21st birthday, Starlin said.

The seizure is one more in a string of productive nights for the Dark Horse scouts, who&#8217;ve killed or captured at least 30 insurgents since March. They have also scored major intelligence coups, including lists of insurgent leaders and addresses, as well as lists documenting attacks against U.S. soldiers.