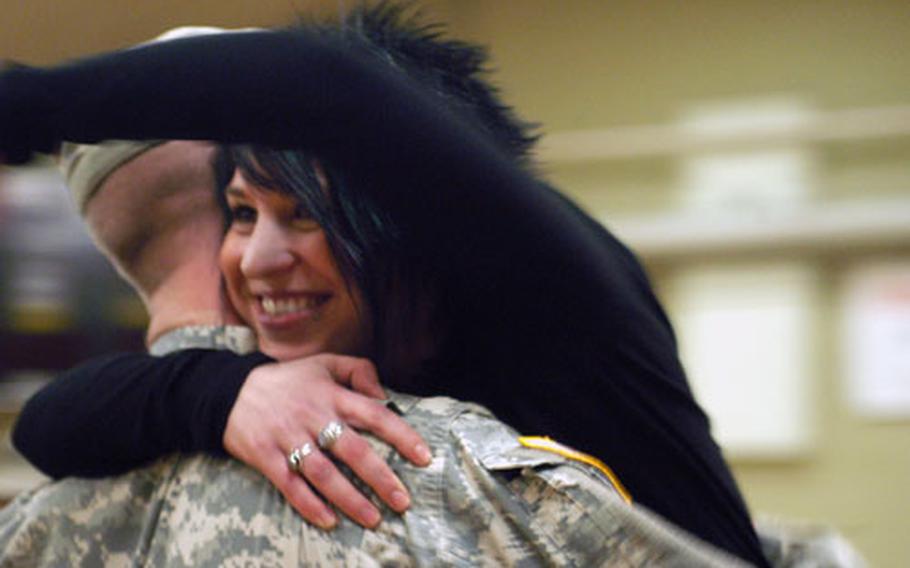 FRIEDBERG, Germany &#8212; At about 1 a.m. Wednesday, Teresa Dinsmore strode across the gymnasium at Ray Barracks and took a seat in the bleachers with a handful of other Army wives. Despite the hour, she was wide-eyed and in a remarkably good mood.

Sgt. Gregory Dinsmore and about three dozen other soldiers of the 1st Brigade Combat Team, 1st Armored Division &#8212; including Col. Sean B. MacFarland, the brigade&#8217;s commander &#8212; returned in the wee hours of the morning Wednesday from a nearly 14-month tour in Iraq. A much larger contingent of soldiers who had been attached to the brigade returned to Wiesbaden at the same time.

Teresa Dinsmore stayed at a friend&#8217;s house the last three days because she wasn&#8217;t able to move in her house anymore after she covered nearly every surface of her living room &#8212; including the couch and floor &#8212; in cutout hearts made from paper she spent hours dyeing with red ink.

Her husband has been busy, too.

Nine months ago, the brigade moved from Tal Afar in northern Iraq to Ramadi, home to two-thirds of the population of Iraq&#8217;s largest province, Anbar. The city was an insurgent stronghold that, MacFarland said, al-Qaida had decided to make the &#8220;capital of al-Qaidastan.&#8221;

But his brigade, with no small measure of assistance from local sheiks &#8212; in particular Sheikh Abdul Sattar &#8212; turned the tide in the city in nine months. The stalemate there, which was widely reported after the leak of a classified Marine intelligence report in September, is broken, MacFarland said.

By reaching out to local sheiks for advice, driving out al-Qaida-linked terrorists and staying in the city to keep it safe afterward, the brigade got the population &#8212; almost exclusively Sunni Arabs &#8212; to join U.S. forces in battling the insurgency, MacFarland said.

&#8220;One thing Sheikh Sattar keeps saying is he wants al-Anbar to be like Germany and Japan and South Korea were after their respective wars, with a long-term American presence helping ... put them back together,&#8221; MacFarland said. &#8220;The negative example he cites is Vietnam. He says, yeah, so, Vietnam beat the Americans, and what did it get them? You know, 30 years later, they&#8217;re still living in poverty.&#8221;

First Lt. Brad Rice, a member of the brigade&#8217;s Headquarters and Headquarters Company, said Ramadi was &#8220;probably one of the toughest missions we could have had down there,&#8221; and the momentum the unit generated in moving the city toward peace is potentially beneficial to all U.S. forces in Iraq.