1st BCT soldiers, just back from Iraq, raking in refunds 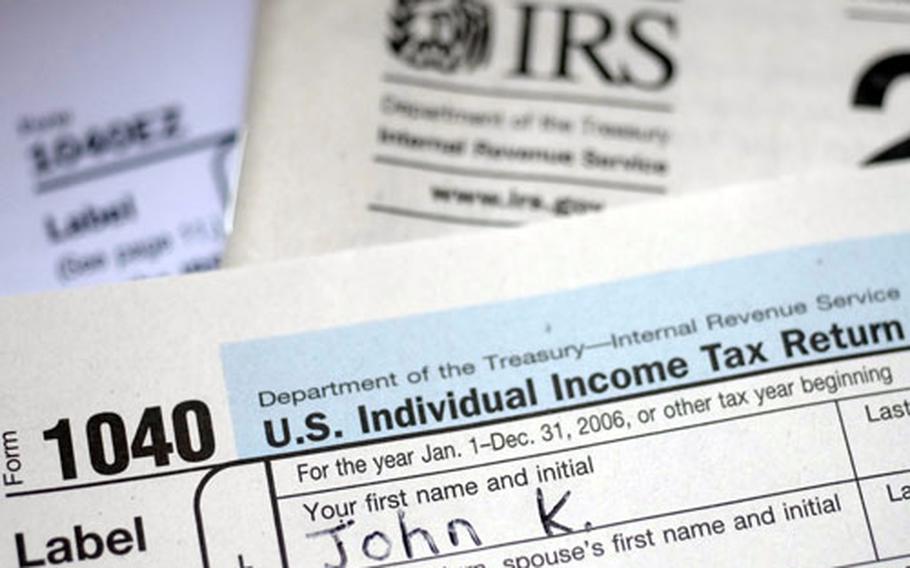 So far, troops of the 1st Brigade Combat Team have gotten more than $1.6 million in federal and state tax refunds. (Michael Abrams / S&S)

FRIEDBERG, Germany &#8212; The Internal Revenue Service isn&#8217;t entirely without a sense of humor.

Take, for example, this F.J. Raymond quotation posted on the service&#8217;s Web site: &#8220;Next to being shot at and missed, nothing is really quite as satisfying as an income tax refund.&#8221;

Soldiers of the 1st Brigade Combat Team, 1st Armored Division, who celebrated their return from Iraq last week, know the truth of this quip better than most. After dodging insurgents for some 14 months, troops stationed at Ray Barracks have raked in more than $1.6 million in federal and state tax refunds &#8212; and only about half the soldiers here have filed their taxes.

The post&#8217;s tax center has filed 729 returns since opening Feb. 5. But, because most of the post&#8217;s soldiers have taken off on 30 days&#8217; block leave, traffic to the center has dropped and much of its staff has been loaned out to buttress tax centers in Wiesbaden, Giessen and B&#252;dingen. With tax deadlines banging at the door, this might be the only military tax center in Europe that isn&#8217;t busy.

&#8220;I&#8217;m expecting probably somewhere between another 200 to 400 returns in that first two weeks alone when they get back from block leave,&#8221; said Capt. Nathaniel Babb, the officer in charge of the tax centers in Friedberg and Giessen. By his estimates, at least 500 and as many as 1,000 Friedberg troops still have to file their 2006 taxes.

Soldiers who just returned from a combat zone don&#8217;t have to rush back to pay the tax man, though, because they aren&#8217;t held to the same deadlines as people who didn&#8217;t spend time in a war zone.

According to Babb, a servicemember who served in a combat zone has 180 days from the date they leave the combat zone to file their taxes and pay any taxes due. Soldiers could have even more time to file depending on when they deployed, he said, but cautioned against relying on those extra days.

That means most 1st Brigade soldiers have at least until August to file their 2006 taxes.

The number of returns for years prior to 2006 surprised Babb. He briefed large groups of 1st Brigade soldiers as they returned from deployment, and asked every group if anyone had already filed their 2005 taxes while they were downrange. He hoped to see a lot of hands go up, but &#8220;every time it was only a handful,&#8221; he said.

In addition to the $1.6 million in returns, the center has saved servicemembers $189,894 in tax preparation fees, Parker said. Servicemembers who would rather not wait to be seen at their local tax center have other free tax-preparation options.

Free online federal and state tax preparation is available through the Military OneSource Web site, which is run by the Department of Defense. The site can also direct servicemembers to free services offered through the IRS.

But regardless of what service servicemembers use to prepare and file their taxes, Babb recommends getting them done sooner rather than later.