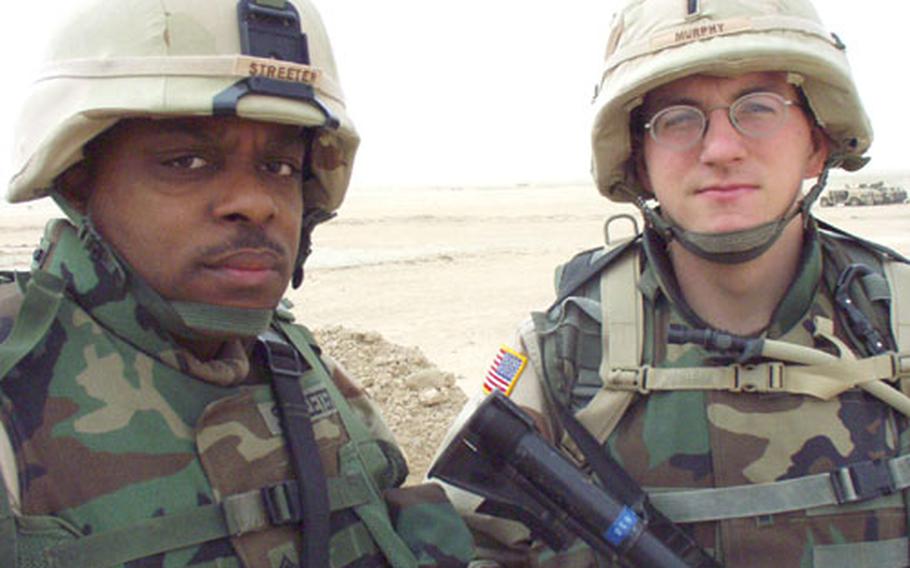 Today, bulked-up with 200 extra troops and retrained as foot soldiers, most of the members of the renamed Task Force 1-77 slog through the sand as infantry.

Task Force 1-77 is just a small piece of the 1st Infantry Division team now staging in Kuwait before heading north to patrol a chunk of the dangerous Sunni Triangle north of Baghdad.

The transformation of 1-77 Armor into Task Force 1-77 is only an example of what&#8217;s happening throughout the division and, in fact, throughout the Army as the first wave of troops in Iraq gives way to the second this spring. It is a sign of changes to come, as the Army prepares to scrap its divisions and find a more flexible structure.

Most of the 1-77 Armor&#8217;s tanks remained in Germany, its men assigned to Humvees. An entire company has been swapped out to another infantry unit, and platoons have switched among companies. Even the headquarters company, accustomed to administrative and maintenance duties, will be hefting rifles and going on patrols. A New York National Guard unit will join the Task Force 1-77 once it reaches Iraq.

Although in the works for months, the changes didn&#8217;t take place until the battalion landed at Camp New York on Feb. 12. Since then, tankers and infantrymen who barely know each other have been training together long and hard, hoping to quickly build unit cohesion before they head north to take on a wily and elusive enemy.

A task force is an ad-hoc unit that falls outside traditional military structures such as Army divisions, Navy battle groups or Air Force air wings. They have been used extensively since at least World War II, said retired Col. David Hackworth, a decorated veteran of three major wars and self-styled crusader for the common soldier through his on-line organization, &#8220;Soldiers for the Truth.&#8221;

Hackworth has fiercely criticized the Pentagon&#8217;s handling of the Iraq war, not least its use of tanks against the Iraqi guerrilla forces he refers to as &#8220;G.&#8221; But he thinks this is one thing the generals are doing right.

&#8220;Forming ad-hoc task forces makes perfectly good sense for the situation in Iraq,&#8221; Hackworth said in an e-mail. &#8220;The commanders there have almost a year&#8217;s experience and this has told them what kind of an organization they need to slug it out with the G.&#8221;

With two Kosovo tours under its belt since 1999, the 1st ID brings experience with the kind of peacemaking operations needed in Iraq more than any other Army division.

But the &#8220;Big Red One&#8221; also is a heavy mechanized division, traditionally lumbering and slow. It was built for countering the Cold War threat of Soviet tanks, not killing the hit-and-run Fedayeen of Iraq.

So the division&#8217;s commander, Maj. Gen John Batiste, has ordered it remade for the Iraq mission in keeping with Secretary of Defense Donald Rumsfeld&#8217;s vision of a faster, nimbler force.

Making these ad-hoc outfits work falls to company commanders such as Capt. Henry Delacruz, 31, of Athens, Ga., commander of Task Force 1-77&#8217;s Company B. A tank officer by training, he now finds himself in command of an infantry unit, 90 percent of whose troops are infantrymen he didn&#8217;t know before coming to Kuwait.

Infantry soldiers (known as 11 Bravos, in Army parlance) and tankers (known as 19 Kilos) come from sharply different military cultures. The infantrymen are hard-charging and action-oriented. Tankers are easy-going and team-focused.

For one thing, most of them are veterans of a 2002 Balkans peacekeeping rotation, another infantry-oriented mission in which their companies and platoons were cut and pasted into task forces.

Also, every soldier learns some infantry skills in basic training. So, even for long-time tankers, the retraining is more a matter of polishing up old skills than learning new ones.

Tankers say, too, that fundamental battle techniques are fairly easy to transfer from a tank to Humvee. Each uses a driver, a gunner, a loader and a commander who function in the same way. Obviously, though, a tank offers more firepower and more protection.

The biggest loss for tankers may be the camaraderie of the 16-man tank platoons, which become exceptionally tight-knit living and working in such close confines.

1st Lt. Fran Murphy, 23, of Lexington, Ky., commands the Company B 1-77 Armor platoon that has been sent to Task Force 1-18. He knows his four tanks probably will be parceled out to different units. He relishes the challenge of the Iraq mission, but the breakup of his platoon is hard to take.

Which brings up the question of unit cohesion, the glue that binds a military unit together and makes it effective in combat. Can it survive in the modern world of pasted-together military task forces?

Hackworth thinks it can.

Still, the 1st ID and its task forces face a giant challenge during its yearlong mission. Soldiers must find a way to pacify the stubborn Sunni Triangle and ready it for democracy. And they&#8217;ll be doing it without the safety of armored tanks.