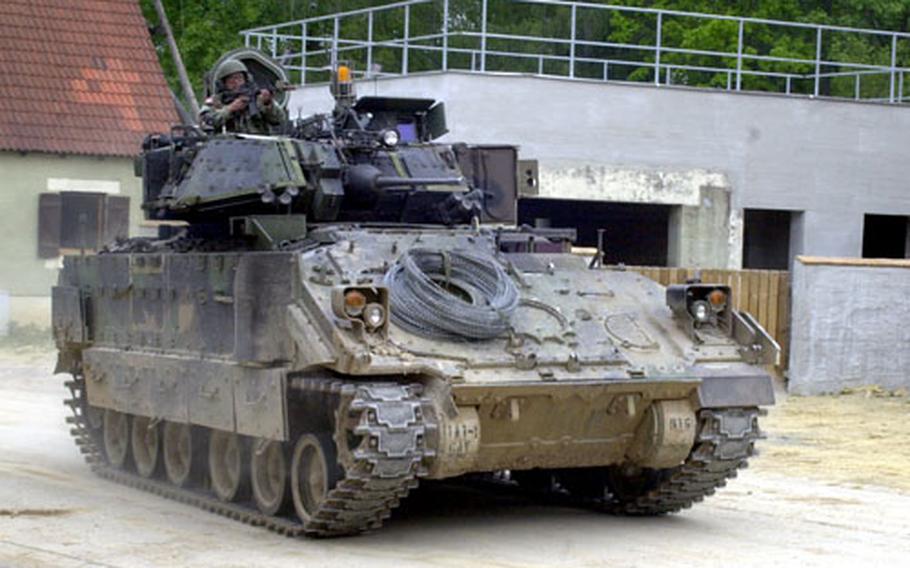 Soldiers from Troop B, 1st Squadron, 1st Cavalry Regiment aboard a Bradley fighting vehicle roll into the fake town of Ubensdorf at the Joint Multinational Readiness Center in Hohenfels, Germany, on Thursday. They were warming up for Iron Storm, an excercise involving 1,000 1st Armored Division troops that began Saturday. (Seth Robson / S&S)

Soldiers from Troop B, 1st Squadron, 1st Cavalry Regiment aboard a Bradley fighting vehicle roll into the fake town of Ubensdorf at the Joint Multinational Readiness Center in Hohenfels, Germany, on Thursday. They were warming up for Iron Storm, an excercise involving 1,000 1st Armored Division troops that began Saturday. (Seth Robson / S&S) 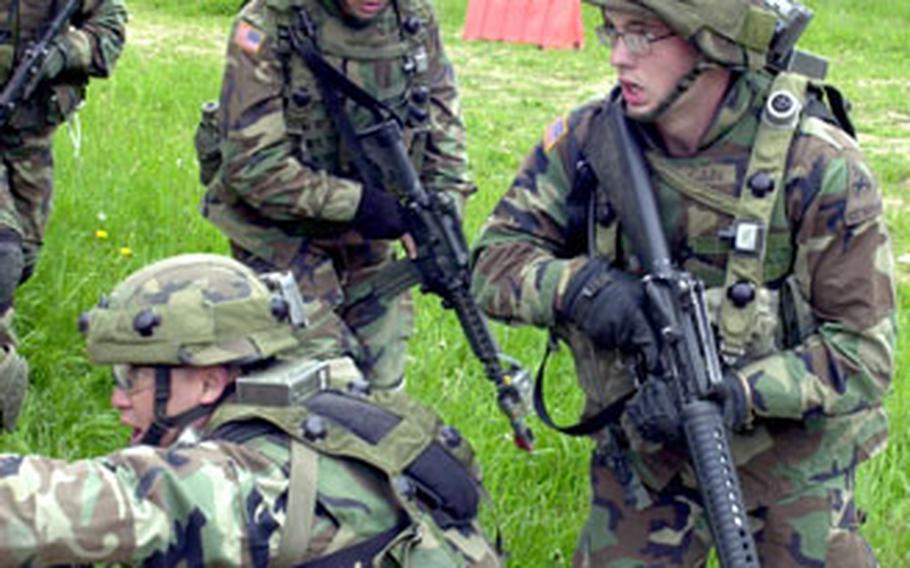 HOHENFELS, Germany &#8212; Iron Storm, an exercise involving 1,000 1st Armored Division soldiers that kicked off Saturday, marks a return to conventional training after a year in which the Joint Multinational Readiness Center focused on counter-insurgency tactics.

For the past year, most of the units that have trained at Hohenfels have been preparing to deploy to Iraq or Afghanistan. However, the 1-1 Cav is not scheduled to deploy, officials said.

&#8220;In the past our brigades have done rotations that focused on global war on terror tasks, such as counter-insurgency operations,&#8221; said Baugh, 28, of Annapolis, Md.

&#8220;To maintain our flexibility to fight any kind of fight in the world, this rotation is focused on high-intensity conflict. This training is focused more toward a conventional war.&#8221;

The 1-1 Cav, which deployed to Iraq from April 2003 to July 2004, is the largest combat arm of the 1st AD left in Germany. Two 1st AD brigades are in Iraq and Kuwait while another is based in the U.S., Baugh said.

Other units participating in Iron Storm include the 123rd Main Support Battalion, 501st Military Intelligence Battalion, the 502nd Engineer Company, the 141st Signal Battalion as well as elements of the division&#8217;s 4th Brigade (aviation) including the 6th Squadron, 6th Cavalry Regiment and the 45th Medical Company, he said.

The exercise is the first time the division has done a rotation using Shadow Unmanned Aerial Vehicles. Twelve UAVs will be beaming images from the battlefield directly to commanders at a tactical operations center, Baugh said.

The exercise scenario involves efforts by the U.S. to re-establish a transitional boundary between two mythical countries after an invasion of one country by the other, he said.

On Thursday, soldiers from the 1-1 Cav&#8217;s Troop B warmed up for the exercise by cordoning off Ubensdorf, a fake town inside the training area at Hohenfels, then raiding a building to distract the enemy while another unit captured a &#8220;high-value target&#8221; who had been spreading anti-U.S. sentiment among the population.

For about a half-hour, smoke billowed out of windows and blanks rattled as the Troop B soldiers and the &#8220;opposition force&#8221; enemy fought around the town.

&#8220;We get more free play opportunities as insurgents. The conventional fights are pretty well scripted: The enemy is here. You will go this route and attack them with this.

&#8220;As an insurgent, we have more weapons and tactics we can use. They give us a set amount of weapons per day and say this is what we want you to hit, but we always have targets of opportunity,&#8221; he said.