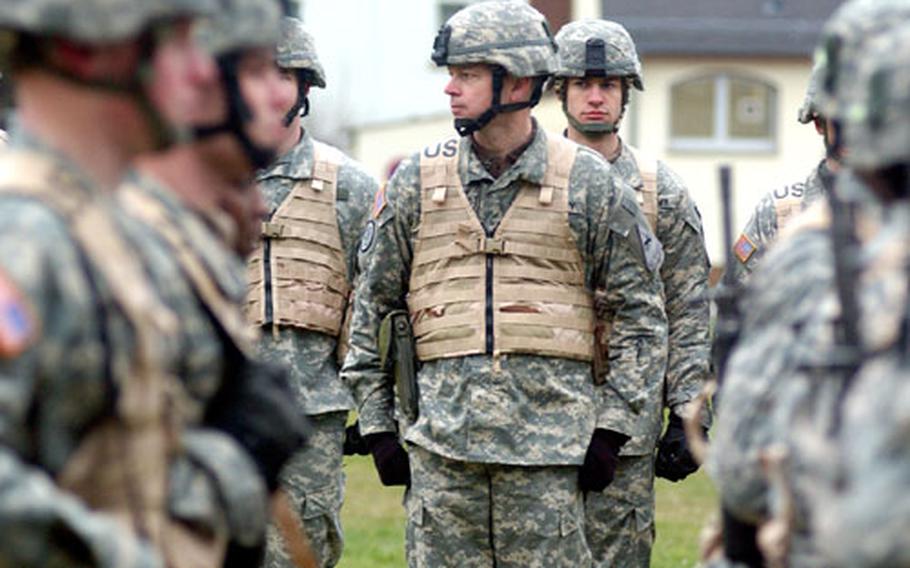 Col. Sean B. MacFarland, commander of the 1st Brigade, 1st Armored Division, watches his troops pass in review at the end of the 1st Brigade Combat Team deployment ceremony at Ray Barracks in Friedberg on Thursday. The 1st BCT is heading to Iraq for its second Operation Iraqi Freedom tour. (Michael Abrams / S&S)

Col. Sean B. MacFarland, commander of the 1st Brigade, 1st Armored Division, watches his troops pass in review at the end of the 1st Brigade Combat Team deployment ceremony at Ray Barracks in Friedberg on Thursday. The 1st BCT is heading to Iraq for its second Operation Iraqi Freedom tour. (Michael Abrams / S&S) 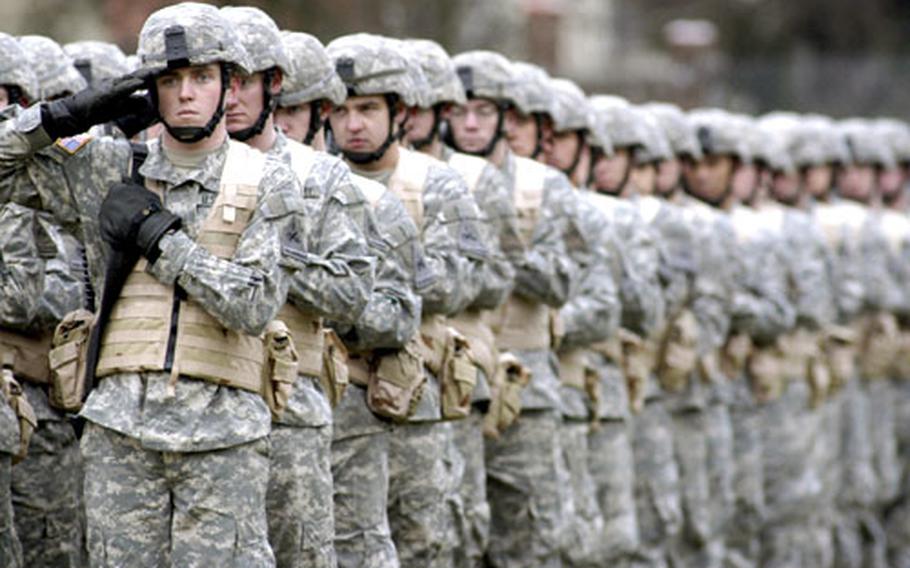 Soldiers of the 1st Armored Division&#39;s 1st Brigade Combat Team salute during the playing of the national anthem at Thursday&#39;s deployment ceremony at Ray Barracks in Friedberg. (Michael Abrams / S&S) 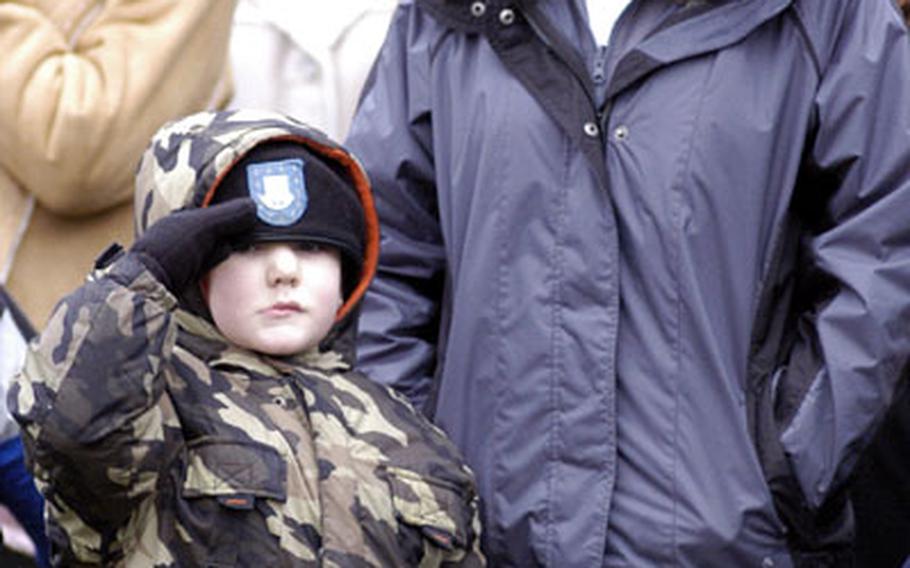 Kadence Kisko, 5, son of Sgt. Garry Kisko, wears an army beret as he salutes during the deployment ceremony at Ray Barracks. At right is his mom, Christi. Sgt. Kisko is assigned to 1st Battalion, 37th Armor Regiment. (Michael Abrams / S&S) 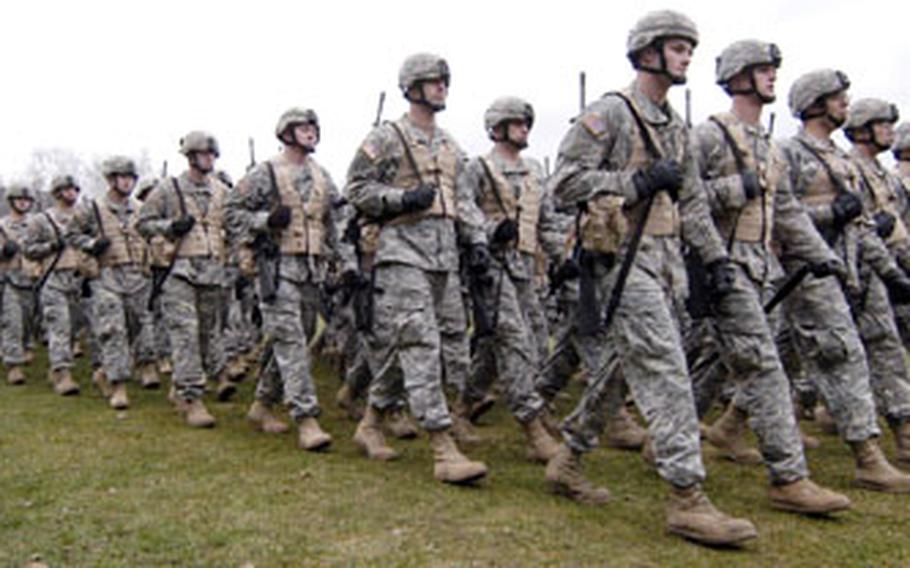 Soldiers of the 1st Armored Division&#39;s 1st Brigade Combat Team march off the parade field at the end of the deployment ceremony. (Michael Abrams / S&S)

FRIEDBERG, Germany &#8212; With a stolid resolve that matched the gray sky above, the 1st Armored Division&#8217;s 1st Brigade said goodbye to Germany for a second deployment to Iraq on Thursday morning during a ceremony at Ray Barracks.

Ready First soldiers headed into Iraq in May 2003 for an approximately one-year tour, and returned about 18 months ago. Now, the same unit will start heading out in the coming weeks for another year at an undisclosed location in Iraq.

Members of the 1st AD&#8217;s 2nd Brigade are already in Kuwait and are scheduled to remain there as a call-forward force for the U.S. Central Command.

Soldiers and spouses alike said Thursday that this tour would be different than the last.

Barnum expects a more sophisticated enemy, one that has honed its use of roadside bombs and car bombs. &#8220;It&#8217;s a difference between night and day with these deployments,&#8221; he said.

But the U.S. military has also had time to establish itself, and Barnum said he looks forward to more infrastructure for the troops.

More time will be spent working with Iraqi forces this time, he said, and the soldiers will need to take care of one another.

Col. Sean MacFarland, commander of troops for the brigade, greeted his soldiers Thursday on what he called &#8220;a somber and otherwise chilly morning.&#8221;

&#8220;I&#8217;m sure every Ready First soldier will remember this day fondly, especially when the temperature gets over 100 degrees in the summer,&#8221; he said of the coming Iraqi heat.

MacFarland said the Iraq of 2006 is vastly different from the one the brigade departed in 2004.

Before the ceremony, Anna Gonzalez sat in the bleachers, waiting for her husband, Sgt. David Gonzalez, to appear with the rest of the brigade.

With a second deployment, there is a lot of concern, she said, adding that she is pregnant and expecting in June.

Sharon Johnson, whose husband, Sgt. Lawrenzo Johnson, was being deployed for a third time, said she and their 10-year-old daughter have gotten used to it.

Standing with his wife, Kimberlee, after the ceremony, Sgt. Peter Bazo said he was last downrange with the 1st AD&#8217;s 2nd Battalion, 3rd Field Artillery Regiment, on the tail end of the invasion force in 2003.

Pride was the main emotion many spouses said they felt Thursday as they prepared to be separated once more from their loved ones.