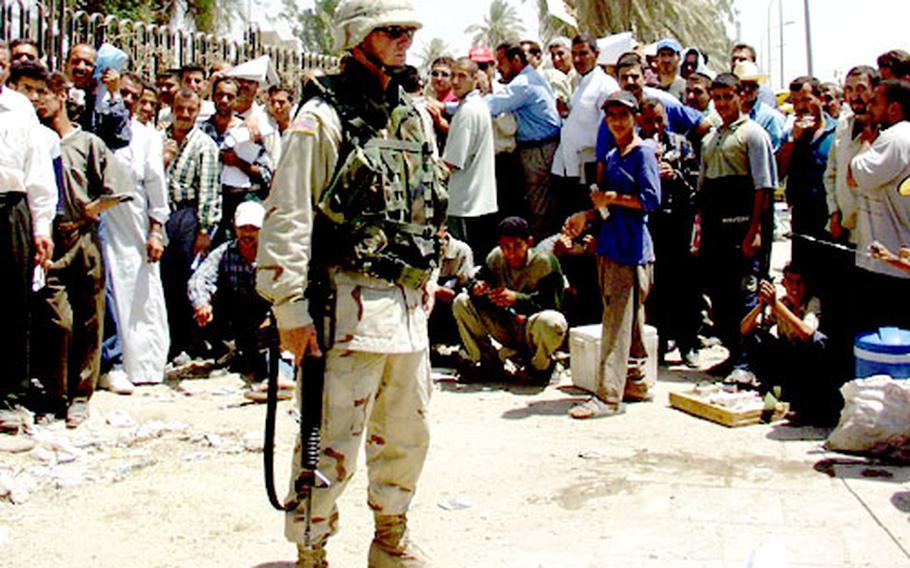 BAGHDAD &#8212; The same soldiers who served former Iraqi leader Saddam Hussein seem every bit as eager to serve in a new army organized by Americans, judging by the massive lines stretching down the block from a 3-day-old Baghdad recruiting center.

The new Iraqi army has three recruiting centers: in Baghdad, Basra and Mosul. A fourth center is scheduled to open in Irbil as soon as arrangements can be completed with local authorities, Combined Joint Task Force-7 officials said.

The 1st Armored Division&#8217;s Battery C, 4th Battalion, 27th Field Artillery from Baumholder, Germany, which is part of the 1st AD&#8217;s 2nd Brigade, has been one of the units responsible for pulling crowd security for the Baghdad recruiting center since it opened July 19. Capt. Jim Hickman, an Atlanta native, commands the battery.

Late on Monday morning, Hickman&#8217;s unit was out in the blazing sun, coping with a crowd that ran three-deep down the block.

Hickman&#8217;s unit, which has been in the Baghdad area since April, was assigned to the recruiting station duty after performing a variety of missions, including mounted and dismounted patrols, according to Staff Sgt. Jeff Dayton.

Sgt. Dimas DeLeon, a Houston native, said he gets his men up at 5 a.m. for the new guard duty, even though the recruiting center is steps away from Forward Operating Base Thunder where the section beds down.

At 8 a.m. sharp, the soldiers begin handing out army applications, which are written in Arabic, said 1st Lt. Christian Labra of Pawling, N.Y., who is part of Battery C.

According to coalition officials, the army will be open to all male Iraqi citizens between the ages of 18 and 40. But former top-level Baath party members, Special Republican Guard soldiers, and top-level security and intelligence officers need not apply.

The soldiers of Battery C, however, are not making any effort to prescreen the crowd &#8212; just control it.

Getting an application for the new army is only the first step in what looks to be a lengthy process.

Once the applications are distributed, there is no action at the recruiting centers for most would-be Iraqi soldiers until 1 p.m., when the U.S. soldiers open the gates to groups of 20 to 25 at a time, Hickman said.

After a pat down for weapons, the groups are sent to the civilian managers of the recruiting effort, who make appointments for full screenings at a later date.

The authorities set up 172 appointments on July 19 and another 218 on July 20, Labra said. He did not try to estimate how many appointments might be made by day&#8217;s end Monday.

The screening will be conducted &#8220;like the normal [recruiting] station in the United States,&#8221; Hickman explained.

Recruits must pass medical, dental and background checks; answer questions about their previous military service; and go through an interview.

Hayder Ali, a former sergeant in Saddam&#8217;s army and father of a 1-year-old, was among the first in line Monday morning, waiting for a chance to schedule his interview.

Ali, for one, said he is planning to wait for a spot in the new army no matter how long the process takes.

Asked whether he is angry at the Americans for bombing his city, Ali smiled.