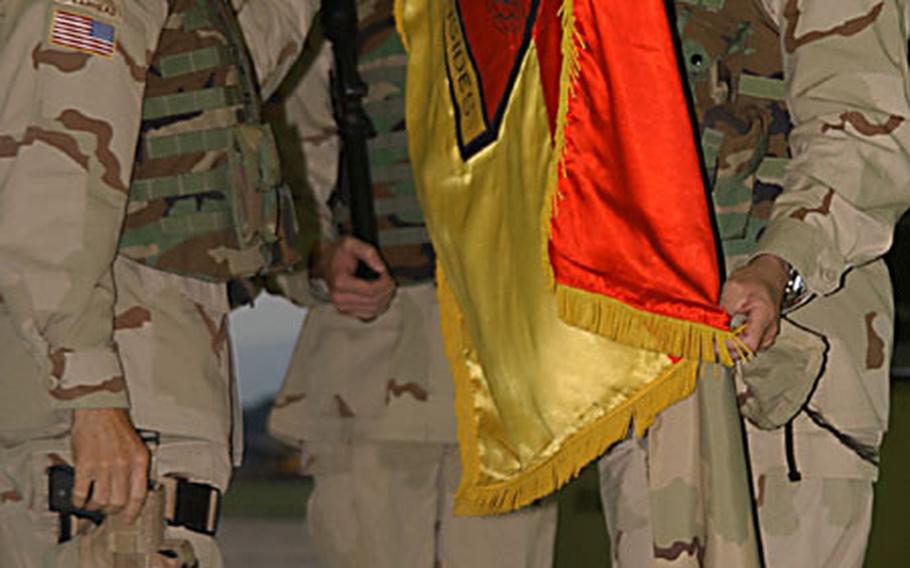 WIESBADEN, Germany &#8212; The 1st Armored Division&#8217;s colors were uncased on familiar ground Wednesday night when the commander, Maj. Gen. Martin Dempsey, and a small group of soldiers set foot on Wiesbaden Army Airfield for the first time since the division deployed more than a year ago.

During a brief ceremony, Dempsey and division Command Sgt. Maj. Michael Bush unfurled the 1st AD&#8217;s flag to the cheers of the roughly 100 soldiers and family members in attendance.

After the ceremony, children waved miniature versions of Old Glory and played tag as parents and friends welcomed the warriors home.

In addition to the general&#8217;s driver and his aide de camp who returned to Wiesbaden with Dempsey on Wednesday, 300 soldiers returned to Baumholder, 82 to Hanau and 48 to Friedberg.

About 3,000 1st AD troops have returned, and roughly 12,000 more soldiers are due back by August, according to a division spokesman.

The division was extended for three months on April 19 to help combat a surge of violent uprisings.