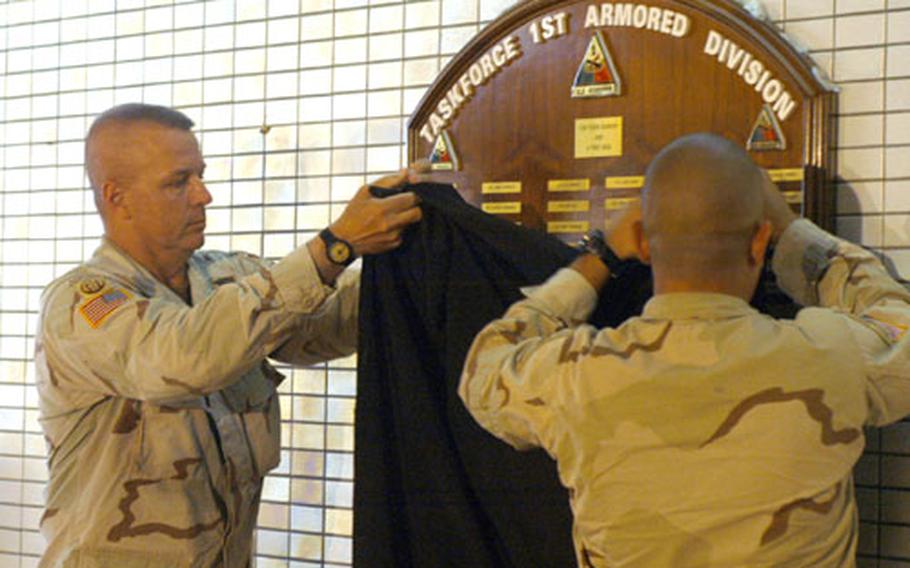 Command Sgt. Maj. Michael Bush, left, the 1st Armored Division command sergeant major, and Spc. Romulo Escobedo unveil a plaque honoring members of 1st AD task force killed in Iraq during a ceremony at Freedom Rest Sunday. Nearly 100 names are engraved on the plaque, about 40 of which died after the April extension of the division. (Jessica Inigo / S&S)

BAGHDAD &#8212; The 1st Armored Division memorialized nearly 100 task force troops who have died in Iraq during a ceremony at Freedom Rest on Sunday.

A large wooden and brass plaque bears the names of the troops at the entrance of the marble and gold-plated hallways of one of the former officers clubs for Saddam Hussein&#8217;s Republican Guard.

This is the second memorial ceremony Task Force 1st AD has done at Freedom Rest. The names of about 40 troops who were killed since April, when the division&#8217;s stay in Iraq was extended, were added to the plaque listing the dead, according to Capt. Douglas W. Deucker, Task Force 1st AD spokesman.

&#8220;This gives us a chance to pay respect to those fallen soldiers ... not everyone will be going home with us,&#8221; said Pfc. Jeffrey Sweeney, a member of the personal security detail for the command of Headquarters and Headquarters Company, 2nd Brigade Combat Team.

The majority of the task force is moving back to Germany after a 120-day extension. During that time, the 1st AD troops captured 269 insurgents and killed nearly 300 in four major attacks.

As Sgt. Mark Satter, of Headquarters and Headquarters Battery, Division Artillery, read the names of the troops over the Toby Keith country-music song &#8220;American Soldier,&#8221; those present reflected on the cost of soldiering.

Troops hung their heads in a moment of silence, then lined up quietly to salute or touch the plaque.

Maj. Gen. Martin Dempsey, 1st AD commanding general, said during the ceremony that the &#8220;iron soldiers&#8221; who gave their lives would never be forgotten by the division. A duplicate plaque will be put up at the division headquarters in Germany once the entire unit returns.