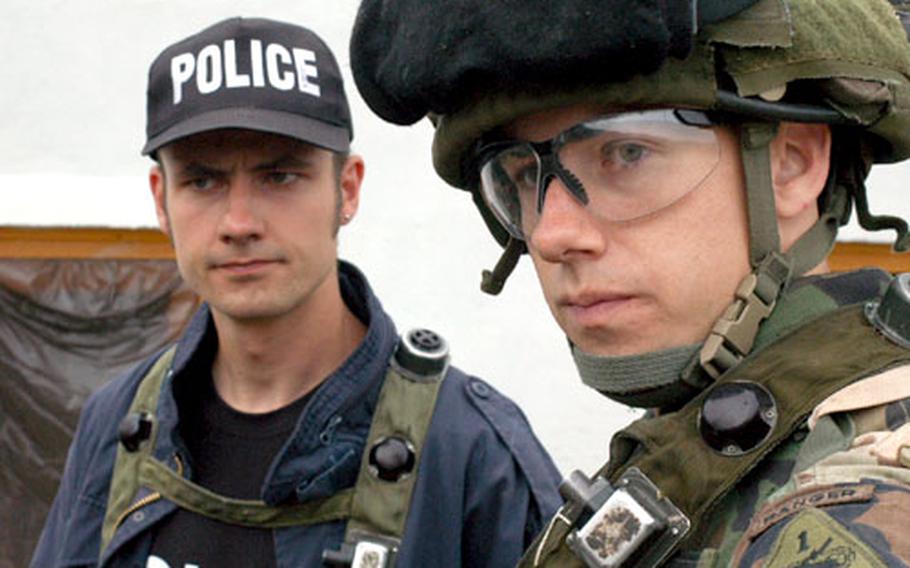 First Lt. Patrick Fagan, right, motions to his troops in Company A of the 1st Battalion, 35th Armored Regiment while talking to an “Iraqi policeman” at the Hohenfels training area Wednesday. As part of his unit’s preparation to return to Iraq this fall, Fagan’s unit was out hunting for a vehicle used in a fictional kidnapping of a U.S. citizen. (Ben Murray / S&S)

First Lt. Patrick Fagan, right, motions to his troops in Company A of the 1st Battalion, 35th Armored Regiment while talking to an “Iraqi policeman” at the Hohenfels training area Wednesday. As part of his unit’s preparation to return to Iraq this fall, Fagan’s unit was out hunting for a vehicle used in a fictional kidnapping of a U.S. citizen. (Ben Murray / S&S) 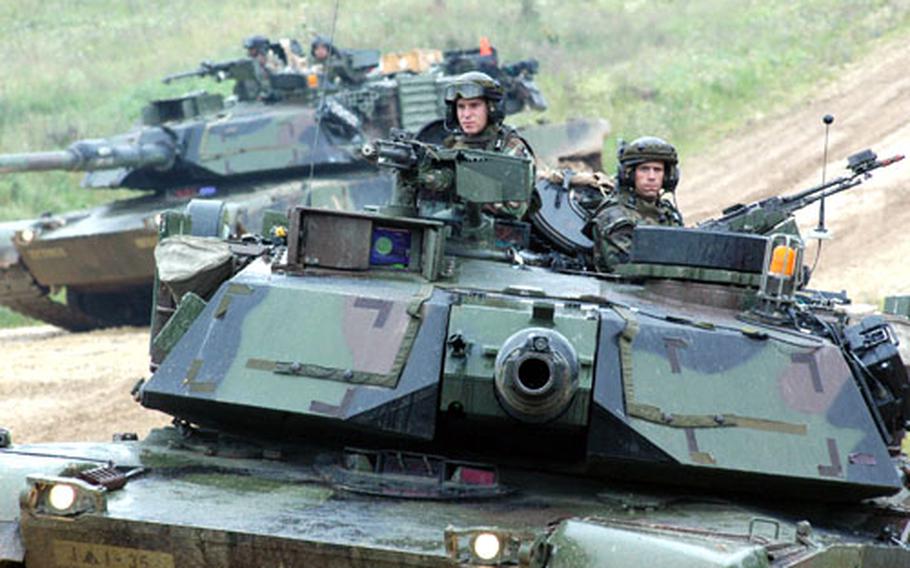 Members of one of the 1st Battalion, 35th Armored Regiment’s Wolfpacks scan a tree line for the source of shots that “wounded” several soldiers during a training scenario in Hohenfels, Germany, on Wednesday. The tanks are part of newly comprised mixed companies that include heavy armor, mechanized troops and Humvees being used by the 1st Armored Division’s 2nd Brigade Combat Team. (Ben Murray / S&S) 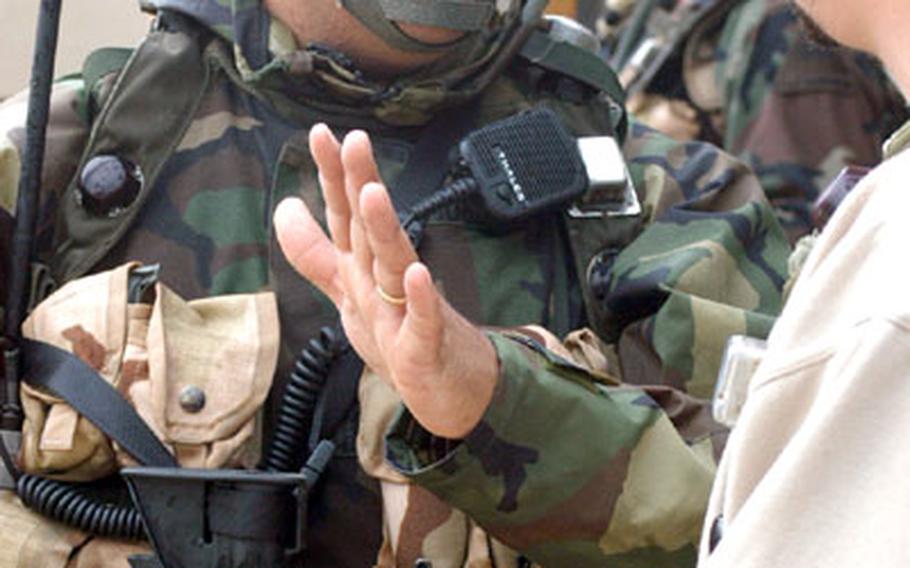 Hoping to gain some information on the cause of some disquiet in the town of "Tikrit" in the Hohenfels, Germany, training area Tuesday, Capt. Jason Conde, commander of Company A of the 1st Battalion, 35th Armored Regiment, talks with a community leader in the town. (Ben Murray / S&S)

HOHENFELS, Germany &#8212; More than two years ago, elements of the 1st Armored Division preparing to go to Iraq trained for battle in scenarios that, in the words of one soldier, were &#8220;more like Vietnam War stuff.&#8221;

Tank battles and open-field fighting were part of the regimen, with large-scale assaults against a defined enemy.

But these days, even as some politicos and legislators increasingly compare Iraq to the American military quagmire of 30 years ago, soldiers at the Hohenfels training area this week were preparing for an entirely different war zone, regiment members said.

Riding in a Humvee on his way to meet an informant in &#8220;Tikrit&#8221; on Tuesday, Conde said preparing for war in Iraq has little to do with offensive tactics, and much more to do with gathering information and talking to Iraqi citizens.

Troops from two companies of the 1-35th unanimously said the scenarios this time are more pertinent to the realities of Iraq, with missions set almost exclusively in urban settings and including a rash of ambushes, improvised explosive device attacks and even a kidnapping.

&#8220;Physically, it&#8217;s actually easier than it was before. Mentally, it&#8217;s more tough,&#8221; said Sgt. Alejandro Romar, another Company A soldier. In a firefight or a raid, training takes over and reactions become automatic, he said, but constantly trying to decide which people or roadside items have the potential to attack is taxing when &#8220;everything is something that can blow up,&#8221; he said.

But while soldiers agreed the scenarios have improved, many were more skeptical of the way the force is being set up to fight its coming battles.

While in Hohenfels this week, the 1st AD&#8217;s 2nd Brigade has been transformed into the &#8220;combat team&#8221; organization it will retain when it leaves for Iraq late in the fall. That allows commanders to mix and match pieces of the brigade&#8217;s assets to fit their mission, in this case creating companies of Humvee-borne troops backed by small groups of tanks and Bradleys.

On Conde&#8217;s mission to Tikrit, for instance, several Humvees rolled up to the town between the muzzles of an Abrams tank and a Bradley, which provided potent intimidation power on the edge of the city.

But when the soldiers moved into the town on foot, the armor stayed behind as a less-than-effective piece of an information-gathering patrol.

&#8220;The biggest thing we use the tank for is shock effect,&#8221; Conde said. But for some, the tradeoff for having that shock value was questionable.

&#8220;Right now, I have less people than I should,&#8221; said Romar, leading a squad of troops on foot. With part of the force dedicated to the bulky armor outside the town, the number of foot soldiers available had been cut, he said.

But Conde and others said the setup made the company more adaptable, allowing it to react to violent situations with a variety of forces.