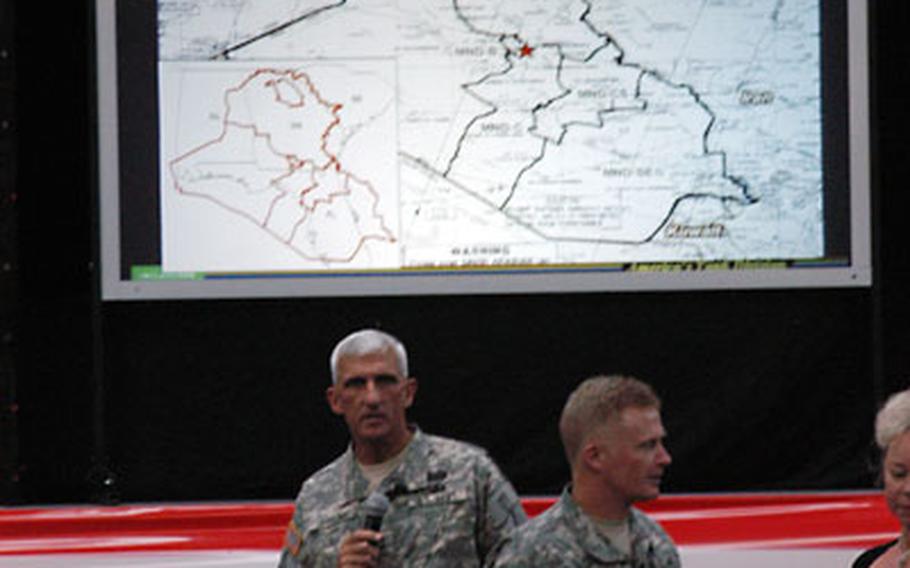 WIESBADEN, Germany &#8212; The harsh and haunting landscape of northern Iraq seemed at times worlds away, what with the jazz music, raffle prizes and a screaming Polynesian wannabe in a grass skirt.

Four years ago, in Wiesbaden, a small but similar pre-deployment gathering featured a balloon-twisting clown on a unicycle. Through trial and error, the U.S. Army has learned over these many combat tours to keep such community gatherings light, moving and informative, though usually not in that order.

When more than 1,000 soldiers and family members of the 1st Armored Division attended an hourlong briefing Wednesday, much of the focus was on acquainting people with various Wiesbaden support agencies. Given the time &#8212; an early evening in August &#8212; the goal was more about providing direction than resolution.

So this wasn&#8217;t the time for soldiers to review their wills, check their shot records and grab their gear. That day will come soon enough. Nor was it time for spouses to sit down with a financial counselor or their family readiness group. A public plug and phone numbers were sufficient.

Instead, it was a chance for Maj. Gen. Mark Hertling to lay out &#8212; especially for family members &#8212; what the headquarters staff will be doing during its 15-month tour in northern Iraq. He didn&#8217;t mince words.

He even mentioned two of the most common challenges facing returning soldiers: post-traumatic stress disorder and head trauma. He particularly wanted spouses new to all of this war stuff to be informed. Iraq can be a very violent and noisy place, and bodies take a beating, even if there are no exterior scratches.

It also drove home the point that the deployment is fast approaching.

The 1st AD headquarters staff is expecting to start deploying in a month. That means they&#8217;ll miss two Christmases, a presidential election, birthdays, anniversaries and countless moments, happy or sad.

Though he is single, Pfc. Sheb Angulo of the 146th Signal Company said he found the briefing informative. He also found it upsetting, knowing a lot of his fellow soldiers are already beginning to miss their families.

Back in the main gym, where the meeting was wrapping up, the jazz group was playing a little ditty and the last of the raffle prizes were being given away. The bright new gym and its rows of colorful state flags hanging from the rafters made for a rather cheery appearance.

Only minutes before, a legal beagle, a doctor and a finance guy were ripping through their talking points and contact information. There was useful information, serious talk and levity. Even the dentist, Lt. Col. Troy Marburger, was a hit.

Hertling and his staff wanted to keep the meeting fast and relevant. The hope is that the tour will follow suit.