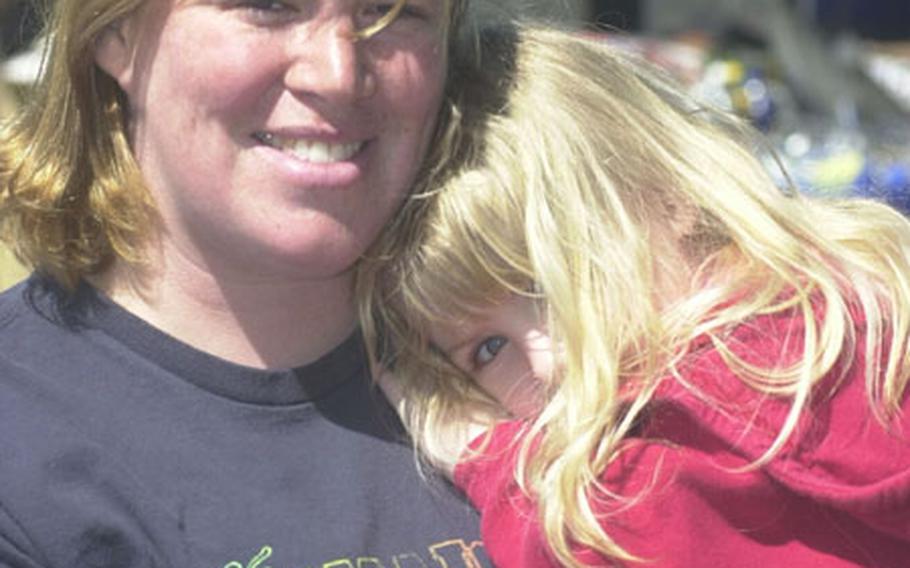 BAUMHOLDER, Germany &#8212; Soldiers&#8217; wives are hopeful, but skeptical, about news the 1st Armored Division may be coming home to Germany sooner than expected.

&#8220;We&#8217;re not going to believe it till they&#8217;re back standing in the [Hall of Champions] gym,&#8221; said Sarah Austin, referring to the main gymnasium from which soldiers traditionally deploy and return to H.D. Smith Barracks in Baumholder.

The 1st AD was scheduled to begin returning to Germany in April, but the Wiesbaden-based division was given a 90-day extension that was expected to total 120 days with demobilization. That would have meant most of the division wouldn&#8217;t have left Iraq until August.

An advance party of the Baumholder-based 2nd Brigade is due back June 20, according to several sources.

News of the pending early homecoming is spreading slowly here, though some details remain sketchy.

But in about a dozen interviews, spouses were reluctant to celebrate.

The reality for military spouses is if Iraq&#8217;s security situation deteriorates, as it did before the division was extended in April, then soldiers could end up being extended a second time, Alcorn said. &#8220;If it gets worse, need be they may have to stay.&#8221;

She believes the Army is short of soldiers, and it&#8217;s a matter of pulling together forces to relieve the 1st AD.

Indeed, when he visited 1st AD bases last week, Gen. Richard Meyers, chairman of the Joint Chiefs of Staff, didn&#8217;t rule out the possibility the 1st AD may be extended a second time if the Iraq situation deteriorated.

Part of the reason the 1st AD was first extended was that the Pentagon&#8217;s decision to add forces in Iraq after increasing attacks by Sunni insurgents in Fallujah, Baghdad and other parts of Iraq. Then, Muqtada al-Sadr&#8217;s Shiite militia began battling U.S. forces in the Shiite holy cities of Najaf and Karbala.

The 2nd Infantry Division was supposed to transfer to Iraq from South Korea in time to relieve the 1st AD, but that plan has changed, according to media reports. Now, elements of the Fort Drum, N.Y.-based 10th Mountain Division and two Marine Brigades will replace the 1st AD.

Other spouses said they were disappointed and frustrated by the first extension, but understood the circumstances.

&#8220;He talked to wives in town halls, and he told us flat out what the situation was and gave us specific information,&#8221; said Charlene Thompson, whose husband, Spc. Archie Thompson, is assigned to the 1st Battalion, 6th Infantry Regiment. &#8220;He even gave us his e-mail address if we had problems. He helped a lot!&#8221;