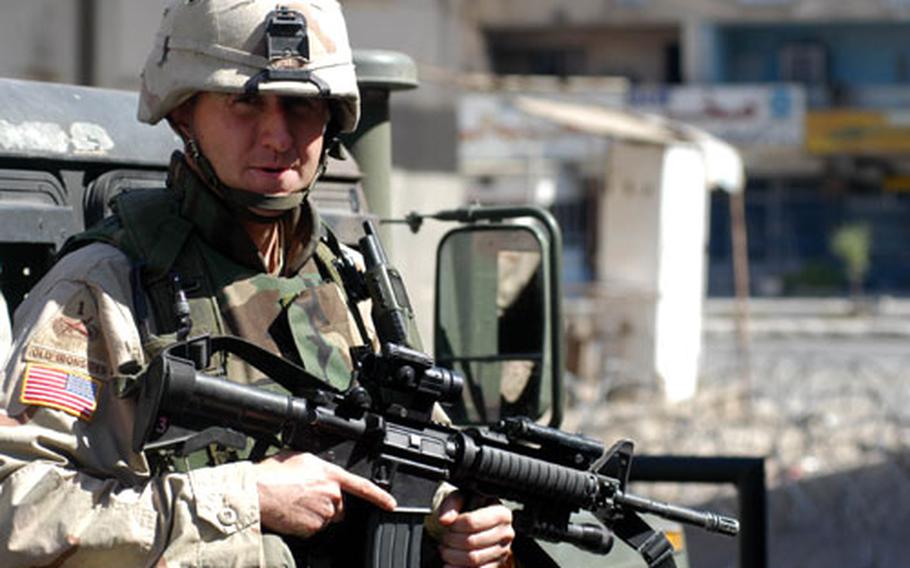 Atop a humvee, Spc. Joshua Crawford, of the Germany-based 1st Armored Division, keeps watch on an alley leading into al-Sadoon street in Baghdad on Friday morning. (Michael Abrams / S&S) 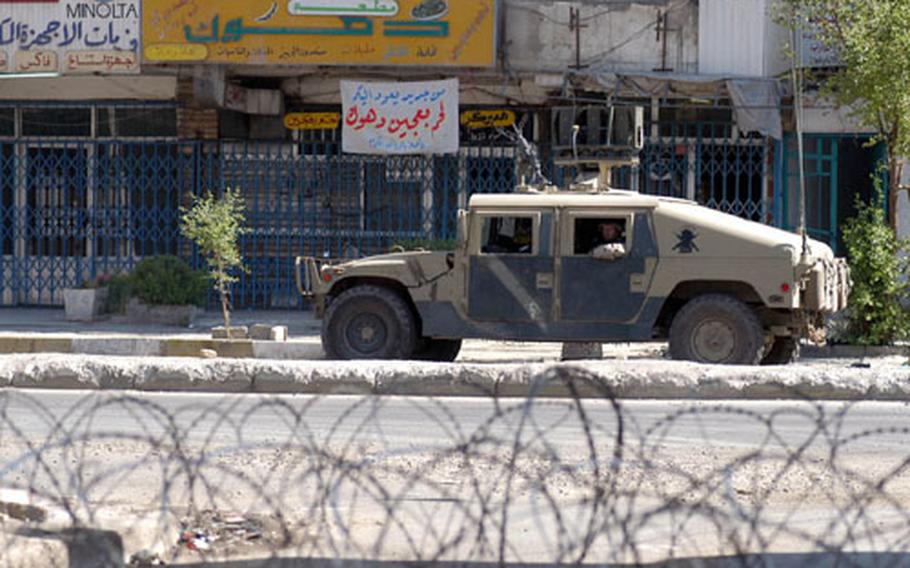 An American humvee with loudspeakers mounted on top of it drives down Al-Sadoon street in Baghdad on Friday morning, warning Iraqis to stay off the street, and that anyone seen with weapons will be shot. (Michael Abrams / S&S)

BAGHDAD &#8212; They stood guard up on the rooftops and down on Al-Sadoon Street, where a loudspeaker-equipped Humvee rolled by with a message in Arabic: Please stay away; anyone with a gun would be shot on sight.

Soldiers from the 1st Armored Division spent the first day after they&#8217;d learned they could be staying in Iraq for at least four more months working to prevent a demonstration they&#8217;d heard could turn violent.

The anniversary of the fall of Baghdad &#8212; exactly one year after Iraqi crowds cheered U.S. soldiers as Iraqis tore down the statue of Saddam Hussein &#8212; was an unusually tense day, with trouble and its portents all around.

Areas near the former Paradise Square, now called Protest Circle, were blocked off for the first time since the Baghdad Hotel was car-bombed about three months ago. Members of the 1st AD in Humvees, tanks and Bradleys patrolled the perimeter.

In the heat of the day, the 1st AD soldiers, who have been the U.S. military stalwart in Baghdad from the beginning, kept guard.

While Department of Defense and U.S. Central Command leaders have said this week that additional troops may be needed in Iraq, no official announcement has come down that the 1st Armored Division will stay. Delaying the return of 1st AD soldiers is only one of many possible plans, military officials said this week.

However, 1st AD troops say they are ready for the delay.

Some soldiers interviewed seemed proud that the burden could, in part, fall on them.

Torres said his mother knew of his extension, from the news, before he did.

Staff Sgt. Ray Vejar was on the roof of the Palestine Hotel, waiting and watching &#8220;for something to happen, basically,&#8221; he said.

Vejar has a wife and three children all awaiting his return, and he had a practical response to the delay.

Fields said his soldiers were taking the news well and staying motivated and willing, even if they weren&#8217;t happy.

Fields said he preferred not to respond to observations that, a year after Baghdad&#8217;s fall, Baghdad seemed as dangerous, or more so, than ever.