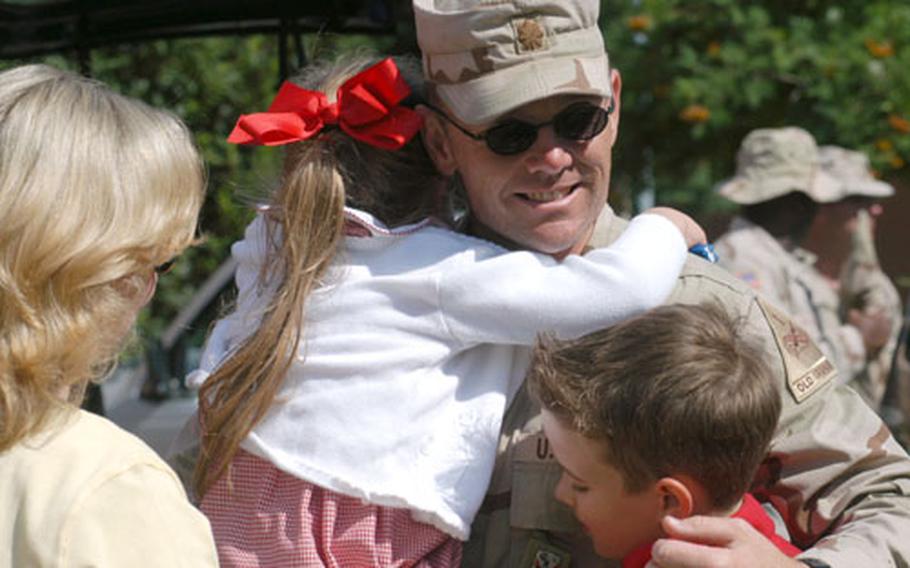 Maj. Donnie Walker, of the 16th Engineer Battalion, gets a welcome-home hug from daughter, Dani, and son, Jordan, as wife, Kirsty, watches at left. About 130 Giessen, Germany, based soldiers arrived home from Iraq on Sunday morning. (Michael Abrams / S&S)

Maj. Donnie Walker, of the 16th Engineer Battalion, gets a welcome-home hug from daughter, Dani, and son, Jordan, as wife, Kirsty, watches at left. About 130 Giessen, Germany, based soldiers arrived home from Iraq on Sunday morning. (Michael Abrams / S&S) 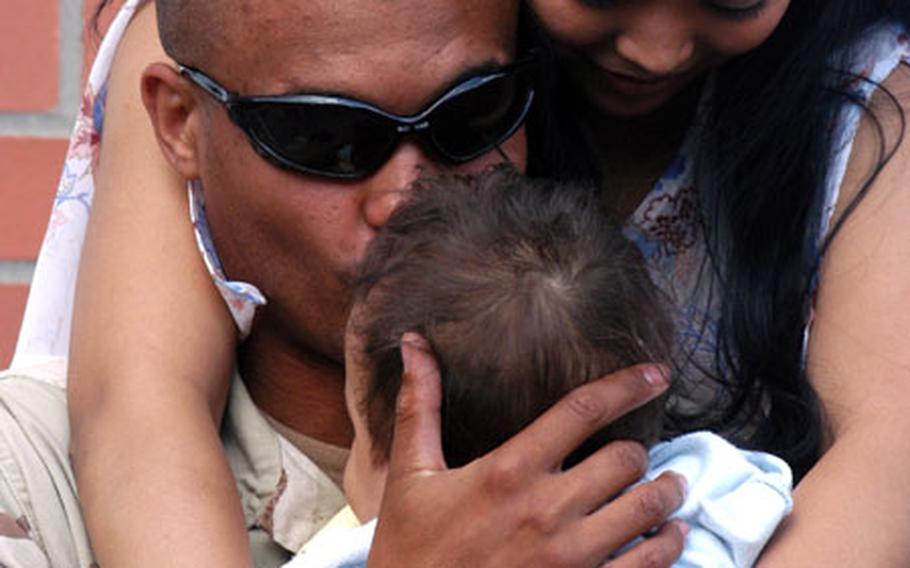 Sgt. Derek Daviage gives 7-month-old son Tyrell, a kiss, while he receives a hug from wife Pag-Ibig, after his return home from Iraq. About 130 Giessen, Germany, based soldiers were welcomed home by family and friends on Sunday morning. (Michael Abrams / S&S)

GIESSEN, Germany &#8212; There were puppies and babies and flags and balloons. And whenever they heard the sound of an approaching engine, the waiting wives would scream.

They were like yesteryear teens, fainting for the Beatles.

The stars they waited for, though, were much dearer: After 15 months of serving in Iraq, about 130 soldiers from the 1st Armored Division&#8217;s 16th Engineer Battalion arrived home in Giessen on Sunday.

Many had been home on leave during the war, but their deployment had also been extended three extra months beyond the expected year. That made it made a long wait for everyone.

It was a long, long, wait for Tina Banister.

She and her husband, 1st Lt. Tim Banister, married in December 2002. They moved to Germany in February 2003. He went off to war in April. Their baby girl, Rebekah, was born last December.

Banister didn&#8217;t always welcome the sound of engines. While her lieutenant was away, she worried a car would pull up and men in uniforms would come out and tell her terrible news. She had lost a husband five years ago to a motorcycle accident. She met Tim at a Christian bookstore while searching for a guide on how to deal with losing a husband.

She found one. She found him.

Her friend, Kristy Walker, had worried for other reasons.

When the Pentagon extended the 1st Armored Division&#8217;s Iraq tour, their fears peaked.

She saw her husband when he took leave and visited her in Michigan. &#8220;We made a baby,&#8221; she said, now seven months pregnant. The couple has been together only two months over the past two years.

Dogs strained on leashes and scrapped, children threw footballs in the sun. After hours of waiting and guessing and rumors about arrival times, the shuffle of boots on asphalt arrived. The soldiers were dropped off around a corner, and nobody had seen it. So the families&#8217; first glimpse of their loved ones was that of them helmeted and marching, rifles jutting.

Some of the wives screamed.

Some of the soldiers, though, would be alone.

Sgt. Matt Sturos was one of those singles, glad simply to be back and in one piece.

Meanwhile, the couples matched up. Spc. Peter Woodruff walked up to his pregnant Teresa, patting her on the stomach. Soldiers milled or turned in weapons. Kids yelped and scattered. The smallest ones climbed up their fathers and held on tight, like koalas to trees.

Out of the joyful racket walked 1st Lt. Banister. Safe. Smiling. He paced straight ahead, on a mission, beyond distraction. He saw only his wife, Tina, his new floppy-hatted baby girl in her arms.

They hugged. They stayed that way for a long time.