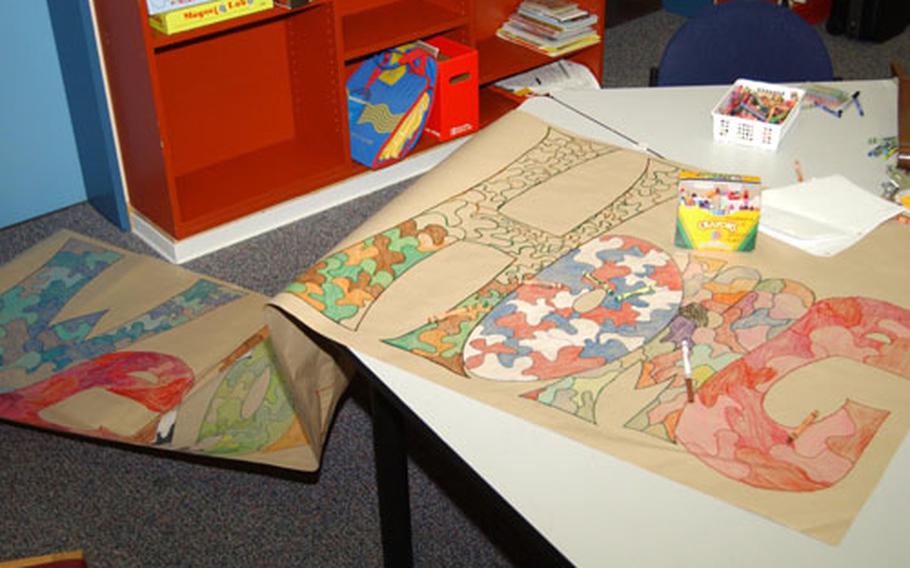 A welcome home banner lies unfinished in the library at Bad Nauheim Elementary School. The banner and others had been prepared by students in anticipation of next month&#39;s return of 1st Armored Division troops. (Lisa Horn / S&S)

A welcome home banner lies unfinished in the library at Bad Nauheim Elementary School. The banner and others had been prepared by students in anticipation of next month&#39;s return of 1st Armored Division troops. (Lisa Horn / S&S) 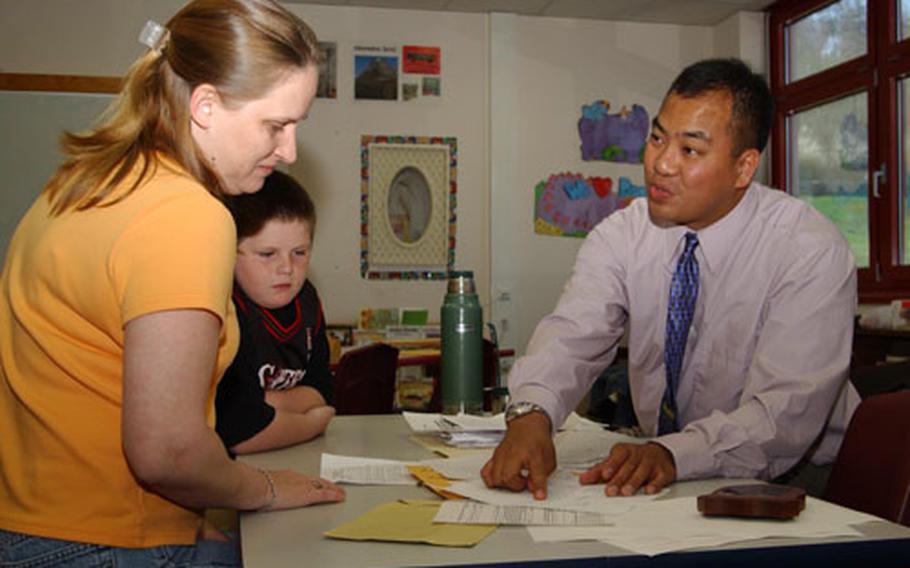 Stephanie Graber and her son, Trevor, listen to third-grade teacher John Tayag, during a parent-teacher conference Friday at Butzbach Elementary School. Graber is the legal guardian of a student in Tayag&#39;s class whose father is deployed with the 1st Armored Division. (Lisa Horn / S&S)

The poster, and other signs made by anxious students at Bad Nauheim and Butzbach elementary schools in Germany, won&#8217;t be going up anytime soon.

The posters were one way children of 1st Armored Division soldiers in the Friedberg community had been preparing for their parents&#8217; homecoming, many of whom were due back in May.

Summer vacations had been planned and many families were simply looking forward to being whole again, said Tawnya Moreno, a 1st AD spouse who works in the Butzbach Elementary School office.

But with the recent announcement of an extension of up to 120 days in Iraq for the 1st AD, those plans have been put on hold.

Schools resumed classes last Monday after the week-long spring break, which has given students a renewed sense of normalcy. The schools&#8217; principals hope to capitalize on that in the coming weeks.

&#8220;Basically, we are focusing on just keeping the kids engaged, focusing on their schoolwork and concentrating on what&#8217;s going on within this building,&#8221; said Bad Neuheim principal Charlie Ragland, who added that 85 percent of the school&#8217;s pupils have at least one parent deployed.

Both schools have crisis intervention groups and have recently implemented student support teams, made up of teachers, guidance counselors, school nurses and psychologists.

While crisis intervention teams are designed to address issues that have a serious emotional impact on the school population, be it the death of a student, a teacher or other tragedy, the student support teams focus on the individual student.

A child referred to the team with behavioral or academic problems may also have a deployed parent.

While troops downrange may be experiencing burnout, spouses on the homefront are suffering a similar kind of exhaustion, which can be impossible to ignore.

And for the many children whose dads are gone, a whole new issue emerges in Friedberg and other 1st AD communities &#8212; the lack of male role models.

&#8220;What I have found to be increasingly difficult is being a surrogate father to 300 some children,&#8221; said Markway, who spends his lunch visiting students in the cafeteria. &#8220;There are not a lot of male resources in this community for kids to turn to.&#8221;