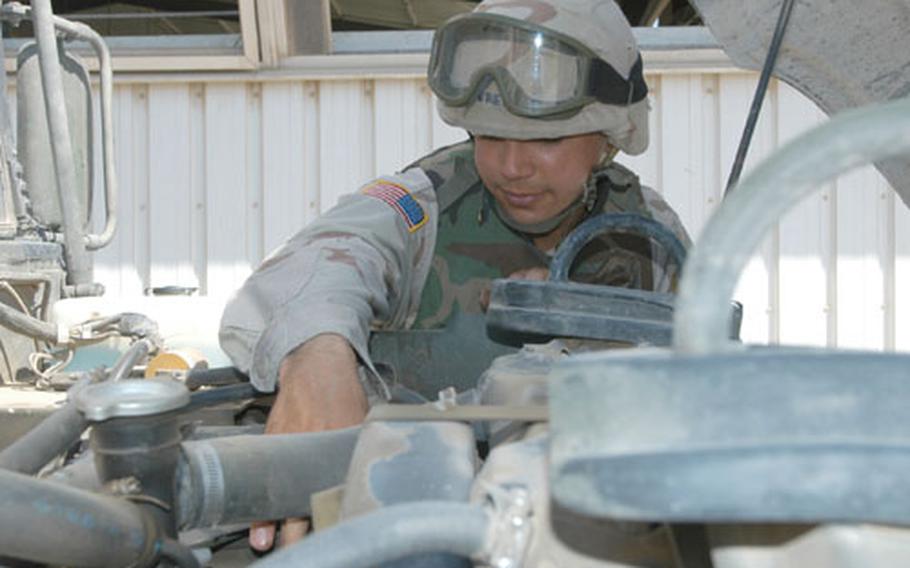 Spc. Yavel Pereira, Headquarters and Headquarters Company, 1st Battalion, 501st Aviation Regiment, checks fluid levels on his Humvee Friday. Vehicle operators have done frequent and regular maintenance on the vehicles in the weeks leading up to the unit&#39;s convoy from Baghdad to Kuwait as they head they to head their home stations in Germany. (Rick Emert / S&S)

BAGHDAD &#8212; For many 1st Armored Division soldiers, the journey home to Germany starts with a 400-mile convoy from Baghdad to Kuwait.

And as those troops start rolling out of the Iraqi capital this week, the last thing 1st AD leaders want is soldiers sitting in broken-down vehicles on the side of the road. To prevent this from happening, units are preparing vehicles and soldiers for the hazardous two-day convoys in which they will face heat, harsh terrain and, very likely, insurgent attacks.

Vehicle operations and unit mechanics have inspected each vehicle several times in the weeks leading up to the convoy, said Command Sgt. Maj. Russell Sadler, the top noncommissioned officer for the 4th Brigade Combat Team. Any problems must be fixed before the vehicle can take its place in the convoy line.

Once on the road, the convoy &#8212; typically about 40 vehicles &#8212; is self-sustaining, with enough mechanics, vehicle parts and ammunition to overcome any obstacles, Sadler said.

As the soldiers meticulously prepare their vehicles for the trek, leaders are preparing the soldiers for anything from heat injuries to roadside attacks.

A convoy that left Thursday evening received indirect mortar and small-arms fire, Sadler said. The vehicles were instructed to return fire and push through without stopping.

There were no injuries and no major damage to the vehicles during the attack on Thursday, Sadler said.

Division leaders would not reveal the location of the attack, or the route itself, because it could endanger soldiers who will take the convoy route in the days to come.

The soldiers are taking the training, much of which comes in the form of briefings from their leaders, very seriously. The training also includes putting soldiers in their vehicles and reacting to scenarios, such as being hit by mortar rounds.

The training and maintenance means some extra work for the 1st AD soldiers, who are finally seeing their deployment come to an end after nearly 15 months.