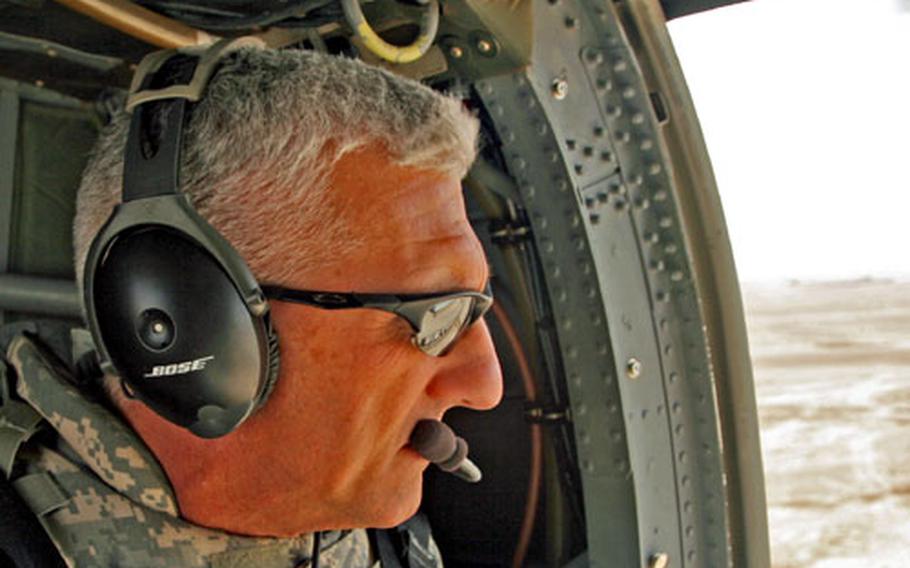 Maj. Gen. Mark Hertling looks out at the northern Iraqi desert during a flight Tuesday from Contigency Operating Base Speicher to a U.S. outpost near Samarra. Hertling, the commander of the 1st Armored Division, took command last month of U.S. forces in northern Iraq. (Drew Brown/Stripes / S&S)

TIKRIT, Iraq &#8212; The top U.S. commander in northern Iraq said he believes that al-Qaida has been disrupted severely enough that coalition forces can now focus more on helping improve the Iraqi government and economy.

Maj. Gen. Mark Hertling, who took command of Multi-National Division &#8211; North last month, said he believes the war in Iraq has reached a turning point and sees a chance for significant progress during the next 12 months.

Hertling declined to discuss the possibility of a Turkish cross-border incursion in detail. The issue is being addressed through diplomatic channels, &#8220;which is exactly where it should be right now,&#8221; he said. Turkey has threatened to send troops into Kurdistan to clean out Kurdish rebels who have staged cross-border attacks.

Hertling, who served as assistant 1st Armored Division commander in Baghdad and southern Iraq in 2003 and 2004, said he also sees a &#8220;real inner feeling of hope&#8221; among Iraqis for the future of their country, unlike the uncertainty and despair he encountered before.

His area of responsibility encompasses nine provinces, two of which are under Kurdish regional control, and five of nine key Iraqi cities &#8212; Mosul, Kirkuk, Tikrit, Samarra, and Baqouba.

The region is the most ethnically and culturally diverse section of Iraq, and violence, while steady in the last four years, has spiked as insurgents were driven out of Baghdad and surrounding areas by the U.S. troop &#8220;surge.&#8221;

Key issues, such as the final status of Kirkuk, an important oil-producing city, have yet to be decided. Kirkuk residents are slated to choose by the end of the year to either join the Kurdistan semiautonomous region or remain part of Iraq.

But the surge of 30,000 additional U.S. troops into Iraq, which was completed in July, has driven down violence across the country.

While many U.S. commanders in Iraq say the surge has succeeded, Hertling said the Iraqi army deserves a great deal of credit for helping bring stability to areas that are outside U.S. control.

About 90 percent of the operations that U.S. forces in northern Iraq carry out are conducted with the Iraqi army, Hertling said. Iraqi forces have also shown an increasing ability and willingness to conduct independent operations, he said.

&#8220;The Iraqi army has gotten to the point where they realize that the army is a nationalistic organization, and that if Iraq is going to survive, then it&#8217;s going to rest on their shoulders,&#8221; Hertling said.

Aside from security, U.S. forces face significant challenges in getting government organizations working properly and getting people back to work, Hertling said.

In recent months, as violence subsided, U.S. forces have been focused more on what Hertling called &#8220;helicopter governance&#8221; &#8212; shuttling local officials back and forth from the provinces to Baghdad to &#8220;force (local) issues.&#8221;

The effort has resulted in some improvements in the budget process and has focused the attention of the national government on some provincial issues, Hertling said. But there is still a lack of coordination on many key issues.

For example, a regional energy conference this week drew many high-level U.S. officials from the State Department and military, but the Iraqis in attendance were mostly low-level functionaries. The ministries of Oil, Interior and Defense all failed to send representatives.

Unemployment ranges from 30 percent &#8220;in the best of areas&#8221; to 90 percent in others. Security concerns and infrastructure problems represent significant hurdles to putting people to work, Hertling said.

Despite the wide range of problems in his region, Hertling said he is bullish on Iraq&#8217;s future.