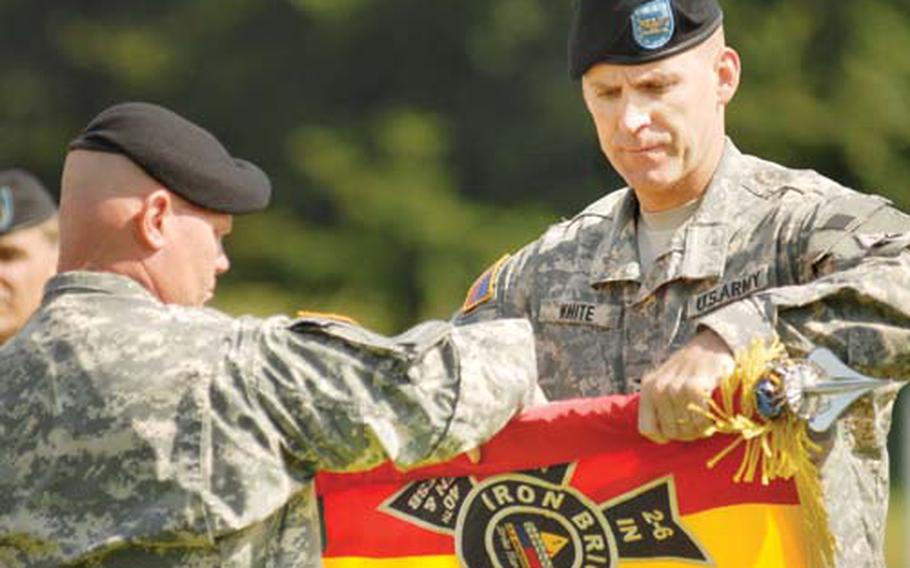 Col. Pat White, right, 2nd Brigade Combat Team commander, and the brigade’s Command Sgt. Maj. Michael Eyer case the flag of their unit during a reflagging ceremony Wednesday in Baumholder. During the ceremony, White relinquished command of the 2nd BCT, which is being replaced by the 170th Infantry Brigade. (Ben Bloker / S&S)

BAUMHOLDER, Germany &#8212; The soldiers of U.S. Army Garrison Baumholder were given a new name and patch Wednesday.

The 2nd Brigade Combat Team, 1st Armored Division closed shop and then rose again as the 170th Infantry Brigade. The new unit, redesignated as part of the Army&#8217;s ongoing transformation process, will be part of V Corps.

"Our mission is to prepare this brigade for whatever will be next," said Gen. Carter Ham, commander of U.S. Army Europe. "The plan is for them to go back. That&#8217;s something that, as you know, I would like to see changed."

Ham has said before that he would like the brigade to stay in Baumholder, as well as the 172nd Infantry Brigade to stay in Schweinfurt. On Wednesday, Col. Patrick Matlock took the helm of the newly reflagged brigade.

Known as "The Bayonet Brigade," the 170th patch features a black bayonet against two shades of light and dark blue.

It was bittersweet for some to relinquish their identity as "Old Ironsides," America&#8217;s tank division. The 2nd BCT, 1st AD dates back to World War II, where the unit defeated Erwin Rommel&#8217;s veteran Africa Corps. It has been part of most major conflicts since then, including Operation Desert Storm, Kosovo and peacekeeping operations in Bosnia and Herzegovina.

Soldiers from the 2nd BCT have deployed to Iraq three times, and 60 have died since the start of Operation Iraqi Freedom in 2003.