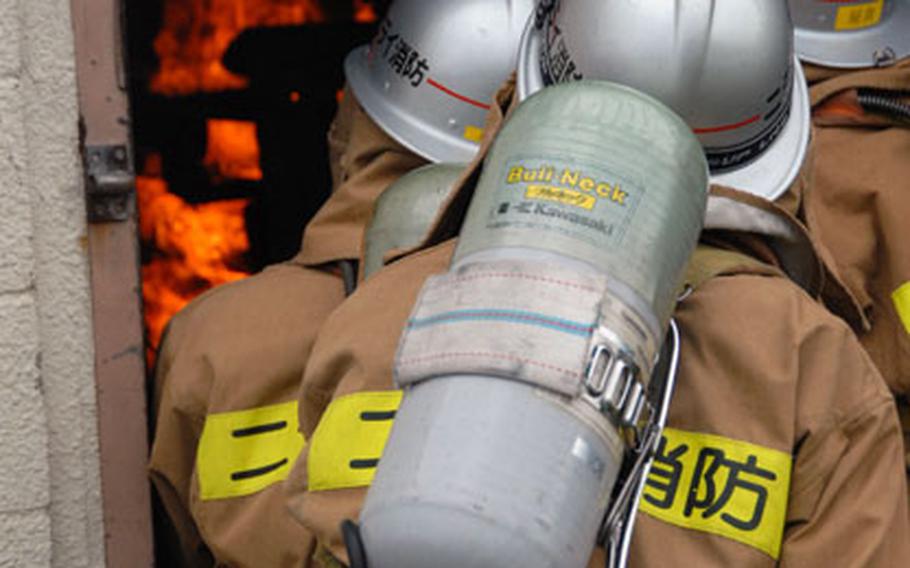 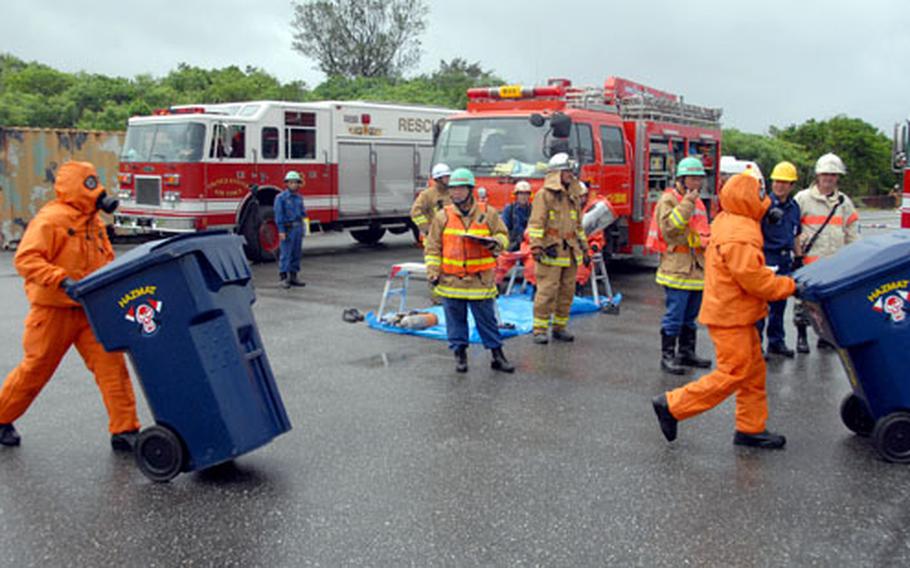 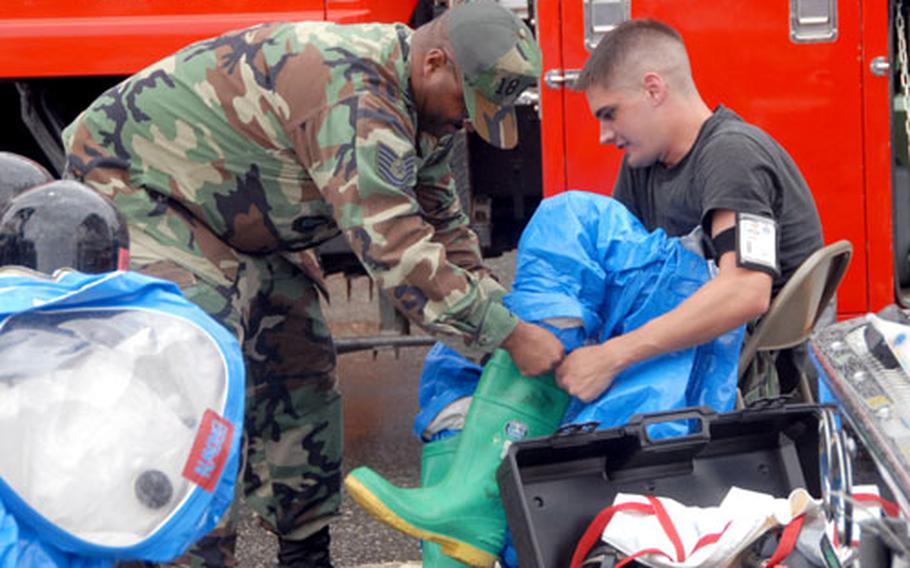 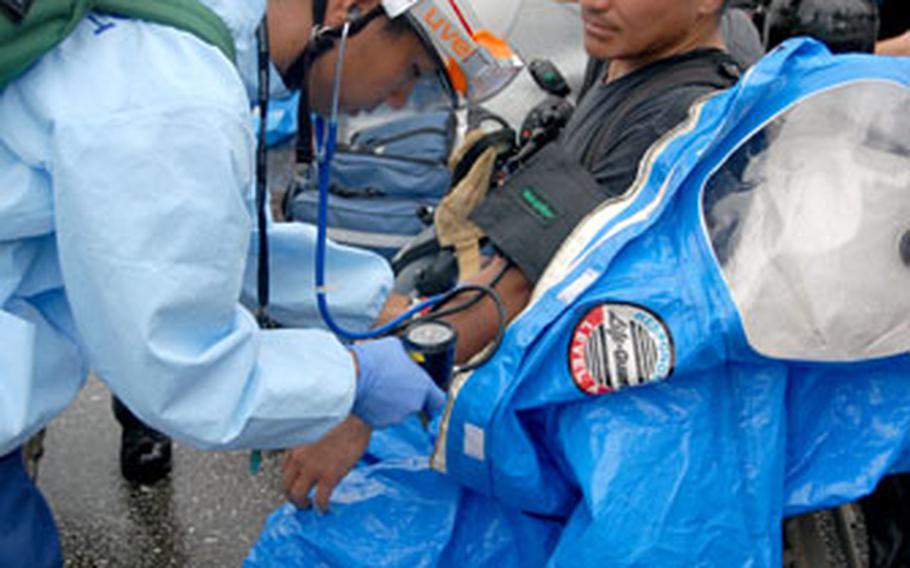 A medic with the Nirai Fire Department takes the vitals of a firefighter preparing to put on a hazmat suit Friday. (Megan McCloskey / S&S) 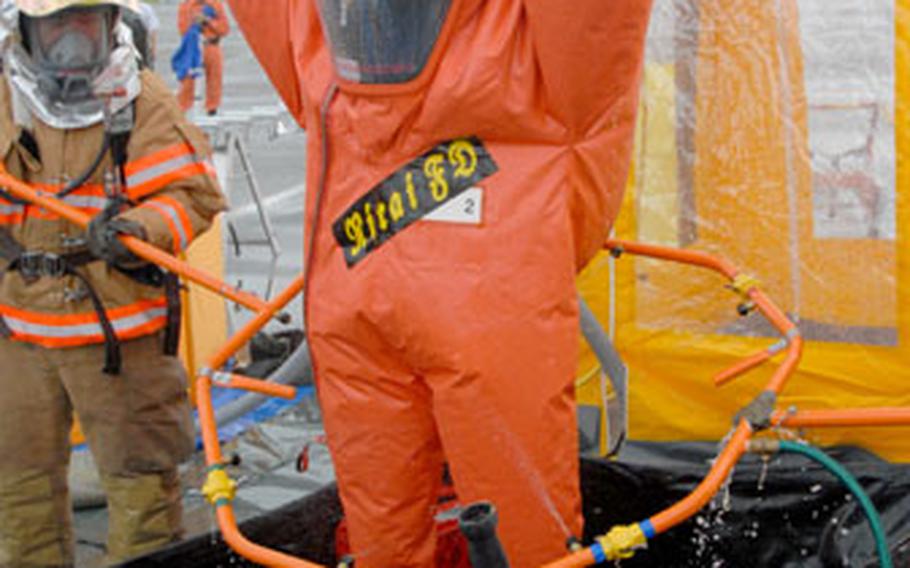 An emergency responder with Nirai Fire Department gets washed down Friday during the decontamination process after cleaning up “hazardous” material at a joint training exercise at Kadena Air Base. (Megan McCloskey / S&S)

KADENA AIR BASE, Okinawa &#8212; With language barriers, different emergency frequencies and varying equipment, responding to an emergency together can be a challenge for the 18th Wing and local Okinawan authorities.

They got some practice at it in Friday&#8217;s joint training exercise for the 18th Civil Engineer Squadron and the Nirai Fire Department involving a downed commercial plane, a burning building and a hazardous chemical spill.

The two signed a mutual assistance agreement in 2004 saying that, upon request, they would help each other during emergencies. Since then, they&#8217;ve held joint exercises to figure out how they would do that.

This year, the three mock incidents occurred simultaneously so the participants could learn how to divvy up tasks efficiently in a situation that has multiple factors, according to Nirai fire chief Masanori Chibana.

Kadena was assigned to handle the plane fire, which was quickly extinguished with the use of two water trucks that sprayed high-power streams.

Nirai, which provides emergency response for the cities surrounding the air base, such as Kadena town and Okinawa city, handled the burning building.

The two worked together on the hazmat spill &#8212; a situation that requires advance planning. For example, each group has to know and work around the fact that the other has its own emergency radio frequency, which has been a problem in the past, Kadena spokesman Johnathan Monroe said.

There&#8217;s also the issue of not speaking the same language.