18th CSB returns from Iraq with tales of salsa and survival 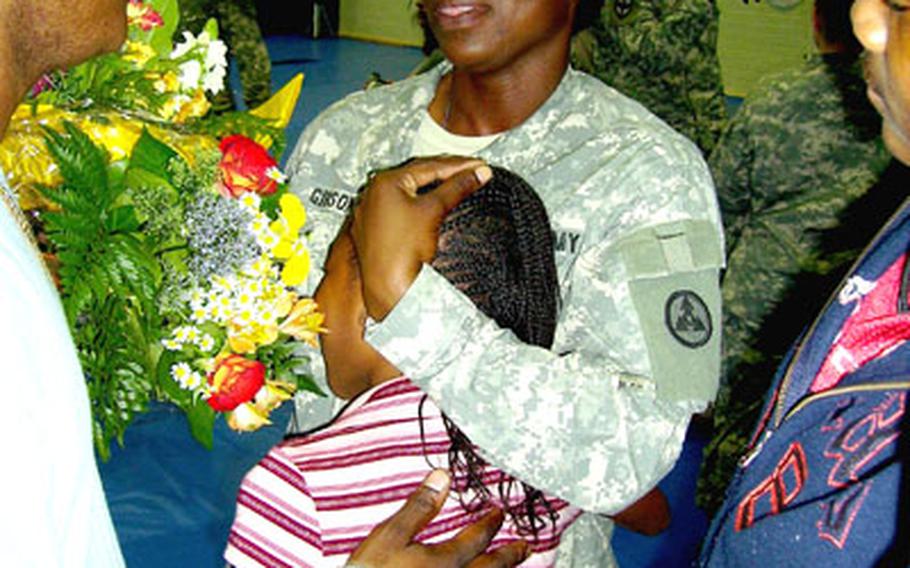 Staff Sgt. Tiffany Gibson of the 18th Combat Support Battalion is welcomed home after a year in Iraq on Friday by her husband, Michael, and 10-year-old daughter, Michaela. Her 14-year-old son, Aquan, was also on hand. (Seth Robson / S&S)

GRAFENW&#214;HR, Germany &#8212; When they weren&#8217;t dodging rockets and roadside bombs in Baghdad, soldiers from the 18th Combat Support Battalion danced the salsa.

Salsa classes were one way soldiers from the unit relaxed during down time at their forward operating base at Baghdad International Airport. The classes weren&#8217;t as glamorous as the &#8220;Dancing With The Stars&#8221; television show &#8212; the soldiers danced in their desert camouflage uniforms &#8212; but Cpl. Jonathon Days, 20, of Miami, appears to have caught the dancing bug.

&#8220;I&#8217;m getting better. I want to do a little more practice before I go to Miami,&#8221; said the young intelligence soldier, who is planning 30 days of leave to visit family in his home town next month. Days was one of 60 Headquarters and Headquarters Company, 18th CSB soldiers who arrived home to Grafenw&#246;hr on Friday morning.

Many other soldiers had family waiting for them when they rolled into the Grafenw&#246;hr Field House at 3:30 a.m.

Grafenw&#246;hr commissary supervisor Michael Gibson, 30, clutched a bouquet of flowers as he waited for his wife, Staff Sgt. Tiffany Gibson, 32. Beside him, their 10-year-old daughter, Michaela, and 14-year-old son, Aquan, were excited to see their mom after such a long separation.

&#8220;It has been a job. Helping them with school work on the telephone because I work nights &#8230; cooking their dinner every day before I go to work so they have something to eat when they get home &#8230; making sure they have fresh, clean laundry,&#8221; Michael Gibson said.

The Gibsons rushed together to hug after the soldiers finished a brief ceremony in the field house.

The family said they might plan a trip to Garmisch or the States later this month. Michaela said she&#8217;s looking forward to taking her mom to the Steak on the Stone restaurant near Bamberg.

Although convoys of 18th CSB vehicles were hit by roadside bombs many times, none of its soldiers was killed in action, and only a few suffered minor injuries, he said.