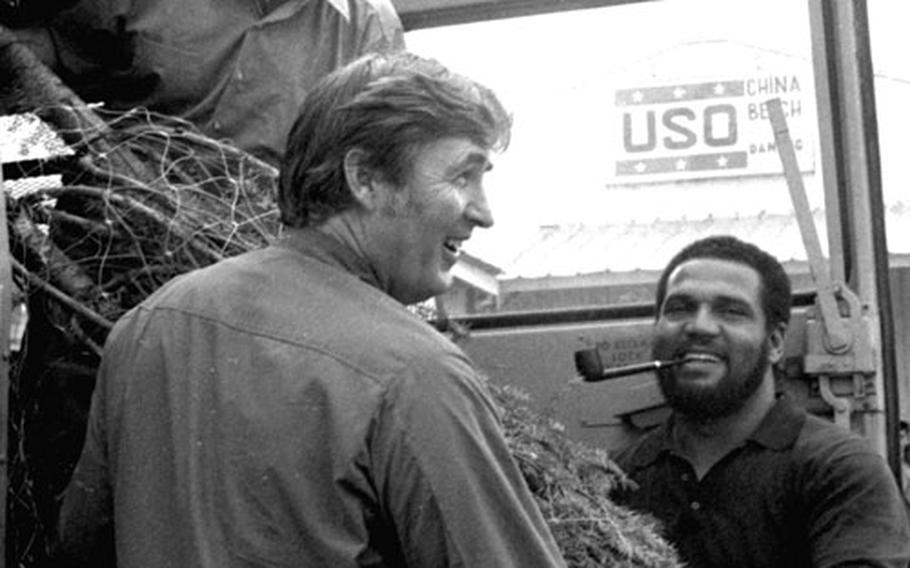 World Airways President Edward J. Daly, top, actor Fess Parker, left, and China Beach USO Director Mike Ford help unload Christmas trees and turkeys at Da Nang. On his flight home a few days later, Daly brought along 183 servicemembers on holiday leave. In 1975, he was in the headlines for his unauthorized efforts to fly children out of South Vietnam before the communist takeover. (Howard Lavick/Stars and Stripes)

World Airways President Edward J. Daly, top, actor Fess Parker, left, and China Beach USO Director Mike Ford help unload Christmas trees and turkeys at Da Nang. On his flight home a few days later, Daly brought along 183 servicemembers on holiday leave. In 1975, he was in the headlines for his unauthorized efforts to fly children out of South Vietnam before the communist takeover. (Howard Lavick/Stars and Stripes) 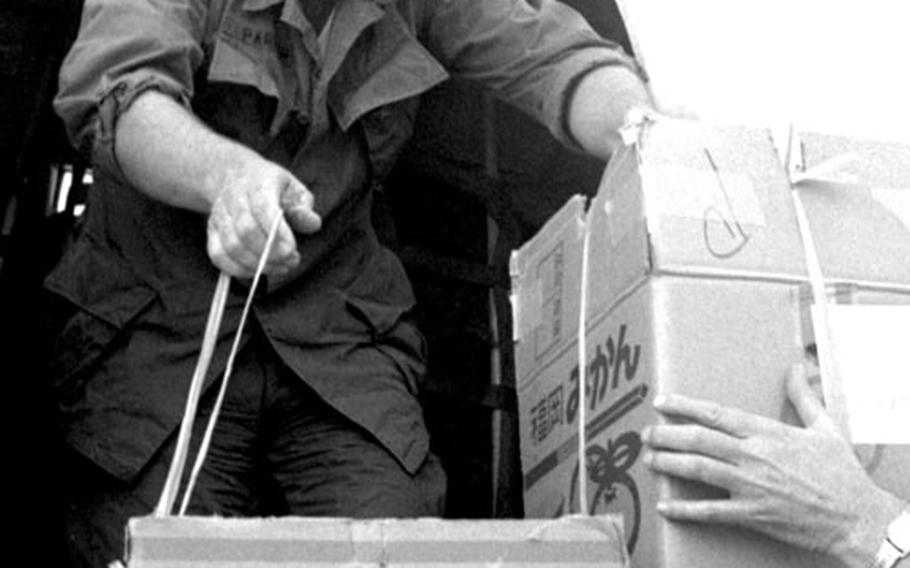 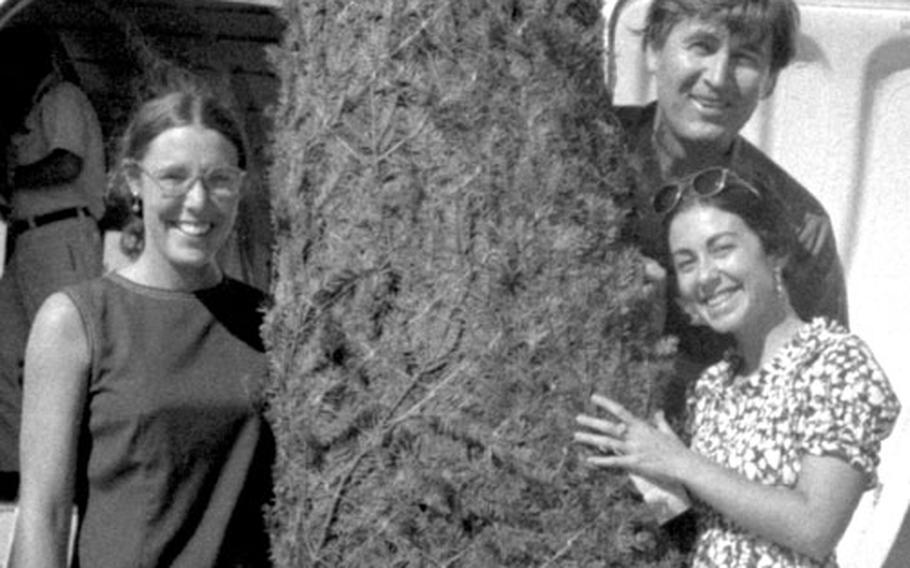 Fess Parker peers out from behind a Christmas tree as he poses with Renee Loustounau, left, and Diane Pellegrino of the Chu Lai USO. (Howard Lavick/Stars and Stripes) 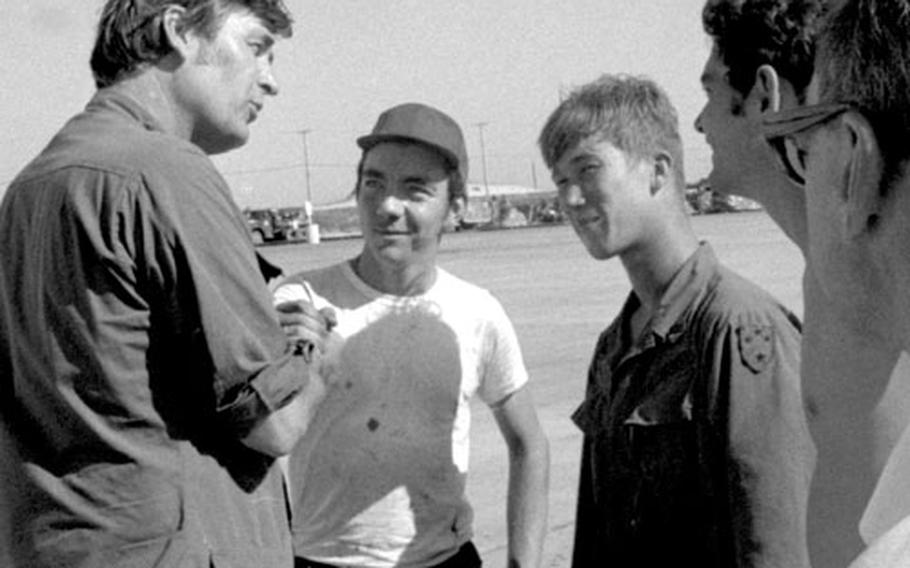 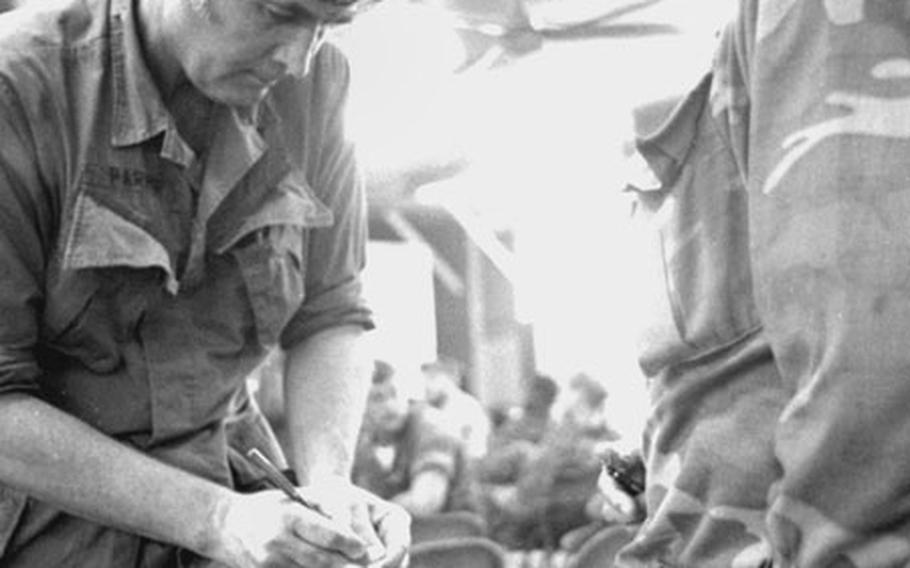 This marked the first flight under a joint World Airways-USO program "Homecoming — USA" which offers Vietnam servicemen round trip flights to Oakland for $350.

World Airways President Edward J. Daly was on hand to talk with the servicemen in the upstairs lounge of the civil air terminal where refreshments, music and a place to relax had been reserved.

Daly, with a small group of airline and USO officials along with TV star Fess Parker, visited USOs in five areas of the war zone to distribute Christmas trees and turkeys earlier in the week. Parker, a close friend of Daly's, was making his second trip to Vietnam.

As recorded Christmas carols played gently in the background, the men sat talking, playing cards or merely thinking about surprising their families by being home for Christmas.

"My wife knows I'm coming home," said Spec. 4 Wes Byrd of St. Louis, Mo., "but she won't be expecting me so soon." Byrd, like many other servicemen, applied for his two-week leave before learning about the chartered flights at reduced rates. After reserving space on the chartered commercial flights, the servicemen had their leave orders amended so they would start their leaves on the day of the flight

Although the processing at Tan Son Nhut went smoothly, many servicemen encountered difficulties in getting from their units to Saigon.

Forty GIs from Phu Bai, seven miles southeast of Hue, were stranded for 24 hours before finally getting a flight to Cam Ranh Bay. They then had to take a cargo flight to Saigon.

The main problem stemmed from the confusion surrounding the new MACV 13-day leave policy. Many units out in the field learned of the new policy before they received the detailed procedural regulations on it.

The problem of giving the line units out in the field a chance to reserve flights home has been handled well in Military Region I, according to Dick Silva, sales manager for World Airways.

"The reservation operation here has gone more smoothly than in any of the other areas," he said.

Unlike the other military regions, where a serviceman works individually through the nearest USO, in MR I, the GI goes directly to his commanding officer with his ticket money and request for leave. The commander then consolidates his unit's requests and takes them to the Da Nang USO where the reservations are made.

"This is not a first come, first served basis," Silva emphasized. "All seats on the flights will be allocated on an allotment basis. We want to make sure the GIs in the field can get tickets," he said.

The problem of obtaining tickets is not limited to enlisted personnel alone. Lt. Col.. Patrick R. Lowrey of the 25th Inf. Div. at Camp Frenzel Jones, had his "tale of woe" as well.

Lowrey made a trip to Tan Son Nhut to get his ticket reservation, but was too late to get on the flight he desired. He then had to make two trips to the downtown Saigon USO before finally getting his reservation. "I took a ticket number when I entered the USO and had to wait in line until my number was called," Lowrey said. "I was number 130 out of the 183 seats available. Altogether it took eight hours before I finally made my reservation. They went strictly by number. Rank wasn't involved," he laughed.

But despite the problems, all 183 men were processed and ready to go well before the 1:20 p.m. loading time. As the World Airways Boeing 707 rolled up to the loading area, a GI excitedly whispered, "There she is ..." saying it almost with a reverence usually reserved for Raquel Welch or Brigitte Bardot.

"You fellows are really anxious," Daly said as the GIs started rushing toward the loading gate.

"We ain't left yet?" one GI hollered as he raced out toward the plane where World Airways officials and stewardesses waited to greet him and the others. In the plane, upon each gold-colored seat, the GIs found a Christmas card wishing them a Merry Christmas and a Happy New Year. Fifteen minutes later, and ten minutes early, flight No. 502 was on its way to making that wish a reality.