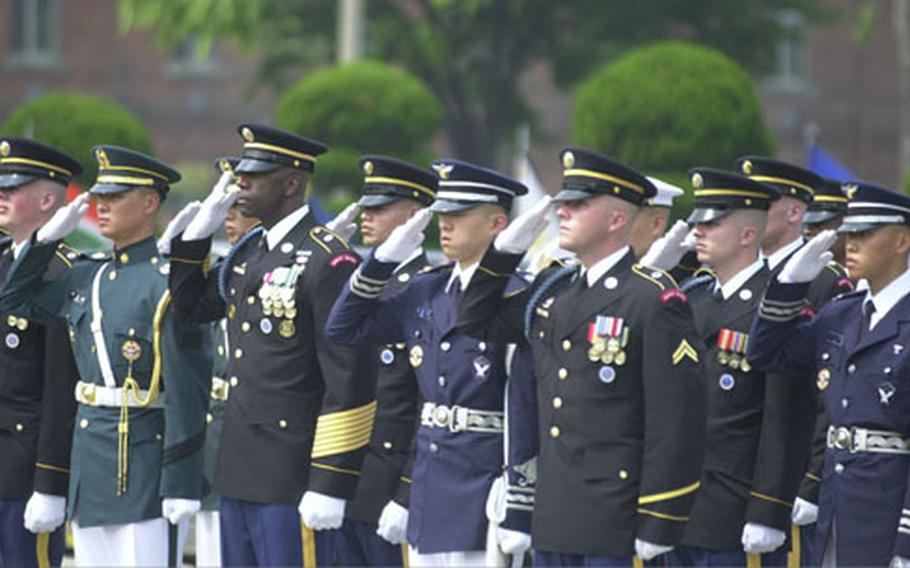 Members of an honor guard salute as taps is played during a Yongsan Garrison repatriation ceremony Thursday. Eighteen sets of remains thought to be those of American soldiers killed in the Korean War were honored. (Joseph Giordono / S&S)

Members of an honor guard salute as taps is played during a Yongsan Garrison repatriation ceremony Thursday. Eighteen sets of remains thought to be those of American soldiers killed in the Korean War were honored. (Joseph Giordono / S&S) 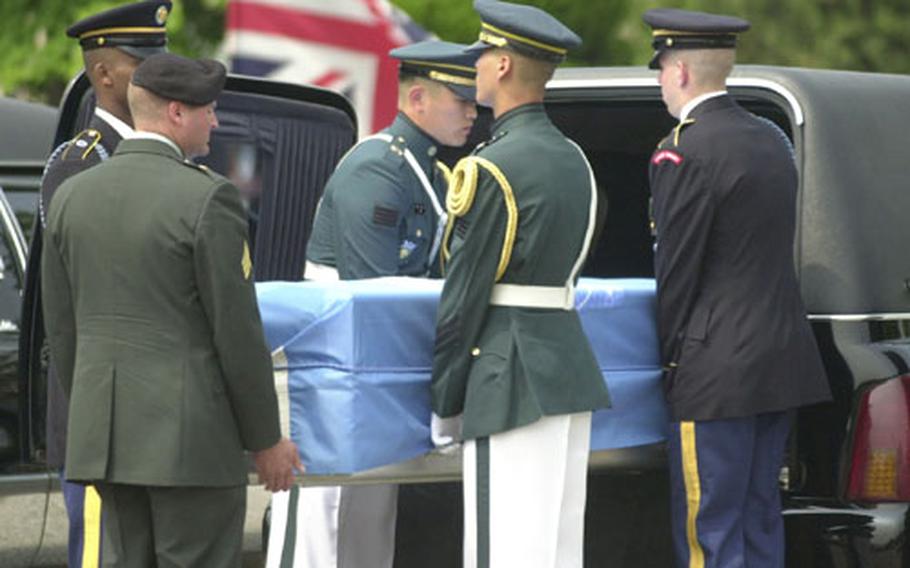 An honor guard places a coffin containing remains thought to be those of an American soldier into a hearse Thursday at a Yongsan Garrison repatriation ceremony. (Joseph Giordono / S&S) 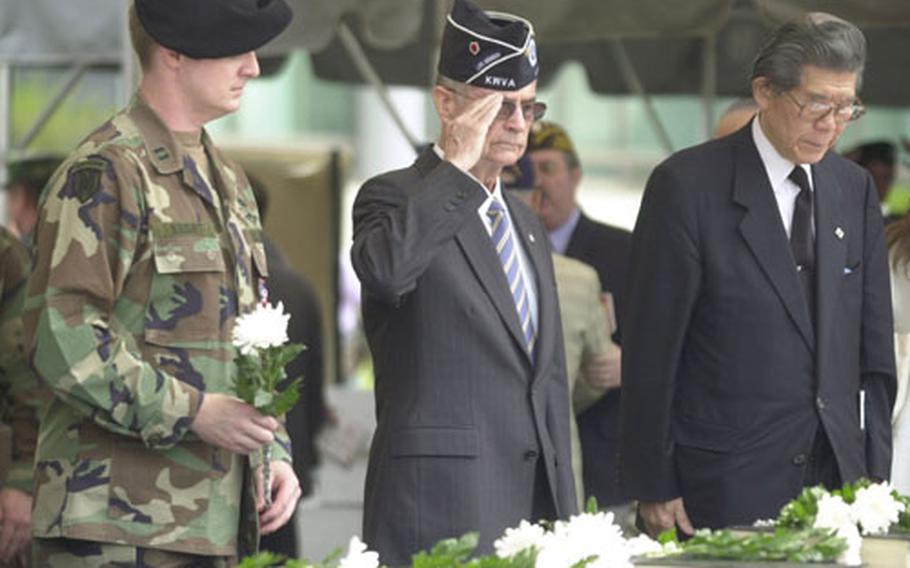 A member of the Korean War Veterans Association and others lay flowers on the remembrance books for soldiers killed in the Korean War. (Joseph Giordono / S&S) 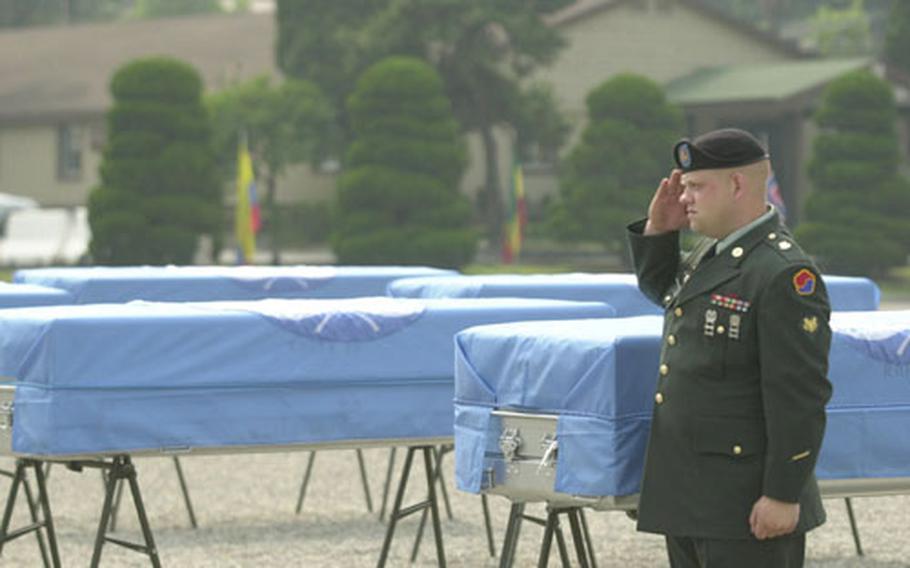 Before a repatriation ceremony Thursday at Yongsan Garrison, a lone American soldier stands and salutes in front of metal coffins carrying remains thought to be those of U.S. soldiers killed in the Korean War. (Joseph Giordono / S&S) 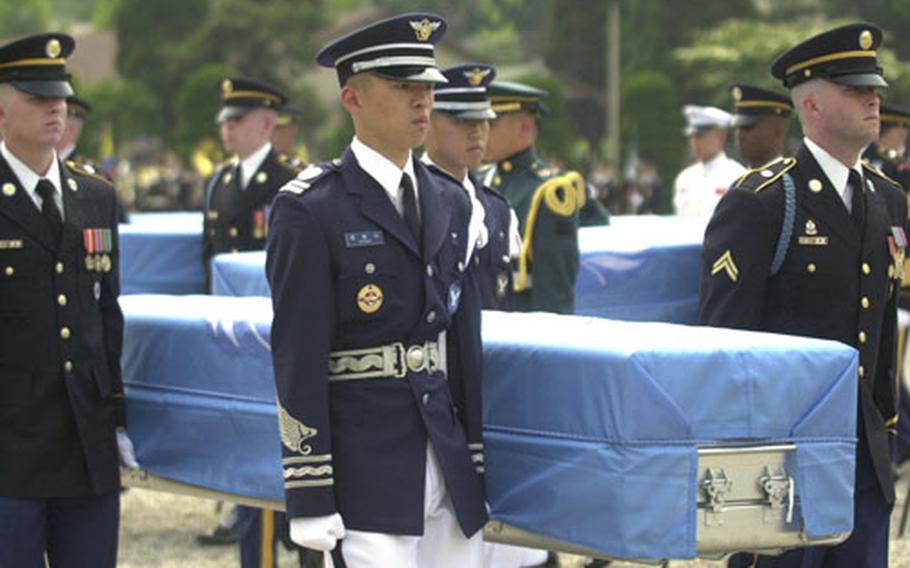 An honor guard carries a casket containing remains thought to be those of an American soldier killed during the Korean War. Eighteen sets of remains were repatriated Thursday at a Yongsan Garrison ceremony. (Joseph Giordono / S&S)

YONGSAN GARRISON, South Korea &#8212; Eighteen sets of remains believed to be those of U.S. soldiers killed in the Korean War were repatriated at an emotional ceremony here Thursday, marking the first time since 1999 remains have been brought directly to South Korea before being sent on to identification labs and waiting families back home.

After a 21-gun salute and the sounding of taps, an honor guard of soldiers in dress uniforms reverently carried the metal caskets &#8212; draped with the light blue United Nations Command flag &#8212; to a waiting row of black hearses.

&#8220;My fellow warriors, today begins your long journey home,&#8221; said Jerry D. Jennings, the deputy assistant secretary of Defense for POW/MIA affairs. &#8220;Your wives, your parents, your children, your comrades and your nation await your return. And now, after more than 50 years, their waiting ends. Now, their time, and your time, has come.

&#8220;It is fitting that the journey home begins in the land that they made free. ... Once again, Americans are returning over land, by much the same route they took when they entered the battle zone.&#8221;

Thursday&#8217;s ceremony was the culmination of years of negotiations with North Korea, officials said, with much prodding and pulling.

&#8220;It has not been without difficulty,&#8221; Jennings said. &#8220;Dedicated specialists of the United Nations Command and the Joint POW/MIA Accounting Command have applied their expertise across the armistice table, across the fields of battle and across the frontiers of science. All to bring us to this point, some nine years after our first recovery operation in the North, and more than 50 years after these brave men fell.&#8221;

The ceremony was attended by representatives from almost every nation that contributed troops to the 22-country United Nations force during the war. They indicated they each had their own reasons to honor the fallen.

&#8220;Victory is achieved through sacrifices. During the days following June 15, 1950, many lives were sacrificed to defend freedom and preserve our way of life,&#8221; said retired Brig. Gen. Lee Chi-op, a legendary South Korean officer of the 26th Infantry, who earned the nickname &#8220;Speedy Lee&#8221; for his Korean War exploits.

Since April, joint U.S.-North Korean teams have been searching near the Chosin Reservoir and in Unsan Country, both sites of major Korean War battles.

The Chosin Reservoir team recovered 12 sets of remains believed to be from the 7th Infantry Division, which fought Chinese troops from November to December 1950. About 1,000 U.S. troops are estimated to have been lost in battles of the Chosin campaign, officials said.

Since 1996, 28 joint operations have been conducted in North Korea, with more than 200 sets of remains recovered. Of the 88,000 U.S. servicemembers missing in action from all conflicts, more than 8,100 are from the Korean War, the Pentagon says.

The remains repatriated Thursday will be taken from South Korea to the Central Identification Laboratory, where dental records and bone analysis will be used to try to confirm identities, officials said.

The process can take from a few months to a few years, a POW/MIA command spokesman said.

During the ceremony, Lt. Gen. Charles C. Campbell, the 8th Army commander, urged today&#8217;s soldiers to take a lesson from those who came before.

&#8220;We pause today to remember their lives and rekindle in our own hearts the fire, the passion that drove them,&#8221; Campbell said. &#8220;Today is a celebration of the lives of patriots who chose to stand and defend freedom.&#8221;

For some, the ceremony was a very personal reminder.

&#8220;Being here today brought back many memories of the war. When I think about these Americans who died for the Korean people, I can only bow my head to them to show respect and honor,&#8221; said Sohn Jung-dan, a spokesman for the Korean War Veterans Association.

&#8220;It has been 54 years since we were attacked by the North. Finally, we are able to pay our respects to these foreign heroes. They came to a land away from their home, to defend people they didn&#8217;t even know.&#8221;