177 3rd ID soldiers proud to be back for another go 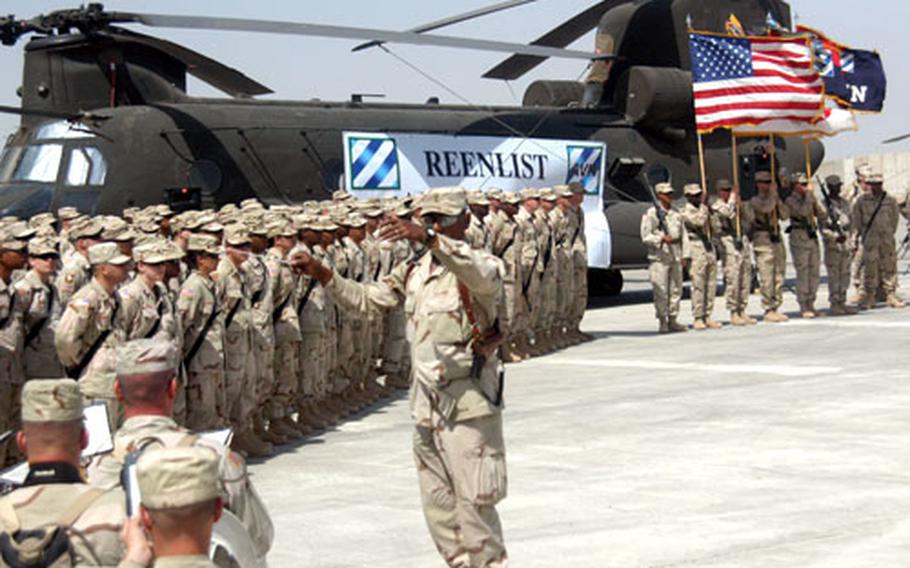 In the largest re-enlistment ceremony ever held in Iraq, 177 soldiers from the 3rd Infantry Division&#39;s Aviation Brigade at Camp Taji pledged a fresh commitment to the Army. (Vince Little / S&S)

CAMP TAJI, Iraq &#8212; With Black Hawk, Chinook and Apache helicopters as a backdrop, 177 soldiers from the 3rd Infantry Division&#8217;s Aviation Brigade pledged a fresh commitment to the Army earlier this month.

The soldiers assembled on the Camp Taji flight line signed up for an additional 990 years of combined service. Gen. Dan K. McNeill, who heads the Forces Command, comprised of all tactical Army units in the continental United States, conducted the proceedings. He was accompanied by Maj. Gen. William G. Webster, the 3rd ID commander.

The 101st Airborne Division had established a previous record of 158 re-enlistees at once in Iraq two years ago, Army officials said. This month&#8217;s event represents the largest mass re-enlistment in the 3rd ID&#8217;s history.

Aviation Brigade soldiers all appeared unfazed by the prospect of an extended U.S. military presence in Iraq. And while the Army as a whole is struggling to meet its recruiting and retention goals, the soldiers who re-enlisted in Iraq had their reasons.

Staff Sgt. Ramon Puchales of Vineland, N.J., the noncommissioned officer in charge of retention for the brigade&#8217;s 1st Battalion, 3rd Aviation Regiment, said he didn&#8217;t have to think twice about turning out Sunday.

The significance of Sunday&#8217;s ceremony wasn&#8217;t lost on Sgt. Annie Rivera of Mounds, Okla., who works in human resources. She said she felt a sense of unit pride.

During Sunday&#8217;s ceremony, the brigade &#8212; currently commanded by Col. Ronald D. Tuggle &#8212; also received the Presidential Unit Citation for its performance in Operation Iraqi Freedom I.

Since arriving at Taji on Feb. 18, the Aviation Brigade has logged about 20,000 hours in Apaches, Black Hawks and Chinooks, said Maj. David Weis, a unit spokesman.