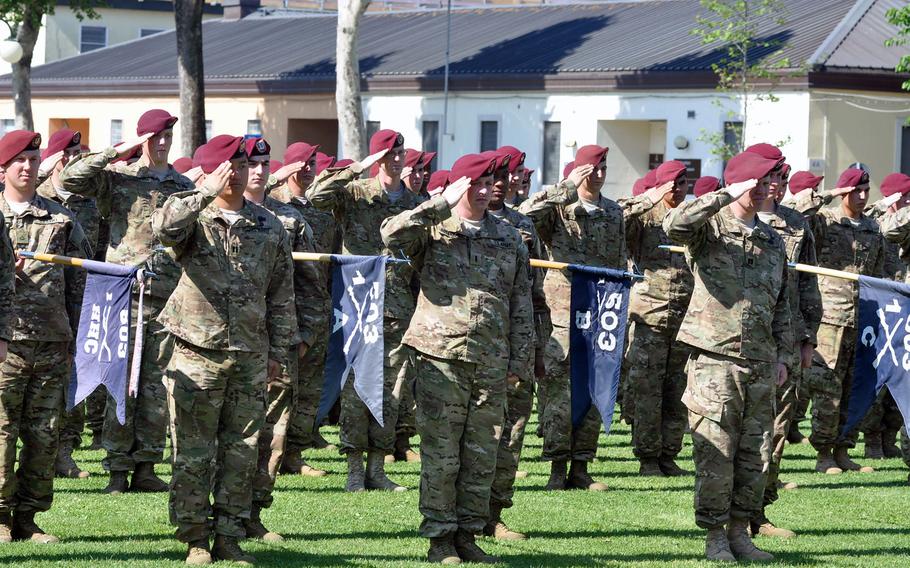 Soldiers from the 173rd Airborne Brigade Combat Team salute during a casing of the colors ceremony at Caserma Ederle in Vicenza, Italy, June 14, 2012, before their deployment to Afghanistan. A unit from the 173rd, Company C, 2nd Battalion, 503rd Infantry Regiment, is going to Cameroon in mid-March to participate in an annual U.S. Army Africa exercise called Central Accord. Kent Harris/Stars and Stripes (Kent Harris/Stars and Stripes)

VICENZA, Italy — For the last decade, the go-to place for the 173rd Airborne Brigade Combat Team was Afghanistan. The brigade deployed there four times, after a 2003 tour in Iraq.

Now, with combat tours ended for the foreseeable future as the U.S. prepares to have all combat troops out of Afghanistan by the end of the year, brigade paratroopers are headed, somewhat unexpectedly, somewhere different.

About 135 paratroopers with Company C, 2nd Battalion, 503rd Infantry Regiment are going to Cameroon, in central Africa. They will be participating starting in mid-March in an annual U.S. Army Africa exercise called Central Accord.

It’s a first for the 173rd, whose soldiers have been busy either deploying to Afghanistan or returning.

“We’ve never done an exercise with USARAF,” said Maj. Mike Weisman, brigade spokesman. “This is the first time it lined up: We’re here and we’re available for training, and USARAF requested us. It’s just kind of a fortunate coincidence.”

The 173rd soldiers, comprising the largest U.S. troop component for the exercise, will spend about 10 days in Cameroon training about 1,100 troops from countries in the region in infantry tactics and procedures, peace support operations and aerial delivery — dropping supplies out of C-130s. Also participating will be the 369th Sustainment Brigade, part of the New York National Guard and known as the “Harlem Hellfighters.”

The exercise is one of several USARAF operations in central Africa, where the command is part of an effort to equip and train to United Nations standards African Union troops participating in a variety of peacekeeping and security operations in the volatile region riven by extreme poverty, disease, political instability, tribal and religious conflict and human rights abuses.

It’s unclear whether the exercise in Cameroon, one of the more stable countries in the region, is the beginning of a beautiful friendship between the 173rd and U.S. Army Africa.

The brigade is headquartered in Vicenza, as is USARAF. But it’s a part of U.S. Army Europe, which had to agree to lend the troops to USARAF.

Weisman said the 173rd aims to be the “unit of choice for any commander around the globe” and is positioned to do it.

“One of the best parts of the 173rd being forward-located in Europe is that we can fill operational needs of other geographical commanders,” he said.

“We’ve got the infrastructure in U.S. Army Europe to move troops and support to AFRICOM or CENTCOM rapidly,” he said, referring to U.S. Africa Command and Central Command, which is responsible for the Middle East and Afghanistan.

Two jumps with Cameroonian paratroopers, using U.S. aircraft and parachutes, have been planned as part of the upcoming exercise. One is sort of a ceremonial “wing exchange” employing Cameroonian jump masters, the other is more tactical. The landing field features 7-foot-tall grass, Weisman said.

Steppe, like most all of his troops, has never been to Africa. But he said they were happy to be tasked with the training.

“This is just a great opportunity to train with African partners,” he said. “We’re just going to go down there and get after it with them.”

In the spirit of team-building, the paratroopers were also planning to play in a soccer tournament, which was requested by the Africans, who are avid and expert players. Steppe said he expected to lose.

“I think I have one guy that’s played soccer,” he said.