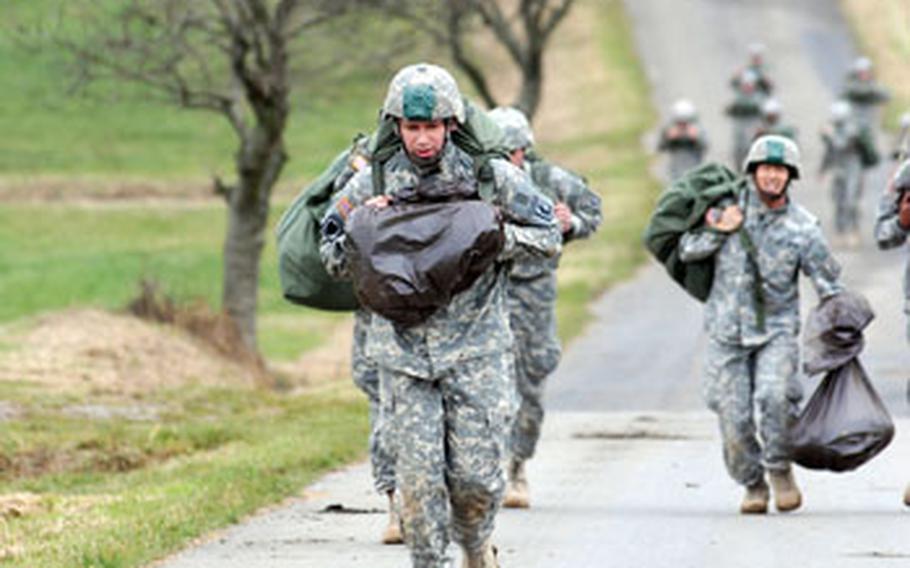 173rd Airborne soldiers carry their gear to a rally point after parachuting into fields near Ehenfeld, Germany, on Wednesday. (Photo by Seth Robson/S&S)

EHENFELD, Germany &#8212; Some 550 paratroops from the 173rd Airborne Brigade are making their first parachute jumps since the unit returned from a 15-month mission to Afghanistan.

On Wednesday, more than 200 of the "Sky Soldiers" leapt out of a pair of transport aircraft and floated through a cold, gray autumn sky into fields around the small Bavarian town of Ehenfeld, near Grafenw&#246;hr Training Area. More will jump later this week.

Ernest Roth, a maneuver liaison officer for the Army&#8217;s Joint Multinational Training Command, said crosswinds made the exercise challenging for the soldiers.

"We had to change the plan a bit to work with the weather," he said, as aircraft buzzed overhead beneath a cloud-base just high enough to allow the jump to proceed safely.

The Sky Soldiers are doing a "proficiency jump," which means they parachute without tactical equipment, he said.

That was just as well, because the wind slammed most of them into a sloping hillside in the drop zone. Cries of "medic" soon rang out from those who landed harder than they would have liked.

Roth said paratroops must do a proficiency jump every three months to keep their qualification when not deployed.

Spc. Adam Scott, 22, of Boone, N.C., got more of an adrenalin rush than most of the Sky Soldiers involved in the jump. Boone sailed over a cluster of trees only to find himself heading for one of several much larger trees in the drop zone.

Moments later, he was dangling by his parachute from the branches 12 feet above the ground.

"There were winds coming from different angles. I came over those trees but the wind pulled me into another tree," he said after freeing himself. "I thought I was going to hit the tree trunk and die. I was trying to slide away but the branches caught me."

He did that by deploying his reserve chute, unclipping from his harness and climbing down the reserve, he said.

"We train for it (escaping from a tree) to a point where it is second nature," he added.

Soon after the first parachutes hit the ground, the muddy soldiers picked up their gear and trudged up a farm road to the rally point.

Another Sky Soldier, Capt. Alex Newsom, 25, of Beverly Hills, Calif., said it felt good to be back jumping after 15 months downrange.

"At times like this, when I&#8217;m walking away from it, it is great. It is great to be part of an airborne unit. The esprit de corps is higher and we fight harder than other units," he said.

Does he expect to be parachuting into a combat zone anytime soon?