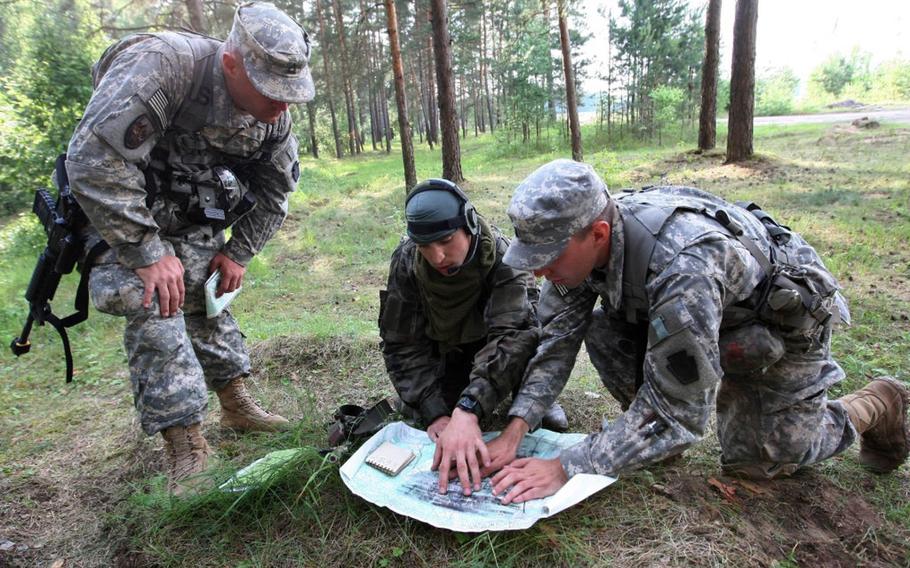 A Lithuanian Soldier and his U.S. counterparts study a map while making plans for a combined operation during exercise Saber Strike 2014. (U.S. Army)

A Lithuanian Soldier and his U.S. counterparts study a map while making plans for a combined operation during exercise Saber Strike 2014. (U.S. Army) 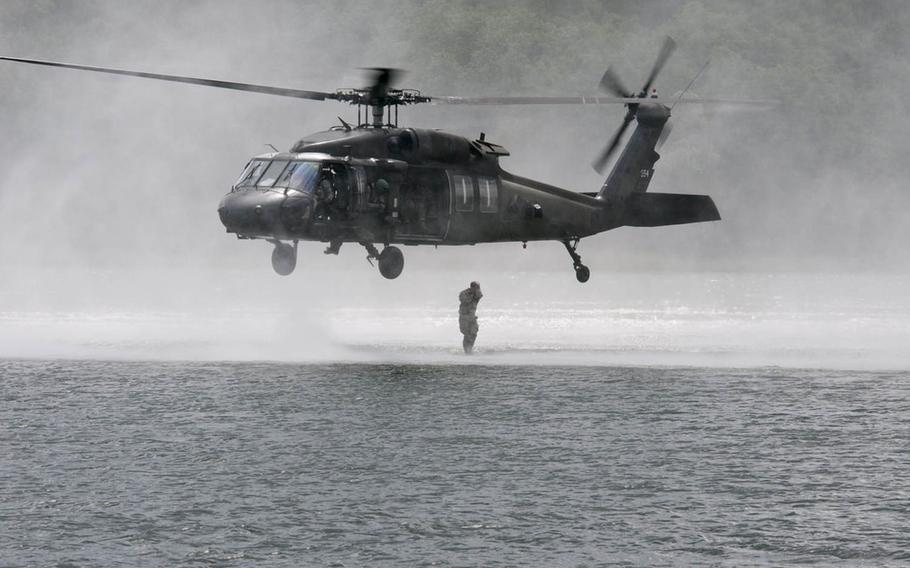 A U.S. Blackhawk helicopter from the Germany-based 12th Combat Aviation Brigade hovers above a lake at Drawsko-Pomorskie, Poland, June 14, 2014, while a paratroop from the 173rd Airborne Brigade's 1st Battalion, 503rd Infantry Regiment, jumps into the water during water survival training during training with Polish and Canadian forces. (Eric McDonough/U.S. Army) 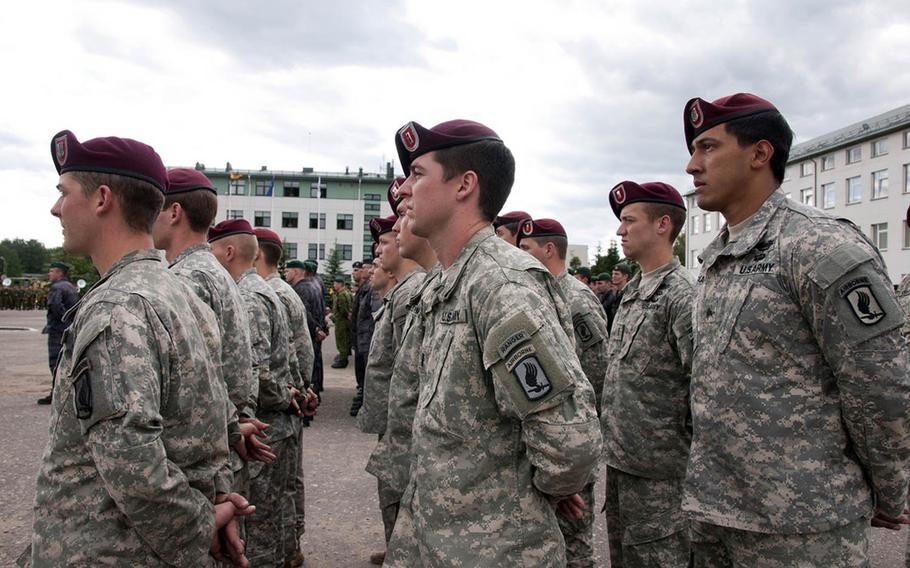 KAISERSLAUTERN, Germany — An American cavalry squadron based in Germany is heading to Poland and the Baltics to replace some 600 U.S. infantrymen who deployed there in April to reassure allies wary of Russian aggression in the region.

The 173rd Airborne Brigade’s 1st Squadron, 91st Cavalry Regiment, based in Grafenwöhr, will move in by the end of the month to replace the brigade’s 1st Battalion, 503rd Infantry Regiment, in Estonia, Latvia, Lithuania and Poland, a spokesman said. A smaller 173rd unit based in Vicenza, Italy, will augment the squadron in Poland.

The first rotation of 173rd soldiers deployed to the region were on Friday wrapping up a multinational military exercise — Saber Strike — involving some 4,700 personnel from 10 countries. Declaring that the U.S.-led war games demonstrated “hostile intent,” Russia last week launched a surprise exercise of its own in the tiny enclave of Kaliningrad, which border Poland and Lithuania. NATO jets were scrambled to intercept Russian warplanes several times over the past week.

Despite the rhetoric and posturing by Russia, the commander of the U.S. contingent that will take over in Latvia said he expects and is preparing for a “100 percent friendly environment.” The situation in the region “isn’t really so much a concern,” said Capt. Jonathan Patten, commander of 1st Squadron’s Troop C.

The battalion is scheduled to spend up to three months in the region before it’s relieved by another rotation from the 173rd.

“In length, it’s kind of a little bit longer than we might be used to” for a training rotation, Patten said. Because of that, it’s kind of like a deployment, “but the mission is 100 percent training focused.”

“There are a few large, already planned multinational exercises such as Saber Junction that we will participate in,” Maj. Michael Weisman, a 173rd spokesman, said in an email. The Sky Soldiers “will conduct everything from individual weapons qualification to platoon live fires together and of course, airborne operations.”

After Russia annexed Crimea from Ukraine, the Pentagon committed in April to having a persistent U.S. troop presence in the Baltics and Poland through at least the end of the year. Estonia, Latvia and Lithuania, all part of the Soviet Union until its breakup in 1991, and Poland, a former member of the Soviet-led Warsaw Pact military alliance, have all worked to distance themselves from Russia since the end of the Cold War. The Baltics joined the NATO alliance in 2004 and Poland in 1999, moves that the Kremlin viewed as a provocation, and all have since deployed forces to Afghanistan as part of the NATO-led International Security Assistance Force. With the war winding down, the alliance has expanded military exercises to maintain allies’ ability to operate alongside each other.

“As everybody’s learned over the last decade or so, a unified force doesn’t just come together on its own,” Patten said. “It takes a lot of effort.”