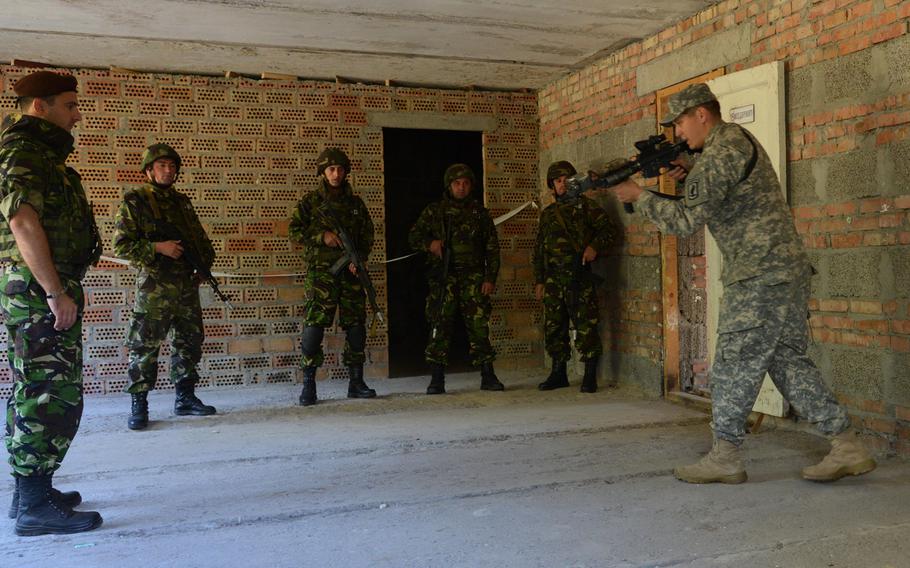 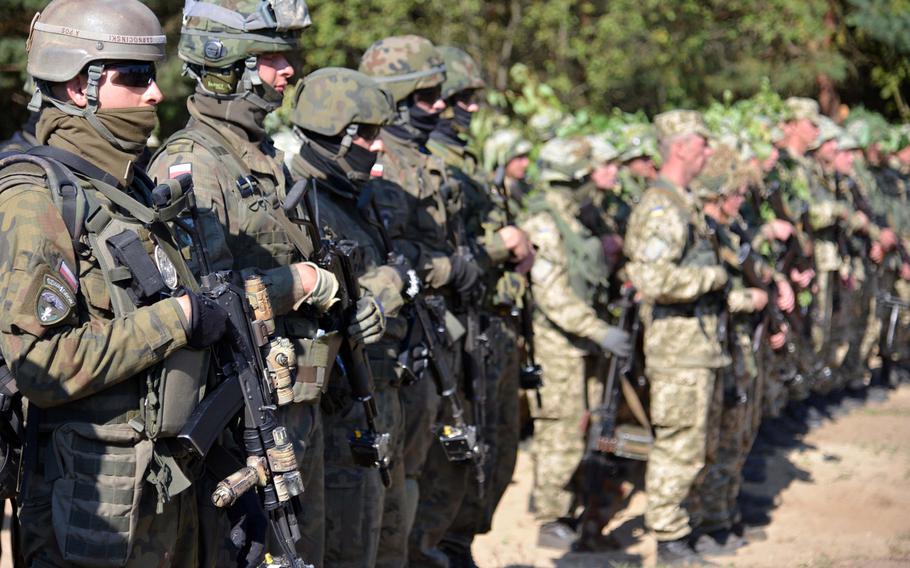 Buy Photo
Polish and Ukrainian troops stand in formation after completing a cordon-and- search scenario at Exercise Rapid Trident near Yavoriv, Ukraine, Friday, Sept. 19, 2014. It was media and VIP day at the exercise, where about 1,300 troops from 15 countries are taking part. (Michael Abrams/Stars and Stripes)

The U.S. Army’s 173rd Airborne Brigade on Friday concluded nearly two weeks of training in Ukraine, where more than 1,000 troops from 15 nations conducted a series of military drills and war games.

The U.S. Army Europe-led Rapid Trident exercise came during a time of turmoil for Ukraine, which has been fighting a Russia-backed insurgency in its eastern region since a revolution in February and Moscow’s annexation of the Crimea peninsula in March.

The exercise’s focus was on improving the combat capabilities of allies and ensuring they are capable of fighting together on the battlefield. The exercise was also meant to send a signal to Russia that the U.S. and allies stand with Ukraine, U.S. Army officials said.

As a non-NATO state, however, Ukraine doesn’t enjoy collective defense security guarantees that come with alliance membership. Despite expressions of support, the United States and NATO have made clear that they has no intention of intervening in the conflict.

From a military standpoint, officials say, the war games achieved their aim.

“I think it was extremely successful in terms of achieving interoperability between the nations, which worked very well together during the exercise,” said Capt. Royal Reff, a U.S. Army spokesman.

While Rapid Trident is a long-standing exercise in Europe, U.S. military officials have said it is part of an overall effort to increase the U.S. military presence in the broader region.

The Vicenza, Italy-based 173rd has been at the center of the effort, having spent nearly six months rotating through Poland, the Baltics and most recently Ukraine.

Now, the 173rd will get some relief as the U.S. Army’s 1st Brigade Combat Team, 1st Cavalry Division, will begin deploying as part of Atlantic Resolve, which is focused on ensuring a ongoing force presence in eastern Europe in response to Russian actions in Ukraine. The 1st Cavalry will operate in Estonia, Latvia, Lithuania and Poland with tanks, mechanized vehicles and other heavy military equipment.

“The intent is to reassure allies and adapt the alliance’s strategic military posture in response to regional security challenges,” he said.