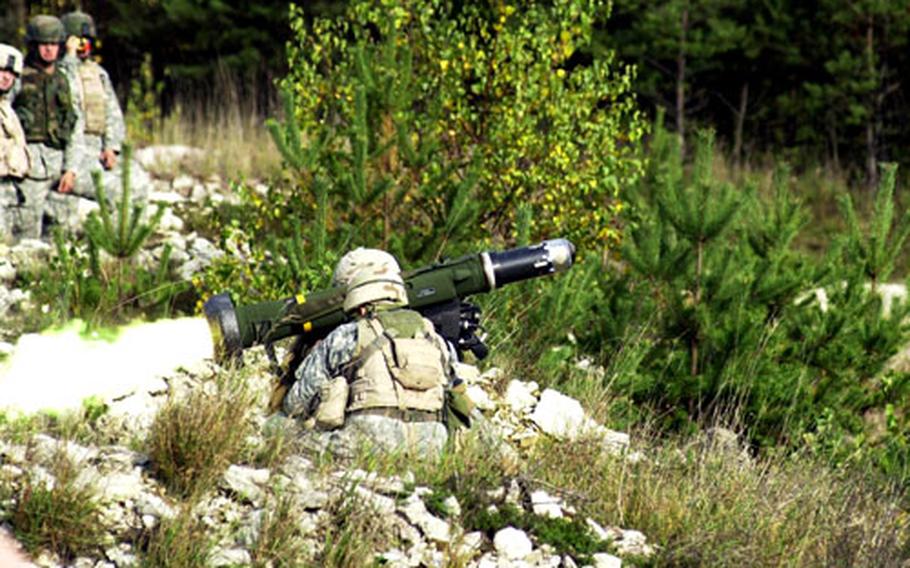 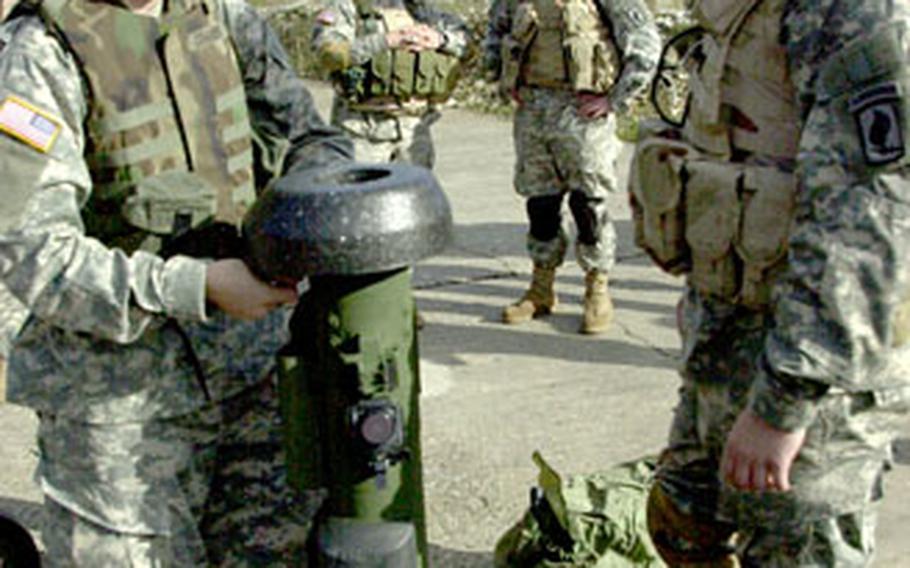 GRAFENW&#214;HR, Germany &#8212; The 173rd Airborne Brigade soldiers launched their Javelin missiles into the sky, then watched them thunder down on the turrets of derelict tanks in the training area.

The live-fire training was the culmination of a two-week Javelin training course for 36 soldiers. The top eight graduates got to fire the Javelins.

The live-fire training gives soldiers hands-on experience of how the weapon performs in a combat environment, said Maj. Norris Bodrick, logistics and fielding officer for the Close Combat Weapons Systems Project Office&#8211;Javelin in Huntsville, Ala.

Bodrick would not discuss the weapon&#8217;s capabilities, saying only that the Javelin is a &#8220;close- combat weapon used to impact various targets.&#8221;

Manufactured by Raytheon and Lockheed Martin, the Javelin is 3 feet 6 inches long, weighs 49.5 pounds, has a range of 1.5 miles, and takes two people to operate, according to the Army site.

As of October 2005, more than 1,000 rounds had been fired by U.S. and Australian troops and Marines at tanks and alternate targets in Iraq, according to a Raytheon/Lockheed Martin news release.

One of the soldiers who fired a Javelin this week, Sgt. Robert Hoover, 27, of Pensacola, Fla., said he fired one in 2002 and also fired the missile&#8217;s predecessor, the Dragon. The Company A, 1-503 soldier said the Dragon had a bigger blast and more kick than the Javelin and was easier for the enemy to detect.

&#8220;The Javelin is more accurate and more precise, and we can take cover as soon as it launches. With the Dragon you had to keep your cross hairs on the target all the way,&#8221; he said.

It was the first Javelin live-fire for Pfc. Eric Cramer, 19, of Phoenix. The Troop B, 1st Squadron, 91st Cavalry Regiment soldier said he&#8217;d never fired any kind of rocket or missile.